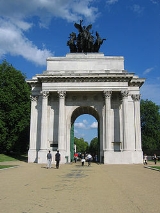 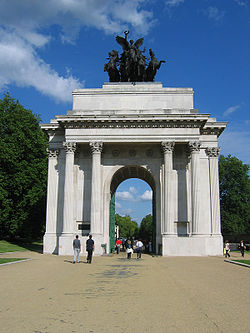 Hyde Park Corner is a place in London
London
London is the capital city of :England and the :United Kingdom, the largest metropolitan area in the United Kingdom, and the largest urban zone in the European Union by most measures. Located on the River Thames, London has been a major settlement for two millennia, its history going back to its...
, at the south-east corner of Hyde Park
Hyde Park, London
Hyde Park is one of the largest parks in central London, United Kingdom, and one of the Royal Parks of London, famous for its Speakers' Corner.The park is divided in two by the Serpentine...
. It is a major intersection where Park Lane
Park Lane (road)
Park Lane is a major road in the City of Westminster, in Central London.-History:Originally a country lane running north-south along what is now the eastern boundary of Hyde Park, it became a fashionable residential address from the eighteenth century onwards, offering both views across Hyde Park...
, Knightsbridge
Knightsbridge
Knightsbridge is a road which gives its name to an exclusive district lying to the west of central London. The road runs along the south side of Hyde Park, west from Hyde Park Corner, spanning the City of Westminster and the Royal Borough of Kensington and Chelsea...
, Piccadilly
Piccadilly
Piccadilly is a major street in central London, running from Hyde Park Corner in the west to Piccadilly Circus in the east. It is completely within the city of Westminster. The street is part of the A4 road, London's second most important western artery. St...
, Grosvenor Place and Constitution Hill
Constitution Hill, London
Constitution Hill is a road in the City of Westminster in London. It connects the western end of The Mall with Hyde Park Corner, and is bordered by Buckingham Palace Gardens and Green Park. The term "Hill" is something of a misnomer; there is barely detectable slope but most observers would...
converge. The closest tube station is Hyde Park Corner
Hyde Park Corner tube station
Hyde Park Corner is a London Underground station near Hyde Park Corner in Hyde Park. It is in Travelcard Zone 1, between Knightsbridge and Green Park on the Piccadilly Line.-History:...
.

In the centre of the roundabout stands Constitution Arch (or Wellington Arch
Wellington Arch
Wellington Arch, also known as Constitution Arch or the Green Park Arch, is a triumphal arch located to the south of Hyde Park in central London and at the north western corner of Green Park...
), designed by Decimus Burton
Decimus Burton
Decimus Burton was a prolific English architect and garden designer, He is particularly associated with projects in the classical style in London parks, including buildings at the Royal Botanic Gardens, Kew and London Zoo, and with the layout and architecture of the seaside towns of Fleetwood and...
as a memorial to the Duke of Wellington
Arthur Wellesley, 1st Duke of Wellington
Field Marshal Arthur Wellesley, 1st Duke of Wellington, KG, GCB, GCH, PC, FRS , was an Irish-born British soldier and statesman, and one of the leading military and political figures of the 19th century...
and originally providing a grand entrance to London. It was built as a northern gate to the grounds of Buckingham Palace
Buckingham Palace
Buckingham Palace, in London, is the principal residence and office of the British monarch. Located in the City of Westminster, the palace is a setting for state occasions and royal hospitality...
. Originally the arch was topped with an equestrian statue of the Duke
Wellington Statue, Aldershot
The Wellington Statue in Aldershot is a monument to Arthur Wellesley, 1st Duke of Wellington victor at the Battle of Waterloo and later Prime Minister of the United Kingdom...
by Matthew Cotes Wyatt
Matthew Cotes Wyatt
Matthew Cotes Wyatt was a painter and sculptor and a member of the Wyatt family, who were well-known in the Victorian era as architects and sculptors.-Early life:...
, but it was replaced with the current work, The Angel of Peace descending on the Quadriga
Quadriga
A quadriga is a car or chariot drawn by four horses abreast . It was raced in the Ancient Olympic Games and other contests. It is represented in profile as the chariot of gods and heroes on Greek vases and in bas-relief. The quadriga was adopted in ancient Roman chariot racing...
of Victory (1912) by Adrian Jones
Adrian Jones
Adrian Jones was an English sculptor and painter who specialized in animals, particularly horses. He was born in Ludlow, Shropshire, attending the grammar school there, and initially studied at the Royal Veterinary College; he subsequently joined the army as a veterinary officer, attaining the...
.

Other monuments at Hyde Park Corner include Jones's Monument to the Cavalry of the Empire (off the west side of Park Lane), Alexander Munro
Alexander Munro (sculptor)
Alexander Munro was a British sculptor of the Pre-Raphaelite movement.Son of a stonemason, his talents were supported by financial assistance from his father’s employer, the Duchess of Sutherland. He came to London in 1848 to study sculpture under Charles Barry...
's Boy and Dolphin statue (in a rose garden parallel to Rotten Row, going west from Hyde Park Corner), the Wellington Monument
Wellington Monument, London
It is best known for its colossal 18 foot high statue of Achilles by the sculptor Richard Westmacott, produced from melted-down captured enemy cannon...
(off the west side of Park Lane) and a statue of Byron
George Gordon Byron, 6th Baron Byron
George Gordon Byron, 6th Baron Byron, later George Gordon Noel, 6th Baron Byron, FRS , commonly known simply as Lord Byron, was a British poet and a leading figure in the Romantic movement...
(on a traffic island opposite the Wellington Monument).

In the post-war years Park Lane was widened and the area around the arch became a large traffic island, mostly laid to grass. The traffic island area includes a smaller equestrian statue of Wellington, the Machine Gun Corps Memorial
Machine Gun Corps Memorial
The Machine Gun Corps Memorial, also known as The Boy David, is a memorial to the dead of the Machine Gun Corps in the First World War at Hyde Park Corner in London. It is topped with a nude statue of a young David by Francis Derwent Wood. To either side of the statue is a real Vickers gun, encased...
, the Royal Artillery Memorial
Royal Artillery Memorial
The Royal Artillery Memorial is a stone memorial at Hyde Park Corner in London, dedicated to casualties in the British Royal Regiment of Artillery in First World War. The memorial was designed by Charles Jagger and Lionel Pearson, and features a giant sculpture of a BL 9.2 inch Mk I howitzer upon a...
, the Australian War Memorial
Australian War Memorial, London
The Australian War Memorial is a war memorial to the 102,000 Australian dead of the First and Second World Wars at Hyde Park Corner in London, at the southernmost corner of the traffic island around the Wellington Arch, at the junction of Grosvenor Place and Wellington Place.The memorial is a...
and the New Zealand War Memorial
New Zealand War Memorial, London
The New Zealand War Memorial is a war memorial to the war dead of New Zealand in the First and Second World Wars at Hyde Park Corner in London, at the Piccadilly end of the traffic island surrounding Wellington Arch and is diagonally opposite the Australian War Memorial.-Design:Designed by...
. An underpass beneath the junction allows traffic to flow freely
Grade separation
Grade separation is the method of aligning a junction of two or more transport axes at different heights so that they will not disrupt the traffic flow on other transit routes when they cross each other. The composition of such transport axes does not have to be uniform; it can consist of a...
between Knightsbridge
Knightsbridge
Knightsbridge is a road which gives its name to an exclusive district lying to the west of central London. The road runs along the south side of Hyde Park, west from Hyde Park Corner, spanning the City of Westminster and the Royal Borough of Kensington and Chelsea...
and Piccadilly
Piccadilly
Piccadilly is a major street in central London, running from Hyde Park Corner in the west to Piccadilly Circus in the east. It is completely within the city of Westminster. The street is part of the A4 road, London's second most important western artery. St...
. The Queen Elizabeth Gate and the Hyde Park Corner Screen are on the boundary of Hyde Park at Hyde Park Corner. To the north of the roundabout is Apsley House
Apsley House
Apsley House, also known as Number One, London, is the former London residence of the Dukes of Wellington. It stands alone at Hyde Park Corner, on the south-east corner of Hyde Park, facing south towards the busy traffic interchange and Wellington Arch...
, the home of the first Duke of Wellington. "Hyde Park Corner" was also used as a code to announce to the Government the death of King George VI
George VI of the United Kingdom
George VI was King of the United Kingdom and the Dominions of the British Commonwealth from 11 December 1936 until his death...
in 1952.