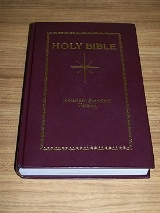 
History of the ASV 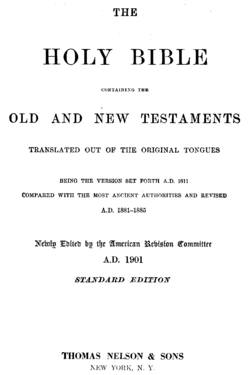 The American Standard Version is rooted in the work that was done with the Revised Version
Revised Version
The Revised Version of the Bible is a late 19th-century British revision of the King James Version of 1611. It was the first and remains the only officially authorized and recognized revision of the King James Bible. The work was entrusted to over 50 scholars from various denominations in Britain...
(RV). In 1870, an invitation was extended to American religious leaders for scholars to work on the RV project. A year later, 30 scholars were chosen by Philip Schaff
Philip Schaff
Philip Schaff , was a Swiss-born, German-educated Protestant theologian and a historian of the Christian church, who, after his education, lived and taught in the United States.-Biography:...
. These scholars began work in 1872.

In 1901, the 14 year agreement between the American and British teams expired, and the Revised Version, Standard American Edition, as the ASV Bible was officially called, was published by Thomas Nelson & Sons
Thomas Nelson (publisher)
Thomas Nelson is a publishing firm that began in Scotland in 1798 as the namesake of its founder. Its former US division is currently the sixth largest American trade publisher and the world's largest Christian publisher. It is owned by the private equity firm Kohlberg & Company...
that same year. It was copyrighted in North America
North America
North America is a continent wholly within the Northern Hemisphere and almost wholly within the Western Hemisphere. It is also considered a northern subcontinent of the Americas...
to ensure the purity of the ASV text. In 1928, the International Council of Religious Education (the body that later merged with the Federal Council of Churches to form the National Council of Churches
National Council of Churches
The National Council of the Churches of Christ in the USA is an ecumenical partnership of 37 Christian faith groups in the United States. Its member denominations, churches, conventions, and archdioceses include Mainline Protestant, Orthodox, African American, Evangelical, and historic peace...
) acquired the copyright from Nelson and renewed it the following year. The copyright was a reaction to tampering with the text of the Revised Version by some U.S. publishers, as noted above, allegedly in the interest of the American reading public, which was legally possible as there was never a U.S. copyright filed for the RV. By the time the ASV's copyright expired, interest in this translation had largely waned in the light of newer and more recent ones, and textual corruption hence never became the issue with the ASV that it had with the RV.


Reasons for the ASV

There were two rationales for the ASV. One reason was to obviate any justification for the unauthorized copied editions of the RV that had been circulating. Another reason was to use more of the suggestions the American team had preferred, since the British team used few of their suggestions in the first place, even in the later version which they had published incorporating some of them. Interestingly, while many of the suggestions of the American scholars were based on the differences between American and British usage, many others were based on differences in scholarship and what the American revisers felt the best translation to be. Consequently, there were several changes to the KJV text in the ASV that were not present in the RV.


Features of the ASV

The divine name of the Almighty (the Tetragrammaton
Tetragrammaton
The term Tetragrammaton refers to the name of the God of Israel YHWH used in the Hebrew Bible.-Hebrew Bible:...
) is consistently rendered Jehovah
Jehovah
Jehovah is an anglicized representation of Hebrew , a vocalization of the Tetragrammaton , the proper name of the God of Israel in the Hebrew Bible....
in the ASV Old Testament, rather than as it appears in the King James Bible. The reason for this change, as the Committee explained in the preface, was that "...the American Revisers...were brought to the unanimous conviction that a Jewish superstition, which regarded the Divine Name as too sacred to be uttered, ought no longer to dominate in the English or any other version of the Old Testament..." Other changes from the RV to the ASV included (but were not limited to) substituting "who" and "that" for "which" when referring to people, and Holy Ghost was dropped in favor of Holy Spirit
Holy Spirit
Holy Spirit is a term introduced in English translations of the Hebrew Bible, but understood differently in the main Abrahamic religions.While the general concept of a "Spirit" that permeates the cosmos has been used in various religions Holy Spirit is a term introduced in English translations of...
. Page headings were added and footnotes were improved.


Revisions of the ASV


Usage of the ASV By Jehovah's Witnesses

The ASV has been used for many years by the Jehovah's Witnesses
Jehovah's Witnesses
Jehovah's Witnesses is a millenarian restorationist Christian denomination with nontrinitarian beliefs distinct from mainstream Christianity. The religion reports worldwide membership of over 7 million adherents involved in evangelism, convention attendance of over 12 million, and annual...
. The reasons for their choosing of the ASV were twofold: One reason for adoption of the ASV was due to its usage of "Jehovah" as the Divine Name, which was congruent with their doctrine
Doctrine
Doctrine is a codification of beliefs or a body of teachings or instructions, taught principles or positions, as the body of teachings in a branch of knowledge or belief system...
, and they derived their name from Isaiah 43.10, 12, both of which contain the phrase, "Ye are my witnesses, saith Jehovah." Also, there was a perception that the ASV had improved the translation of some verses in the King James Version, and in other places it reduced the verses that they found to be erroneously translated in the KJV to mere footnotes, removed from the main text altogether.


The ASV as the Basis of Philippine Bibles

Because of its popularity in the American Standard Version in the early years of the 20th Century, this has been the basis of the Philippine Bible Society in translating the first editions of the Bible in the different Philippine Languages
Philippine languages
The Philippine languages are a 1991 proposal by Robert Blust that all the languages of the Philippines and northern Sulawesi—except Sama–Bajaw and a few languages of Palawan—form a subfamily of Austronesian languages...
. Now a public domain, 'Ang Biblia' (titles for the Tagalog
Tagalog language
Tagalog is an Austronesian language spoken as a first language by a third of the population of the Philippines and as a second language by most of the rest. It is the first language of the Philippine region IV and of Metro Manila...
, Cebuano
Cebuano language
Cebuano, referred to by most of its speakers as Bisaya , is an Austronesian language spoken in the Philippines by about 20 million people mostly in the Central Visayas. It is the most widely spoken of the languages within the so-named Bisayan subgroup and is closely related to other Filipino...
, Hiligaynon
Hiligaynon language
Hiligaynon, often referred to as Ilonggo, is an Austronesian language spoken in the Western Visayas region of the Philippines.Hiligaynon is concentrated in the provinces of Iloilo, Negros Occidental and Capiz but is also spoken in the other provinces of the Panay Island group, including Antique,...
and Waray
Waray language
Waray may refer to:* The Waray language of Australia* The Waray-Waray language of the Philippines...
), 'Ti Biblia' (the Ilocano title), and 'Say Biblia' (the Pangasinan
Pangasinan language
The Pangasinan language or Pangasinense is one of the twelve major languages in the Philippines....
title) used the ASV as their basis. This is very evident by the use of the name Jehovah
Jehovah
Jehovah is an anglicized representation of Hebrew , a vocalization of the Tetragrammaton , the proper name of the God of Israel in the Hebrew Bible....
instead of the more commonly accepted Yahweh
Yahweh
Yahweh is the name of God in the Bible, the God of Abraham, Isaac, Jacob, Jews and Christians.The word Yahweh is a modern scholarly convention for the Hebrew , transcribed into Roman letters as YHWH and known as the Tetragrammaton, for which the original pronunciation is unknown...
in the later translations.

The American Standard Version has passed into antiquity, and with the expired copyright, it has passed into the public domain. Rare antique editions are extremely hard to find. Literature departments of various congregations of the Jehovah's Witnesses in the USA report that the Watchtower Society no longer prints the American Standard Version Holy Bible nor any other Bible (other than the Watchtower's own New World Translation and Kingdom Interlinear translations) and thus no longer supplies them to the congregations, however some individual congregations of the Jehovah's Witnesses may still have some ASV Bibles in stock and available to the public. A standard Christian mail order publisher, Star Bible continues to make the ASV available and recently High Village Publishing began doing so also (but the ones by High Village Publishing have each verse as a separate paragraph), but it now appears that High Village Publishing has gone out of business. Gospel Light Publishing Company publishes ASV New Testament editions (including a large print edition), they even publish the "People's New Testament with Notes" which is a commentary which includes a parallel New Testament that includes the Revised Version New Testament of 1881. In July 2011, a Bible without verse numbers, American Standard Version, was made available. There appears to be a growing interest in the ASV, in part because it is included as one of the versions in most recently released Bible related CD-ROMs. It is also available in most Bible gateway Internet sites.