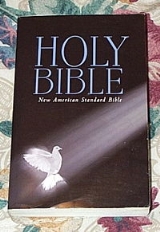 Encyclopedia
The New American Standard Bible (NASB), also informally called New American Standard Version (NASV), is an English
English language
English is a West Germanic language that arose in the Anglo-Saxon kingdoms of England and spread into what was to become south-east Scotland under the influence of the Anglian medieval kingdom of Northumbria...
translation
Translation
Translation is the communication of the meaning of a source-language text by means of an equivalent target-language text. Whereas interpreting undoubtedly antedates writing, translation began only after the appearance of written literature; there exist partial translations of the Sumerian Epic of...
of the Bible
Bible
The Bible refers to any one of the collections of the primary religious texts of Judaism and Christianity. There is no common version of the Bible, as the individual books , their contents and their order vary among denominations...
.
The New Testament
New Testament
The New Testament is the second major division of the Christian biblical canon, the first such division being the much longer Old Testament....
was first published in 1963. The complete Bible was published in 1971. The most recent edition of the NASB text was published in 1995. Copyright and trademark to the NASB text are owned by the Lockman Foundation
Lockman Foundation
The Lockman Foundation was started in 1942 by F. Dewey Lockman and his wife Minna Lockman. It is a nonprofit, interdenominational Christian ministry dedicated to the translation, publication, and distribution of the New American Standard Bible , Amplified Bible and other Biblical resources.The...
.

The NASB was published in the following stages

The New American Standard Bible is widely regarded as the most literally translated of 20th-century English Bible translations. According to the NASB's preface, the translators had a "Fourfold Aim" in this work:

The Hebrew text used for this translation was the third edition of Rudolf Kittel's Biblia Hebraica, as well as the Dead Sea Scrolls
Dead Sea scrolls
The Dead Sea Scrolls are a collection of 972 texts from the Hebrew Bible and extra-biblical documents found between 1947 and 1956 on the northwest shore of the Dead Sea, from which they derive their name...
. The Biblia Hebraica Stuttgartensia was consulted for the 1995 revision. For Greek, Eberhard Nestle's Novum Testamentum Graece was used; the 23rd edition in the 1971 original, and the 26th in the 1995 revision. 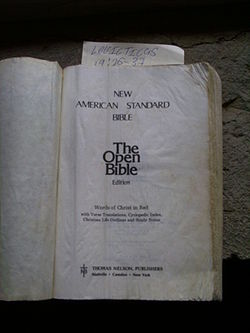 Seeing the need for a literal, modern translation of the English Bible, the translators sought to produce a contemporary English Bible while maintaining a word-for-word translation style. In cases where word-for-word literalness was determined to be unacceptable for modern readers, changes were made in the direction of more current idiom
Idiom
Idiom is an expression, word, or phrase that has a figurative meaning that is comprehended in regard to a common use of that expression that is separate from the literal meaning or definition of the words of which it is made...
s. In such instances, the more literal renderings were indicated in footnotes.

The greatest perceived strength of the NASB is its reliability and fidelity to the original languages, which, along with other literal translations, also allows for ambiguities in the text's meaning. Its corresponding weakness is that its readability and literary style sometimes prove confusing to the average reader. In addition, its printing of verses as individual units instead of paragraphs makes the text appear fragmented (though more recent editions are available in paragraph format).

In 1992, the Lockman Foundation commissioned a limited revision of the NASB. In 1995, the Lockman Foundation reissued the NASB text as the NASB Updated Edition (more commonly, the Updated NASB or NASB95). Since then, it has become widely known as simply the "NASB", supplanting the 1977 text in current printings, save for a few (Thompson Chain Reference Bibles, Open Bibles, Key Word Study Bibles, et al.).

In the updated NASB, consideration was given to the latest available manuscripts with an emphasis on determining the best Greek text. Primarily, the 26th edition of Nestle-Aland’s Novum Testamentum Graece is closely followed. The Biblia Hebraica Stuttgartensia is also employed together with the most recent light from lexicography
Lexicography
Lexicography is divided into two related disciplines:*Practical lexicography is the art or craft of compiling, writing and editing dictionaries....
, cognate languages, and the Dead Sea Scrolls.

The updated NASB represents recommended revisions and refinements, and incorporates thorough research based on current English usage. Vocabulary
Vocabulary
A person's vocabulary is the set of words within a language that are familiar to that person. A vocabulary usually develops with age, and serves as a useful and fundamental tool for communication and acquiring knowledge...
, grammar
Grammar
In linguistics, grammar is the set of structural rules that govern the composition of clauses, phrases, and words in any given natural language. The term refers also to the study of such rules, and this field includes morphology, syntax, and phonology, often complemented by phonetics, semantics,...
, and sentence structure were meticulously revised for greater understanding and smoother reading, hence increasing clarity and readability
Readability
Readability is the ease in which text can be read and understood. Various factors to measure readability have been used, such as "speed of perception," "perceptibility at a distance," "perceptibility in peripheral vision," "visibility," "the reflex blink technique," "rate of work" , "eye...
. Nonmodern English terms such as "thy" and "thou" have been modernized, while verses with difficult word ordering are restructured. Punctuation and paragraphing have been formatted for modernization, and verbs with multiple meanings have been updated to better account for their contextual usage.

YHWH (rendered as "Jehovah
Jehovah
Jehovah is an anglicized representation of Hebrew , a vocalization of the Tetragrammaton , the proper name of the God of Israel in the Hebrew Bible....
" in the original A.S.V.) is rendered LORD or GOD in capital letters in the NASB. The committee stated the reason as: "This name has not been pronounced by the Jews because of reverence for the great sacredness of the divine name. Therefore it has been consistently translated LORD. The only exception is when it occurs in immediate proximity to the word Lord, that is, Adonai. In that case it is regularly translated GOD in order to avoid confusion. It is known that for many years YHWH has been transliterated as Yahweh, however no complete certainty attaches to this pronunciation." This is in direct contrast to the preface of ASV of 70 years earlier, where the committee explained that "the American Revisers...were brought to the unanimous conviction that a Jewish superstition, which regarded the Divine Name as too sacred to be uttered, ought no longer to dominate in the English or any other version of the Old Testament."

The revised NASB (1995) involved over 20 translators from a variety of denominational backgrounds who are conservative Bible scholars with doctorates in biblical languages, theology, or other advanced degrees.