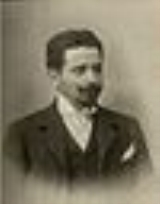 Encyclopedia
Afonso Augusto da Costa, GCTE
Order of the Tower and Sword
The Military Order of the Tower and of the Sword, of Valour, Loyalty and Merit is a Portuguese order of knighthood and the pinnacle of the Portuguese honours system. It was created by King Afonso V in 1459....
, GCL
Order of Liberty
The Order of Liberty, or Freedom, is a Portuguese honorific civil order that distinguishes relevant services to the cause of democracy and freedom, in the defense of the values of civilization and human dignification...
(ɐˈfõsu ˈkɔʃtɐ; born at Seia
Seia
Seia Municipality is located in Guarda District in Portugal. It has a total area of 435.7 km² and a total population of 27,574 inhabitants. Its urban population is about 7,000...
, 6 March 1871; died at Paris
Paris
Paris is the capital and largest city in France, situated on the river Seine, in northern France, at the heart of the Île-de-France region...
, 11 May 1937) was a Portuguese
Portuguese people
The Portuguese are a nation and ethnic group native to the country of Portugal, in the west of the Iberian peninsula of south-west Europe. Their language is Portuguese, and Roman Catholicism is the predominant religion....
lawyer
Lawyer
A lawyer, according to Black's Law Dictionary, is "a person learned in the law; as an attorney, counsel or solicitor; a person who is practicing law." Law is the system of rules of conduct established by the sovereign government of a society to correct wrongs, maintain the stability of political...
, professor
Professor
A professor is a scholarly teacher; the precise meaning of the term varies by country. Literally, professor derives from Latin as a "person who professes" being usually an expert in arts or sciences; a teacher of high rank...
, and republican
Republicanism
Republicanism is the ideology of governing a nation as a republic, where the head of state is appointed by means other than heredity, often elections. The exact meaning of republicanism varies depending on the cultural and historical context...
politician
Politician
A politician, political leader, or political figure is an individual who is involved in influencing public policy and decision making...
.

During this period Costa signed the controversial laws that expelled the Jesuits from Portugal, abolished all the religious orders, and established the separation of church and state. These things made him a symbol of the anticlericalism of the First Republic
Portuguese First Republic
The Portuguese First Republic spans a complex 16 year period in the history of Portugal, between the end of the period of constitutional monarchy marked by the 5 October 1910 revolution and the 28 May coup d'état of 1926...
. Also, he was instrumental in the passage of many other progressive laws, such as those concerning divorce, family relations, civil registry of marriage, leases of property, judicial reorganization, industrial accidents, and censorship of the press.

He served as Prime Minister of Portugal
Portugal
Portugal , officially the Portuguese Republic is a country situated in southwestern Europe on the Iberian Peninsula. Portugal is the westernmost country of Europe, and is bordered by the Atlantic Ocean to the West and South and by Spain to the North and East. The Atlantic archipelagos of the...
three times. The first time, he was called by President Manuel de Arriaga
Manuel de Arriaga
Manuel José de Arriaga Brum da Silveira e Peyrelongue was a Portuguese lawyer, the first Attorney-General and the first elected President of the First Portuguese Republic, following the abdication of King Manuel II of Portugal and a Republican Provisional Government headed by Teófilo Braga Manuel...
to form the government, as the leader of the Republican Democratic Party. This term of office (which he combined with the role of Finance Minister) lasted from 9 January 1913 to 9 February 1914. He returned to power, as Prime Minister and Finance Minister, from 29 November 1915 to 16 March 1916.

Following more political instability Costa was yet again Prime Minister, from 25 April 1917 to 8 December 1917, in a national-unity government nicknamed the Sacred Union, to support Portugal's entrance into World War I
World War I
World War I , which was predominantly called the World War or the Great War from its occurrence until 1939, and the First World War or World War I thereafter, was a major war centred in Europe that began on 28 July 1914 and lasted until 11 November 1918...
. After Sidónio Pais
Sidónio Pais
Sidónio Bernardino Cardoso da Silva Pais was a Portuguese politician and diplomat, the fourth President in 1918. He was known as the President-King.-Family:...
's military coup d'état
Coup d'état
A coup d'état state, literally: strike/blow of state)—also known as a coup, putsch, and overthrow—is the sudden, extrajudicial deposition of a government, usually by a small group of the existing state establishment—typically the military—to replace the deposed government with another body; either...
in December 1917, Costa went into exile in Paris, and though he did sometimes return briefly to Portugal, he never again lived there, even after Pais's assassination in 1918.

On a number of other occasions during the First Republic
Portuguese First Republic
The Portuguese First Republic spans a complex 16 year period in the history of Portugal, between the end of the period of constitutional monarchy marked by the 5 October 1910 revolution and the 28 May coup d'état of 1926...
, Costa received invitations to head the government again, but he always refused. After the 28 May coup d'état, he strongly opposed the military dictatorship
Ditadura Nacional
The Ditadura Nacional was the name of the Portuguese regime initiated by the election of President Óscar Carmona in 1928 that lasted until the adoption of the new constitution in 1933, when the régime changed its name to Estado Novo...
; he equally opposed the right-wing civilian Catholic Estado Novo (New State) administration led from 1932 by Dr. Salazar
António de Oliveira Salazar
António de Oliveira Salazar, GColIH, GCTE, GCSE served as the Prime Minister of Portugal from 1932 to 1968. He also served as acting President of the Republic briefly in 1951. He founded and led the Estado Novo , the authoritarian, right-wing government that presided over and controlled Portugal...
. He died in Paris
Paris
Paris is the capital and largest city in France, situated on the river Seine, in northern France, at the heart of the Île-de-France region...
on 11 May 1937.

Costa was given up at birth as a foundling
Child abandonment
Child abandonment is the practice of relinquishing interests and claims over one's offspring with the intent of never again resuming or reasserting them. Causes include many social and cultural factors as well as mental illness. An abandoned child is called a foundling .-Causes:Poverty is often a...
at the wheel of the Santa Casa da Misericórdia
Santa Casa da Misericórdia
The Santa Casa da Misericórdia is a Portuguese charity founded in Lisbon in 1498 by the Queen Leonor of Portugal....
(Holy House of Mercy) of the town of Seia
Seia
Seia Municipality is located in Guarda District in Portugal. It has a total area of 435.7 km² and a total population of 27,574 inhabitants. Its urban population is about 7,000...
in north-central Portugal
Portugal
Portugal , officially the Portuguese Republic is a country situated in southwestern Europe on the Iberian Peninsula. Portugal is the westernmost country of Europe, and is bordered by the Atlantic Ocean to the West and South and by Spain to the North and East. The Atlantic archipelagos of the...
. By way of explanation:

"The Santa Casa da Misericórdia was founded [in Lisbon] in 1582, by Jose de Anchieta, a Jesuit. It is opened to the poor of every nation and religion, and affords a refuge to foundlings and orphans. The foundlings are deposited in a revolving wheel, which is placed perpendicularly in the wall. The wheel is divided into four apartments, one of which opens without. The heartless mother who wishes to part with her infant child, has only to deposit it in the box, and a revolution of the wheel passes it within the walls, never more to be reclaimed."

He was married in Coimbra
Coimbra
Coimbra is a city in the municipality of Coimbra in Portugal. Although it served as the nation's capital during the High Middle Ages, it is better-known for its university, the University of Coimbra, which is one of the oldest in Europe and the oldest academic institution in the...
on 15 September 1892 to Alzira Coelho de Campos de Barros de Abreu (born at Oliveira do Hospital
Oliveira do Hospital
Oliveira do Hospital is a municipality in the old district of Coimbra, in the central part of continental Portugal.-History:Inhabited by ancient civilizations, Oliveira do Hospital has Roman settlements, Visigothic relics, noble Gothic mansions as well as ancient villages built of slate...
, 20 April 1876; died at Lisbon
Lisbon
Lisbon is the capital city and largest city of Portugal with a population of 545,245 within its administrative limits on a land area of . The urban area of Lisbon extends beyond the administrative city limits with a population of 3 million on an area of , making it the 9th most populous urban...
, 1970), the daughter of Albano Mendes de Abreu, a medical doctor, and his wife, Emília de Barros Coelho de Campos. She was the sister of the writer
Writer
A writer is a person who produces literature, such as novels, short stories, plays, screenplays, poetry, or other literary art. Skilled writers are able to use language to portray ideas and images....
, José de Barros Mendes de Abreu, who was born at Oleiros, Vilar Barroco, 20 July 1878.

Costa's wife is an ancestor of the modern-day actresses, Sofia Sá da Bandeira and Catarina Wallenstein.