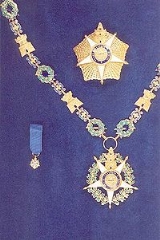 Order of the Tower and Sword
Topic Home
Discussion
0

Encyclopedia
The Military Order of the Tower and of the Sword, of Valour, Loyalty and Merit is a Portuguese
Portugal
Portugal , officially the Portuguese Republic is a country situated in southwestern Europe on the Iberian Peninsula. Portugal is the westernmost country of Europe, and is bordered by the Atlantic Ocean to the West and South and by Spain to the North and East. The Atlantic archipelagos of the...
order of knighthood and the pinnacle of the Portuguese honours system
Honorific orders of Portugal
Honorific orders of Portugal is the attribution of decoration to individuals personal bravery, achievement, or service to Portugal. Portugal has had a long tradition in rewarding its citizens....
. It was created by King Afonso V
Afonso V of Portugal
Afonso V KG , called the African , was the twelfth King of Portugal and the Algarves. His sobriquet refers to his conquests in Northern Africa.-Early life:...
in 1459.

It fell into disuse and was revived on 29 November 1808, by Prince Regent John, later John VI of Portugal
John VI of Portugal
John VI John VI John VI (full name: João Maria José Francisco Xavier de Paula Luís António Domingos Rafael; (13 May 1767 – 10 March 1826) was King of the United Kingdom of Portugal, Brazil and the Algarves (later changed to just King of Portugal and the Algarves, after Brazil was recognized...
. It commemorated the safe arrival of the Royal Family
Transfer of the Portuguese Court to Brazil
The Transfer of the Portuguese Court to Brazil was an episode in the history of Portugal and the history of Brazil in which the Portuguese royal family and its court escaped from Lisbon on November 29, 1807 to Brazil, just days before Napoleonic forces captured the city on December 1...
in Brazil
Brazil
Brazil , officially the Federative Republic of Brazil , is the largest country in South America. It is the world's fifth largest country, both by geographical area and by population with over 192 million people...
, after Napoleon had invaded Portugal. Its full title was “the Royal Order of the Tower and Sword”. It was available to both Portuguese and foreigners and for military, political or civilian achievement. Among the intended recipients were subjects of His Britannic Majesty, who had assisted the Royal Family to reach Brazil, but who were ineligible for the other Portuguese orders due to their religion.

The re-formed order had four classes:

In 1896 the class of Grand Officer was inserted between Grand Cross and Commander.

On 15 October 1910 the Republican government of Portugal abolished all military orders, with the exception of the Order of the Tower and Sword. Despite the fact that the order had not been abolished, on 26 September 1917 the order was revised for the third time. The order had four classes, the highest of which was confined to the President of the Republic of Portugal.

In 1918, the Order was expanded to five classes:

The President is ex officio the Order’s Grand Master and a member of the Order, Grand Cross.

The degree of Grand Collar was added in 1939. It was awarded only to Heads of State
Head of State
A head of state is the individual that serves as the chief public representative of a monarchy, republic, federation, commonwealth or other kind of state. His or her role generally includes legitimizing the state and exercising the political powers, functions, and duties granted to the head of...
with notable military deeds, and it was first conferred on Francisco Franco
Francisco Franco
Francisco Franco y Bahamonde was a Spanish general, dictator and head of state of Spain from October 1936 , and de facto regent of the nominally restored Kingdom of Spain from 1947 until his death in November, 1975...
, Caudillo
Caudillo
Caudillo is a Spanish word for "leader" and usually describes a political-military leader at the head of an authoritarian power. The term translates into English as leader or chief, or more pejoratively as warlord, dictator or strongman. Caudillo was the term used to refer to the charismatic...
of Spain. Since 1963 it has only been awarded to Presidents of Portugal.

The Order of the Tower and Sword, as awarded by the Portuguese government today, comes in six classes: