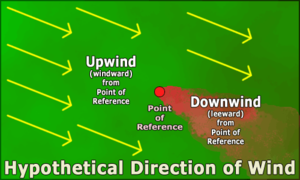 Windward is the direction upwind from the point of reference. Leeward is the direction downwind from the point of reference. The side of a ship that is towards the leeward is its lee side. If the vessel is heeling under the pressure of the wind, this will be the "lower side". During the age of sail, the term "weather" was used as as a synonym for "windward" in some contexts, as in "the weather gauge."

The traditional nautical pronunciations are the elide
Relaxed pronunciation
Relaxed pronunciation is a phenomenon that happens when the syllables of common words are slurred together...
d forms ˈljuːərd and ˈwɪnərd. However, nowadays these are sometimes regarded as old-fashioned, and the more literal ˈliːwərd and ˈwɪndwərd are common. The pronunciation for the Leeward
Leeward Islands
The Leeward Islands are a group of islands in the West Indies. They are the northern islands of the Lesser Antilles chain. As a group they start east of Puerto Rico and reach southward to Dominica. They are situated where the northeastern Caribbean Sea meets the western Atlantic Ocean...
and Windward Islands
Windward Islands
The Windward Islands are the southern islands of the Lesser Antilles, within the West Indies.-Name and geography:The Windward Islands are called such because they were more windward to sailing ships arriving in the New World than the Leeward Islands, given that the prevailing trade winds in the...
and the Leeward Antilles
Leeward Antilles
The Leeward Antilles are a chain of islands in the Caribbean – specifically, the southerly islands of the Lesser Antilles along the southeastern fringe of the Caribbean Sea, just north of the Venezuelan coast of the South American mainland...
is normally the latter form.

The terms "leeward" and "windward" refer respectively to what a game stalker
Game stalker
Defined narrowly, a game stalker is a hunter who for sport, approaches close to its timid quarry before making a kill. The practice is commonly associated with the moors of Scotland where the principal quarry is red deer. However, the skill is found worldwide and is of extremely long standing...
would call downwind and upwind. The terms are used by seamen in relation to their ships but also in reference to islands in an archipelago
Archipelago
An archipelago , sometimes called an island group, is a chain or cluster of islands. The word archipelago is derived from the Greek ἄρχι- – arkhi- and πέλαγος – pélagos through the Italian arcipelago...
and to the different sides of a single island. In the latter case, the windward side is that side of an island subject to the prevailing wind, and is thus the wetter side (see orographic precipitation
Precipitation (meteorology)
In meteorology, precipitation In meteorology, precipitation In meteorology, precipitation (also known as one of the classes of hydrometeors, which are atmospheric water phenomena is any product of the condensation of atmospheric water vapor that falls under gravity. The main forms of precipitation...
). The leeward side is the side protected by the elevation of the island from the prevailing wind, and is typically the drier side of an island. Thus, leeward or windward siting is an important weather
Weather
Weather is the state of the atmosphere, to the degree that it is hot or cold, wet or dry, calm or stormy, clear or cloudy. Most weather phenomena occur in the troposphere, just below the stratosphere. Weather refers, generally, to day-to-day temperature and precipitation activity, whereas climate...
and climate
Climate
Climate encompasses the statistics of temperature, humidity, atmospheric pressure, wind, rainfall, atmospheric particle count and other meteorological elemental measurements in a given region over long periods...
factor on oceanic islands.

In aviation, "downwind" refers to a portion of an aircraft's landing pattern
Airfield traffic pattern
An airfield traffic pattern is a standard path followed by aircraft when taking off or landing, while maintaining visual contact with the airfield....
, the long side parallel to the runway but flown in the opposite direction is called the downwind leg.

On land, "downwind" is often used to refer to a situation where a point source
Point source
A point source is a localised, relatively small source of something.Point source may also refer to:*Point source , a localised source of pollution**Point source water pollution, water pollution with a localized source...
of air pollution
Air pollution
Air pollution is the introduction of chemicals, particulate matter, or biological materials that cause harm or discomfort to humans or other living organisms, or cause damage to the natural environment or built environment, into the atmosphere....
or a scent moves from a point upwind; from the direction of the wind to the point of the observer.

"Downwind" has specific connotations in industrial cities in the English North, where less desirable or expensive housing was often situated to the leeward of steelworks, blast furnaces, mills or other sources of intense pollution. Hence in some cities it is used as a generic, slang, pejorative and discriminatory term for less wealthy areas or their inhabitants.

Windward and leeward directions are important factors to consider when sailing
Sailing
Sailing is the propulsion of a vehicle and the control of its movement with large foils called sails. By changing the rigging, rudder, and sometimes the keel or centre board, a sailor manages the force of the wind on the sails in order to move the boat relative to its surrounding medium and...
a sailing ship
Sailing ship
The term sailing ship is now used to refer to any large wind-powered vessel. In technical terms, a ship was a sailing vessel with a specific rig of at least three masts, square rigged on all of them, making the sailing adjective redundant. In popular usage "ship" became associated with all large...
- see points of sail
Points of sail
Points of sail describes a sailing boat's course in relation to the wind direction.There is a distinction between the port tack and the starboard tack. If the wind is coming from anywhere on the port side, the boat is on port tack. Likewise if the wind is coming from the starboard side, the boat...
. Other terms with broadly the same meaning are widely used, particularly "upwind" and "downwind", and many variations using the metaphor of height ("come up", "drop down", "we're pointing higher than them", "head below that mark", and so on).

The windward vessel is normally the more maneuverable vessel. For this reason, rule 12 of the International Regulations for Preventing Collisions at Sea
International Regulations for Preventing Collisions at Sea
The International Regulations for Preventing Collisions at Sea 1972 are published by the International Maritime Organization , and set out, inter alia, the "rules of the road" or navigation rules to be followed by ships and other vessels at sea in order to prevent collisions between two or more...
stipulate that the leeward vessel has right of way over the windward vessel. Similarly, a square rig
Square rig
Square rig is a generic type of sail and rigging arrangement in which the primary driving sails are carried on horizontal spars which are perpendicular, or square, to the keel of the vessel and to the masts. These spars are called yards and their tips, beyond the last stay, are called the yardarms...
ged warship would often try to enter battle from the windward direction (or "hold the weather gauge"), thus gaining an important tactical advantage over the opposing warship – the warship to windward could choose when to engage and when to withdraw. The opposing warship to leeward could often do little but comply without exposing itself unduly. This was particularly important once artillery
Artillery
Originally applied to any group of infantry primarily armed with projectile weapons, artillery has over time become limited in meaning to refer only to those engines of war that operate by projection of munitions far beyond the range of effect of personal weapons...
was introduced to naval warfare. The ships heeled away from the wind so that the leeward vessel was exposing part of her bottom to shot. If damaged "between wind and water" (i.e., in the exposed section of the hull) she was consequently in danger of sinking when on the other tack. See Spanish Armada.

The term "lee" derives from Old English hleo, "shelter", and was in use at least as early as 900 AD.