The Leeward Islands ˈliːwərd are a group of islands in the West Indies. They are the northern islands of the Lesser Antilles
Lesser Antilles
The Lesser Antilles are a long, partly volcanic island arc in the Western Hemisphere. Most of its islands form the eastern boundary of the Caribbean Sea with the Atlantic Ocean, with the remainder located in the southern Caribbean just north of South America...
chain. As a group they start east of Puerto Rico
Puerto Rico
Puerto Rico , officially the Commonwealth of Puerto Rico , is an unincorporated territory of the United States, located in the northeastern Caribbean, east of the Dominican Republic and west of both the United States Virgin Islands and the British Virgin Islands.Puerto Rico comprises an...
and reach southward to Dominica
Dominica
Dominica , officially the Commonwealth of Dominica, is an island nation in the Lesser Antilles region of the Caribbean Sea, south-southeast of Guadeloupe and northwest of Martinique. Its size is and the highest point in the country is Morne Diablotins, which has an elevation of . The Commonwealth...
. They are situated where the northeastern Caribbean Sea
Caribbean Sea
The Caribbean Sea is a sea of the Atlantic Ocean located in the tropics of the Western hemisphere. It is bounded by Mexico and Central America to the west and southwest, to the north by the Greater Antilles, and to the east by the Lesser Antilles....
meets the western Atlantic Ocean
Atlantic Ocean
The Atlantic Ocean is the second-largest of the world's oceanic divisions. With a total area of about , it covers approximately 20% of the Earth's surface and about 26% of its water surface area...
. The more southerly part of the Lesser Antilles chain is called the Windward Islands
Windward Islands
The Windward Islands are the southern islands of the Lesser Antilles, within the West Indies.-Name and geography:The Windward Islands are called such because they were more windward to sailing ships arriving in the New World than the Leeward Islands, given that the prevailing trade winds in the...
.

The Leeward Islands fall under a number of national administrations.

There is some active volcanism
Volcanism
Volcanism is the phenomenon connected with volcanoes and volcanic activity. It includes all phenomena resulting from and causing magma within the crust or mantle of a planet to rise through the crust and form volcanic rocks on the surface....
within the islands, with a notable eruption in Montserrat
Montserrat
Montserrat is a British overseas territory located in the Leeward Islands, part of the chain of islands called the Lesser Antilles in the West Indies. This island measures approximately long and wide, giving of coastline...
in the recent past.

Anciently, the islands were inhabited by the Carib people, who gave their name to the Caribbean
Caribbean
The Caribbean is a crescent-shaped group of islands more than 2,000 miles long separating the Gulf of Mexico and the Caribbean Sea, to the west and south, from the Atlantic Ocean, to the east and north...
, and the Taíno people
Taíno people
The Taínos were pre-Columbian inhabitants of the Bahamas, Greater Antilles, and the northern Lesser Antilles. It is thought that the seafaring Taínos are relatives of the Arawak people of South America...
. Some descendants of these groups still survive in the islands.

The islands were amongst the first parts of the Americas to fall under the control of Spanish Empire
Spanish Empire
The Spanish Empire comprised territories and colonies administered directly by Spain in Europe, in America, Africa, Asia and Oceania. It originated during the Age of Exploration and was therefore one of the first global empires. At the time of Habsburgs, Spain reached the peak of its world power....
. European contact commenced with Christopher Columbus' second voyage, and many of the islands' names originate from this period, e.g. Montserrat was named for Santa Maria de Montserrate, after the Blessed Virgin of the Monastery of Montserrat, which is located on the Mountain of Montserrat, the national shrine of Catalonia
Catalonia
Catalonia is an autonomous community in northeastern Spain, with the official status of a "nationality" of Spain. Catalonia comprises four provinces: Barcelona, Girona, Lleida, and Tarragona. Its capital and largest city is Barcelona. Catalonia covers an area of 32,114 km² and has an...
. 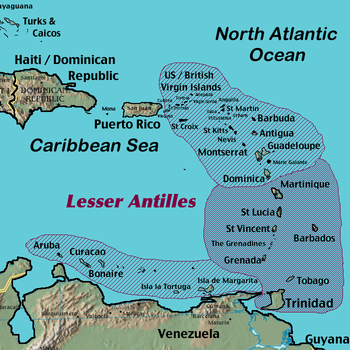 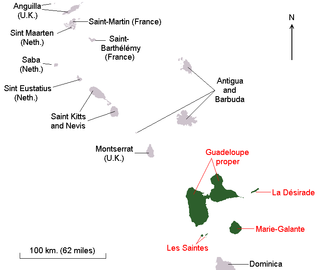 From the northwest to the southeast, the islands are:

The small and remote Isla Aves
Isla Aves
Isla de Aves , or Aves Island, is a Caribbean dependency of Venezuela. It has been the subject of numerous territorial disputes between the neighboring independent islands, such as Dominica, and European mother countries of surrounding dependent islands, such as the Netherlands. It lies to the west...
may perhaps be included with this group for convenience.