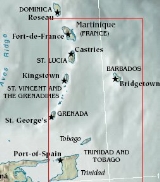 The Windward Islands are called such because they were more windward to sailing ship
Sailing ship
The term sailing ship is now used to refer to any large wind-powered vessel. In technical terms, a ship was a sailing vessel with a specific rig of at least three masts, square rigged on all of them, making the sailing adjective redundant. In popular usage "ship" became associated with all large...
s arriving in the New World
New World
The New World is one of the names used for the Western Hemisphere, specifically America and sometimes Oceania . The term originated in the late 15th century, when America had been recently discovered by European explorers, expanding the geographical horizon of the people of the European middle...
than the Leeward Islands
Leeward Islands
The Leeward Islands are a group of islands in the West Indies. They are the northern islands of the Lesser Antilles chain. As a group they start east of Puerto Rico and reach southward to Dominica. They are situated where the northeastern Caribbean Sea meets the western Atlantic Ocean...
, given that the prevailing trade wind
Trade wind
The trade winds are the prevailing pattern of easterly surface winds found in the tropics, within the lower portion of the Earth's atmosphere, in the lower section of the troposphere near the Earth's equator...
s in the West Indies
British West Indies
The British West Indies was a term used to describe the islands in and around the Caribbean that were part of the British Empire The term was sometimes used to include British Honduras and British Guiana, even though these territories are not geographically part of the Caribbean...
blow east to west. The trans-Atlantic currents and winds that provided the fastest route across the ocean brought these ships to the rough dividing line between the Windward and Leeward islands. Vessels in the Atlantic slave trade
Atlantic slave trade
The Atlantic slave trade, also known as the trans-atlantic slave trade, refers to the trade in slaves that took place across the Atlantic ocean from the sixteenth through to the nineteenth centuries...
departing from the Africa
Africa
Africa is the world's second largest and second most populous continent, after Asia. At about 30.2 million km² including adjacent islands, it covers 6% of the Earth's total surface area and 20.4% of the total land area...
n Gold Coast
Gold Coast (British colony)
The Gold Coast was a British colony on the Gulf of Guinea in west Africa that became the independent nation of Ghana in 1957.-Overview:The first Europeans to arrive at the coast were the Portuguese in 1471. They encountered a variety of African kingdoms, some of which controlled substantial...
and Gulf of Guinea
Gulf of Guinea
The Gulf of Guinea is the northeasternmost part of the tropical Atlantic Ocean between Cape Lopez in Gabon, north and west to Cape Palmas in Liberia. The intersection of the Equator and Prime Meridian is in the gulf....
would first encounter the southeasternmost islands of the Lesser Antilles in their west-northwesterly heading to final destinations in the Caribbean
Caribbean
The Caribbean is a crescent-shaped group of islands more than 2,000 miles long separating the Gulf of Mexico and the Caribbean Sea, to the west and south, from the Atlantic Ocean, to the east and north...
and North
North America
North America is a continent wholly within the Northern Hemisphere and almost wholly within the Western Hemisphere. It is also considered a northern subcontinent of the Americas...
and Central America
Central America
Central America is the central geographic region of the Americas. It is the southernmost, isthmian portion of the North American continent, which connects with South America on the southeast. When considered part of the unified continental model, it is considered a subcontinent...
. The chain of islands form a part of the easternmost boundary of the Caribbean Sea
Caribbean Sea
The Caribbean Sea is a sea of the Atlantic Ocean located in the tropics of the Western hemisphere. It is bounded by Mexico and Central America to the west and southwest, to the north by the Greater Antilles, and to the east by the Lesser Antilles....
.

The Antillean Windward Islands from north to south are:

Barbados
Barbados
Barbados is an island country in the Lesser Antilles. It is in length and as much as in width, amounting to . It is situated in the western area of the North Atlantic and 100 kilometres east of the Windward Islands and the Caribbean Sea; therein, it is about east of the islands of Saint...
, Trinidad and Tobago
Trinidad and Tobago
Trinidad and Tobago officially the Republic of Trinidad and Tobago is an archipelagic state in the southern Caribbean, lying just off the coast of northeastern Venezuela and south of Grenada in the Lesser Antilles...
do not consider themselves part of the Windward Islands but are sometimes included due to proximity and the fact that they are windward relative to other Caribbean isles.

In languages other than English (i.e., Dutch, French, German and Spanish), and also in the local English of some islands, "windward" and "leeward" refer to different groups of islands. In both cases, the east/southeasternmost group are called windward, while the westernmost are called leeward. The group of islands along the Venezuelan coast is called the Leeward Antilles
Leeward Antilles
The Leeward Antilles are a chain of islands in the Caribbean – specifically, the southerly islands of the Lesser Antilles along the southeastern fringe of the Caribbean Sea, just north of the Venezuelan coast of the South American mainland...
in English.