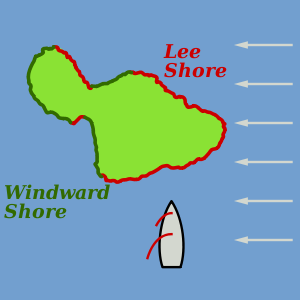 The terms lee shore and windweather or ward shore are nautical
Seamanship
Seamanship is the art of operating a ship or boat.It involves a knowledge of a variety of topics and development of specialised skills including: navigation and international maritime law; weather, meteorology and forecasting; watchstanding; ship-handling and small boat handling; operation of deck...
terms used to describe a stretch of shoreline. A lee shore is one that is to the lee side of a vessel - meaning the wind is blowing towards it. A weather shore has the wind blowing from inland over it out to sea. For example, if you were standing on a beach, looking out to sea with the wind at your back, you are standing on a weather shore. If the wind is blowing at you, you are on a lee shore.

The "lee" of a boat is the side that the wind touches last as it crosses the boat; in the diagram it is left or port side of the boat. The boat in the diagram has a lee shore to its west. In the diagram, the other side of the island, to the far west, has a weather shore. The wind blows over the shore as it heads to sea. This wind, because it blows from east to west, is called an "easterly" wind. This is because the source of a wind is more ascertainable or knowable than its destination, so winds are named for their source.

This is very confusing for landsmen, as the "leeward side" of the boat, and the "lee shore" of the land face opposite directions, as the diagram shows. "Lee" historically means "shelter", but appears to have shifted, in the sole case of shorelines, to describe the shore exposed to the wind. This would make perfect sense to the sailor, standing on the leeward side of his ship, watching it being pushed towards an exposed shoreline by the wind.

A weather shore is potentially treacherous for kitesurfers and windsurfers, who can be blown out to sea if the wind is blowing from the land. For them, a lee shore is safer. For ocean going vessels during a storm, a lee shore is treacherous because the wind slowly forces the boat toward the shore, where it will beach or break up. For this reason Bernard Moitessier
Bernard Moitessier
Bernard Moitessier was a renowned French yachtsman and author of books about his voyages and sailing....
, the great ocean sailor, called the coastline "the great whore"; it attracts sailors during a storm but is in fact highly dangerous. In shallow coastal water maneuver is impaired, waves may become steeper, and objects may be obscured. During a storm navigating, either by chart or by dead reckoning, becomes extremely difficult. A storm surge may make the entrance to a protected body of water prohibitively treacherous or impossible to locate. Heavy weather tactics more often dictate heading out to sea, where deeper water and more room for maneuver allow a sailboat to heave to
Heaving to
In sailing, heaving to is a way of slowing a sail boat's forward progress, as well as fixing the helm and sail positions so that the boat does not actively have to be steered. It is commonly used for a "break"; this may be to wait for the tide before proceeding, to wait out a strong or contrary...
or adopt other defensive measures. In landsmen's parlance, this is called "riding out the storm."


Dangers of a lee shore

Lee shores are dangerous to watercraft because, if left to drift, they will be pushed into shore by the wind, possibly running aground. Sailboat
Sailboat
A sailboat or sailing boat is a boat propelled partly or entirely by sails. The term covers a variety of boats, larger than small vessels such as sailboards and smaller than sailing ships, but distinctions in the size are not strictly defined and what constitutes a sailing ship, sailboat, or a...
s are particularly susceptible to this, as even under sail they are limited to the angle they can travel into the wind; Square rig
Square rig
Square rig is a generic type of sail and rigging arrangement in which the primary driving sails are carried on horizontal spars which are perpendicular, or square, to the keel of the vessel and to the masts. These spars are called yards and their tips, beyond the last stay, are called the yardarms...
ged craft, for instance, can point only slightly to windward. It is possible for a sailing vessel to become trapped along a lee shore, with the only recourse being to use an engine, or use anchor
Anchor
An anchor is a device, normally made of metal, that is used to connect a vessel to the bed of a body of water to prevent the vessel from drifting due to wind or current. The word derives from Latin ancora, which itself comes from the Greek ἄγκυρα .Anchors can either be temporary or permanent...
s to kedge out. Because of this, it is always preferable to travel along a windward shore, especially in inclement weather.

The beach of a lee shore in a storm is also at a significantly higher risk due to the undiminished effects of the wind and waves. A windward shore will have significantly lower waves and slower winds, as they will have been slowed by passage over the land. A windward shore is still subject to storm surge
Storm surge
A storm surge is an offshore rise of water associated with a low pressure weather system, typically tropical cyclones and strong extratropical cyclones. Storm surges are caused primarily by high winds pushing on the ocean's surface. The wind causes the water to pile up higher than the ordinary sea...
.

"Let me only say that it fared with him as with the storm-tossed ship, that miserably drives along the leeward land. The port would fain give succor; the port is pitiful; in the port is safety, comfort, hearthstone, supper, warm blankets, friends, all that's kind to our mortalities. But in that gale, the port, the land, is that ship's direst jeopardy; she must fly all hospitality; one touch of land, though it but graze the keel, would make her shudder through and through. With all her might she crowds all sail off shore; in so doing, fights 'gainst the very winds that fain would blow her homeward; seeks all the lashed sea's landslessness again; for refuge's sake forlornly rushing into peril; her only friend her bitterest foe!

"Know ye, now, Bulkington? Glimpses do you seem to see of that mortally intolerable truth; that all deep, earnest thinking is but the intrepid effort of the soul to keep the open independence of her sea; while the wildest winds of heaven and earth conspire to cast her on the treacherous, slavish shore?

"But as in landlessness alone resides the highest truth, shoreless, indefinite as God -- so, better is it to perish in that howling infinite, than be ingloriously dashed upon the lee, even if that were safety! For worm-like, then, oh! who would craven crawl to land! Terrors of the terrible! is all this agony so vain? Take heart, take heart, O Bulkington! Bear thee grimly, demigod! Up from the spray of thy ocean-perishing -- straight up, leaps thy apotheosis!" (Chapter 23, "The Lee Shore")

Crosby, Stills and Nash wrote and recorded a song "The Lee Shore". This was recorded at Stephen Stills' house, in Laurel Canyon, Los Angeles on December 28, 1969, and originally released on the album Four Way Street, on April 17, 1971.
The source of this article is wikipedia, the free encyclopedia.  The text of this article is licensed under the GFDL.