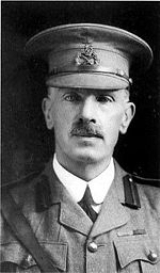 Major General
Major General (Australia)
Major General is a senior rank of the Australian Army, and was created as a direct equivalent of the British military rank of Major General. It is the third-highest active rank of the Australian Army, and is considered to be equivalent to a two-star rank...
Sir William Throsby Bridges KCB
Order of the Bath
The Most Honourable Order of the Bath is a British order of chivalry founded by George I on 18 May 1725. The name derives from the elaborate mediæval ceremony for creating a knight, which involved bathing as one of its elements. The knights so created were known as Knights of the Bath...
, CMG (18 February 1861 – 18 May 1915) served with Australia
Australia
Australia , officially the Commonwealth of Australia, is a country in the Southern Hemisphere comprising the mainland of the Australian continent, the island of Tasmania, and numerous smaller islands in the Indian and Pacific Oceans. It is the world's sixth-largest country by total area...
n forces during World War I
World War I
World War I , which was predominantly called the World War or the Great War from its occurrence until 1939, and the First World War or World War I thereafter, was a major war centred in Europe that began on 28 July 1914 and lasted until 11 November 1918...
, and was the first Australian to reach general officer rank. He died at Gallipoli
Battle of Gallipoli
The Gallipoli Campaign, also known as the Dardanelles Campaign or the Battle of Gallipoli, took place at the peninsula of Gallipoli in the Ottoman Empire between 25 April 1915 and 9 January 1916, during the First World War...
on 18 May 1915, becoming the first Australian general to be killed during the war.

In 1886, he received a commission into the New South Wales Permanent Artillery stationed at Middle Head. In 1890 he was then sent for training to the United Kingdom
United Kingdom
The United Kingdom of Great Britain and Northern IrelandIn the United Kingdom and Dependencies, other languages have been officially recognised as legitimate autochthonous languages under the European Charter for Regional or Minority Languages...
at the Royal Military Academy, Woolwich and at the Royal School of Gunnery at Shoeburyness. Upon returning to Australia in 1893 he became Chief Instructor at the Middle Head School of Gunnery. He volunteered for service in the British Army
British Army
The British Army is the land warfare branch of Her Majesty's Armed Forces in the United Kingdom. It came into being with the unification of the Kingdom of England and Scotland into the Kingdom of Great Britain in 1707. The new British Army incorporated Regiments that had already existed in England...
in the Second Boer War
Second Boer War
The Second Boer War was fought from 11 October 1899 until 31 May 1902 between the British Empire and the Afrikaans-speaking Dutch settlers of two independent Boer republics, the South African Republic and the Orange Free State...
of 1899–1902, from where he contracted typhoid. After being evacuated to England, he returned to Australia in September 1900, from where rapid promotions followed: Assistant Quartermaster General of the Army HQ in Melbourne; Chief of Military Intelligence; Chief of the Australian General Staff. In 1909 he went to England as Australia's representative on the Imperial General Staff.

In 1910 Bridges was promoted to Brigadier General
Brigadier General
Brigadier general is a senior rank in the armed forces. It is the lowest ranking general officer in some countries, usually sitting between the ranks of colonel and major general. When appointed to a field command, a brigadier general is typically in command of a brigade consisting of around 4,000...
and (on the recommendation of Lord Kitchener) was recalled to Australia to become the first Commandant of the Royal Military College
Royal Military College, Duntroon
The Royal Military College, Duntroon is the Australian Army's officer training establishment. It was founded at Duntroon, in the Australian Capital Territory, in 1911 and is situated on picturesque grounds at the foot of Mount Pleasant near Lake Burley Griffin, close to the Department of Defence...
at Duntroon
Duntroon, Australian Capital Territory
Duntroon is a suburb of the city of Canberra in the Australian Capital Territory.-History:Robert Campbell's property Duntroon was situated on the limestone plains of New South Wales in the area that is now covered by the ACT....
. He chose the site of the old Campbell homestead. In line with the recommendations of Lord Kitchener, Bridges largely modelled Duntroon on the United States Military Academy at West Point
United States Military Academy
The United States Military Academy at West Point is a four-year coeducational federal service academy located at West Point, New York. The academy sits on scenic high ground overlooking the Hudson River, north of New York City...
.

In May 1914, Bridges was appointed Inspector General
Inspector General
An Inspector General is an investigative official in a civil or military organization. The plural of the term is Inspectors General.-Bangladesh:...
of the Army. He was in Queensland
Queensland
Queensland is a state of Australia, occupying the north-eastern section of the mainland continent. It is bordered by the Northern Territory, South Australia and New South Wales to the west, south-west and south respectively. To the east, Queensland is bordered by the Coral Sea and Pacific Ocean...
when the war began, and arrived in Melbourne
Melbourne
Melbourne is the capital and most populous city in the state of Victoria, and the second most populous city in Australia. The Melbourne City Centre is the hub of the greater metropolitan area and the Census statistical division—of which "Melbourne" is the common name. As of June 2009, the greater...
on 5 August 1914. Bridges met with the cabinet and was charged with the creation of an expeditionary force of 20,000 men for overseas service. He chose much of his staff from available graduates from the Duntroon college.

Bridges and his command sailed from Albany
Albany, Western Australia
Albany is a port city in the Great Southern region of Western Australia, some 418 km SE of Perth, the state capital. As of 2009, Albany's population was estimated at 33,600, making it the 6th-largest city in the state....
, Western Australia
Western Australia
Western Australia is a state of Australia, occupying the entire western third of the Australian continent. It is bounded by the Indian Ocean to the north and west, the Great Australian Bight and Indian Ocean to the south, the Northern Territory to the north-east and South Australia to the south-east...
, on 26 October 1914. En route, the destination was changed from England to Egypt
Egypt
Egypt , officially the Arab Republic of Egypt, Arabic: , is a country mainly in North Africa, with the Sinai Peninsula forming a land bridge in Southwest Asia. Egypt is thus a transcontinental country, and a major power in Africa, the Mediterranean Basin, the Middle East and the Muslim world...
and Bridges arrived there on 30 November 1914. As commander of the 1st Australian Division
1st Division (Australia)
The 1st Division is the main formation of the Australian Army and contains the majority of the army's regular forces. Its headquarters is in Enoggera, a suburb of Brisbane...
, Bridges landed at Anzac Cove
Landing at Anzac Cove
The landing at Anzac Cove was part of the amphibious invasion of the Gallipoli Peninsula by Australian and New Zealand forces on 25 April 1915. The landing, north of Gaba Tepe on the Aegean coast of the Peninsula, was made by soldiers of the Australian and New Zealand Army Corps and was the first...
, Gallipoli at around 7:30am on 25 April 1915.

While touring the lines on 15 May 1915, Bridges was shot through the femoral artery
Femoral artery
The femoral artery is a general term comprising a few large arteries in the thigh. They begin at the inguinal ligament and end just above the knee at adductor canal or Hunter's canal traversing the extent of the femur bone....
by a Turkish
Turkey
Turkey , known officially as the Republic of Turkey , is a Eurasian country located in Western Asia and in East Thrace in Southeastern Europe...
sniper. Dragged to safety, he was evacuated to the hospital ship Gascon. Infection set in but amputation was deemed impossible since he had lost so much blood.

Made aware of Bridges' imminent death, King George V
George V of the United Kingdom
George V was King of the United Kingdom and the British Dominions, and Emperor of India, from 6 May 1910 through the First World War until his death in 1936....
knight
Knight
A knight was a member of a class of lower nobility in the High Middle Ages.By the Late Middle Ages, the rank had become associated with the ideals of chivalry, a code of conduct for the perfect courtly Christian warrior....
ed him on 17 May. He died the following day on board the hospital ship.

His body was returned to Melbourne
Melbourne
Melbourne is the capital and most populous city in the state of Victoria, and the second most populous city in Australia. The Melbourne City Centre is the hub of the greater metropolitan area and the Census statistical division—of which "Melbourne" is the common name. As of June 2009, the greater...
where he received a state funeral
State funeral
A state funeral is a public funeral ceremony, observing the strict rules of protocol, held to honor heads of state or other important people of national significance. State funerals usually include much pomp and ceremony as well as religious overtones and distinctive elements of military tradition...
. He was buried on 3 September 1915 at Duntroon
Duntroon, Australian Capital Territory
Duntroon is a suburb of the city of Canberra in the Australian Capital Territory.-History:Robert Campbell's property Duntroon was situated on the limestone plains of New South Wales in the area that is now covered by the ACT....
on the slopes of Mount Pleasant
Mount Pleasant (Australian Capital Territory)
Mount Pleasant in Canberra overlooks the Australian Defence Force Academy and Royal Military College at Duntroon, Australia.On the top of the hill is a memorial to all ranks of the Royal Regiment of Australian Artillery....
. The grave was designed by Walter Burley Griffin
Walter Burley Griffin
Walter Burley Griffin was an American architect and landscape architect, who is best known for his role in designing Canberra, Australia's capital city...
, the designer of Canberra. A bridge at the Majura Training Area was unofficially named General Grave's Bridge (A play on General Bridge's Grave).

As an ex-cadet, his name is listed on the Memorial Arch at the Royal Military College of Canada
Royal Military College of Canada
The Royal Military College of Canada, RMC, or RMCC , is the military academy of the Canadian Forces, and is a degree-granting university. RMC was established in 1876. RMC is the only federal institution in Canada with degree granting powers...
in Kingston, Ontario
Kingston, Ontario
Kingston, Ontario is a Canadian city located in Eastern Ontario where the St. Lawrence River flows out of Lake Ontario. Originally a First Nations settlement called "Katarowki," , growing European exploration in the 17th Century made it an important trading post...
. He is commemorated on the Canadian Virtual War Memorial and on page 566 of the Canadian First World War Book of Remembrance.

He was survived by "Sandy", the only (Australian) Waler horse
Waler horse
The Waler is an Australian breed of riding horses that developed from the horses that were brought to the Australian colonies in the 19th century...
to return from World War I (due to quarantine restrictions). It is not clear when Bridges met Sandy but after his death Sandy was cared for by a number of Army vets until, by order of the Minister of Defence, Sandy was returned to Australia where he lived at the Remount Depot at Maribyrnong.

On 17 May 1915, Bridges was appointed a Knight Commander of the Order of the Bath. The award was not formally gazetted until 22 May.