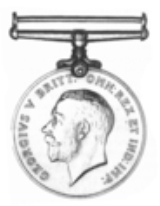 Encyclopedia
The British War Medal was a campaign medal of the British Empire
British Empire
The British Empire comprised the dominions, colonies, protectorates, mandates and other territories ruled or administered by the United Kingdom. It originated with the overseas colonies and trading posts established by England in the late 16th and early 17th centuries. At its height, it was the...
, for service in World War I
World War I
World War I , which was predominantly called the World War or the Great War from its occurrence until 1939, and the First World War or World War I thereafter, was a major war centred in Europe that began on 28 July 1914 and lasted until 11 November 1918...
.

The medal was approved in 1919, for issue to officers and men of British and Imperial forces who had rendered service between 5 August 1914 and 11 November 1918. Officers and men of the Royal Navy
Royal Navy
The Royal Navy is the naval warfare service branch of the British Armed Forces. Founded in the 16th century, it is the oldest service branch and is known as the Senior Service...
, Royal Marines
Royal Marines
The Corps of Her Majesty's Royal Marines, commonly just referred to as the Royal Marines , are the marine corps and amphibious infantry of the United Kingdom and, along with the Royal Navy and Royal Fleet Auxiliary, form the Naval Service...
, and Dominion and Colonial naval forces (including reserves) were required to have completed 28 days mobilised service – the medal was automatically awarded in the event of death on active service before the completion of this period.

The medal was later extended to cover the period 1919–20 and service in mine-clearing at sea as well as participation in operations in North and South Russia, the eastern Baltic, Siberia, the Black Sea, and the Caspian.