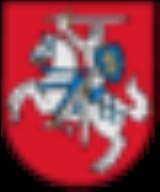 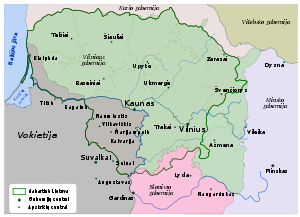 The Vilna Governorate or Government of Vilna was a governorate (guberniya
Guberniya
A guberniya was a major administrative subdivision of the Russian Empire usually translated as government, governorate, or province. Such administrative division was preserved for sometime upon the collapse of the empire in 1917. A guberniya was ruled by a governor , a word borrowed from Latin ,...
) of the Russian Empire
Russian Empire
The Russian Empire was a state that existed from 1721 until the Russian Revolution of 1917. It was the successor to the Tsardom of Russia and the predecessor of the Soviet Union...
created after the Third Partition of the Polish-Lithuanian Commonwealth
Polish-Lithuanian Commonwealth
The Polish–Lithuanian Commonwealth was a dualistic state of Poland and Lithuania ruled by a common monarch. It was the largest and one of the most populous countries of 16th- and 17th‑century Europe with some and a multi-ethnic population of 11 million at its peak in the early 17th century...
in 1795. It was part of the Lithuanian General Governorate, which was called the Vilnius General Governorate after 1830, and was attached to the Northwestern Krai
Northwestern Krai
Northwestern Krai was a subdivision of Imperial Russia in the territories of the present day Belarus and Lithuania. Together with the Southwestern Krai it formed the Western Krai...
. The seat was in Vilna (Vilnius
Vilnius
Vilnius is the capital of Lithuania, and its largest city, with a population of 560,190 as of 2010. It is the seat of the Vilnius city municipality and of the Vilnius district municipality. It is also the capital of Vilnius County...
) where the Governors General resided.

The first governorates, Vilna Governorate (consisting of eleven uyezd
Uyezd
Uyezd or uezd was an administrative subdivision of Rus', Muscovy, Russian Empire, and the early Russian SFSR which was in use from the 13th century. Uyezds for most of the history in Russia were a secondary-level of administrative division...
s or districts) and Slonim Governorate, were established after the third partition of the Polish-Lithuanian Commonwealth
Partitions of Poland
The Partitions of Poland or Partitions of the Polish–Lithuanian Commonwealth took place in the second half of the 18th century and ended the existence of the Polish–Lithuanian Commonwealth, resulting in the elimination of sovereign Poland for 123 years...
. Just a year later, on December 12, 1796, by order of Tsar Paul I
Paul I of Russia
Paul I was the Emperor of Russia between 1796 and 1801. He also was the 72nd Prince and Grand Master of the Order of Malta .-Childhood:...
they were merged into one governorate, called Lithuania Governorate
Lithuania Governorate
The Lithuania Governorate was a short-lived governorate of the Russian Empire. After the third partition of the Polish-Lithuanian Commonwealth in 1795, the former territories of the Grand Duchy of Lithuania were divided between the Vilna Governorate and the Slonim Governorate by Catherine II of...
, with its capital in Vilnius. By order of Tsar Alexander I
Alexander I of Russia
Alexander I of Russia , served as Emperor of Russia from 23 March 1801 to 1 December 1825 and the first Russian King of Poland from 1815 to 1825. He was also the first Russian Grand Duke of Finland and Lithuania....
on September 9, 1801 Lithuania Governorate was split into the Lithuania-Vilna Governorate and the Lithuania-Grodno Governorate. After thirty nine years, the word "Lithuania" was dropped from the two names by Nicholas I
Nicholas I of Russia
Nicholas I , was the Emperor of Russia from 1825 until 1855, known as one of the most reactionary of the Russian monarchs. On the eve of his death, the Russian Empire reached its historical zenith spanning over 20 million square kilometers...
. In 1843 another administrative reform took place, creating Kovno Governorate
Kovno Governorate
The Kovno Governorate or Government of Kovno was a governorate of the Russian Empire. Its capital was Kovno . It was formed on 18 December 1842 by tsar Nicholas I from the western part of the Vilna Governorate, and the order was carried out on 1 July 1843. It used to be a part of Northwestern Krai...
out of seven western districts of the Vilna Governorate, including all of Samogitia
Samogitia
Samogitia is one of the five ethnographic regions of Lithuania. It is located in northwestern Lithuania. Its largest city is Šiauliai/Šiaulē. The region has a long and distinct cultural history, reflected in the existence of the Samogitian dialect...
. Vilna Governorate received three additional districts: Vileyka
Vileyka
Vileyka – town in Republic of Belarus, the capital of the Vileyka Raion in the Minsk Voblast. It is located on the river Viliya, 100 km to northwest from Minsk. First documental record: 16 November 1460....
and Dzisna
Dzisna
Dzisna , is a town in the Vitsebsk Voblast of Belarus. It's located on the left bank of the Daugava River, near the confluence of Dysna. It has 2,700 inhabitants . The towns population has declined over the years; early in the 20th century it had close to 10,000 inhabitants....
from Minsk Governorate
Minsk Governorate
The Minsk Governorate or Government of Minsk was a governorate of the Russian Empire. The seat was in Minsk. It was created in 1793 from the land acquired in the partitions of Poland, and lasted until 1921.- Administrative structure :...
and Lida
Lida
Lida is a city in western Belarus in Hrodna Voblast, situated 160 km west of Minsk. It is the fourteenth largest city in Belarus.- Etymology :...
from Grodno Governorate
Grodno Governorate
The Grodno Governorate, was a governorate of the Russian Empire.-Overview:Grodno: a western province or government of Europe lying between 52 and 54 N lat 23 and E long and bounded N by Vilna E by Minsk S Volhynia and W by the former kingdom of Poland The country was a wide plain in parts very...
. This arrangement remained unchanged until World War I
World War I
World War I , which was predominantly called the World War or the Great War from its occurrence until 1939, and the First World War or World War I thereafter, was a major war centred in Europe that began on 28 July 1914 and lasted until 11 November 1918...
. A part of it was then included in the Lithuania District
Lithuania District
Lithuania District was an administrative division of German-controlled territory of Ober-Ost during World War I. It was bordered by the Bialystok-Grodno District to the south and the Courland District to the north.-History:...
of Ober-Ost, formed by the occupying German Empire
German Empire
The German Empire refers to Germany during the "Second Reich" period from the unification of Germany and proclamation of Wilhelm I as German Emperor on 18 January 1871, to 1918, when it became a federal republic after defeat in World War I and the abdication of the Emperor, Wilhelm II.The German...
.

During the Polish-Soviet War
Polish-Soviet War
The Polish–Soviet War was an armed conflict between Soviet Russia and Soviet Ukraine and the Second Polish Republic and the Ukrainian People's Republic—four states in post–World War I Europe...
the area was annexed by Poland, and in 1923 the Wilno Voivodeship was founded here, which existed until 1939.