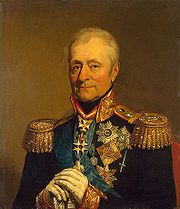 Levin August Gottlieb Theophil , Count von Bennigsen (10 February 1745 in Braunschweig
Braunschweig
Braunschweig , is a city of 247,400 people, located in the federal-state of Lower Saxony, Germany. It is located north of the Harz mountains at the farthest navigable point of the Oker river, which connects to the North Sea via the rivers Aller and Weser....
– 3 December 1826 in Banteln
Banteln
Banteln is a town in the district of Hildesheim in Lower Saxony, Germany....
) was a German
Germany
Germany , officially the Federal Republic of Germany , is a federal parliamentary republic in Europe. The country consists of 16 states while the capital and largest city is Berlin. Germany covers an area of 357,021 km2 and has a largely temperate seasonal climate...
general
General
A general officer is an officer of high military rank, usually in the army, and in some nations, the air force. The term is widely used by many nations of the world, and when a country uses a different term, there is an equivalent title given....
in the service of the Russian Empire
Russian Empire
The Russian Empire was a state that existed from 1721 until the Russian Revolution of 1917. It was the successor to the Tsardom of Russia and the predecessor of the Soviet Union...
.

He was born into a Hanoverian
Electorate of Hanover
The Electorate of Brunswick-Lüneburg was the ninth Electorate of the Holy Roman Empire of the German Nation...
family in Brunswick
Braunschweig
Braunschweig , is a city of 247,400 people, located in the federal-state of Lower Saxony, Germany. It is located north of the Harz mountains at the farthest navigable point of the Oker river, which connects to the North Sea via the rivers Aller and Weser....
and served successively as a page at the Hanoverian court and as an officer of foot-guards where he participated in the Seven Years' War
Seven Years' War
The Seven Years' War was a global military war between 1756 and 1763, involving most of the great powers of the time and affecting Europe, North America, Central America, the West African coast, India, and the Philippines...
. In 1764, he retired from the Hanoverian army and entered the Russian service as a field officer in the Vyatka musketeer regiment in 1773. He fought against the Turks in 1774 and in 1778, becoming lieutenant-colonel in the latter year. In 1787 his conduct at the storming of Ochakov won him promotion to the rank of brigadier
Brigadier
Brigadier is a senior military rank, the meaning of which is somewhat different in different military services. The brigadier rank is generally superior to the rank of colonel, and subordinate to major general....
, and he distinguished himself repeatedly in smashing the Kościuszko Uprising
Kosciuszko Uprising
The Kościuszko Uprising was an uprising against Imperial Russia and the Kingdom of Prussia led by Tadeusz Kościuszko in Poland, Belarus and Lithuania in 1794...
and in the Persian War of 1796. In 1794 he was awarded the Order of St. George
Order of St. George
The Military Order of the Holy Great-Martyr and the Triumphant George The Military Order of the Holy Great-Martyr and the Triumphant George The Military Order of the Holy Great-Martyr and the Triumphant George (also known as Order of St. George the Triumphant, Russian: Военный орден Св...
of the Third Degree and an estate in Minsk
Minsk
- Ecological situation :The ecological situation is monitored by Republican Center of Radioactive and Environmental Control .During 2003–2008 the overall weight of contaminants increased from 186,000 to 247,400 tons. The change of gas as industrial fuel to mazut for financial reasons has worsened...
guberniya
Guberniya
A guberniya was a major administrative subdivision of the Russian Empire usually translated as government, governorate, or province. Such administrative division was preserved for sometime upon the collapse of the empire in 1917. A guberniya was ruled by a governor , a word borrowed from Latin ,...
and promoted to Major General for his accomplishments in the former campaign.

In 1798 he was fired from military service by the Tsar
Tsar
Tsar is a title used to designate certain European Slavic monarchs or supreme rulers. As a system of government in the Tsardom of Russia and Russian Empire, it is known as Tsarist autocracy, or Tsarism...
Paul I
Paul I of Russia
Paul I was the Emperor of Russia between 1796 and 1801. He also was the 72nd Prince and Grand Master of the Order of Malta .-Childhood:...
allegedly because of his connections with Platon Zubov
Platon Zubov
Prince Platon Alexandrovich Zubov was the last of Catherine the Great's favourites and the most powerful man in Russian Empire during the last years of her reign....
. It is known that he took an active part in the planning phase of the conspiracy to assassinate Paul I, but his role in the actual killing remains a matter of conjecture. Tsar Alexander I
Alexander I of Russia
Alexander I of Russia , served as Emperor of Russia from 23 March 1801 to 1 December 1825 and the first Russian King of Poland from 1815 to 1825. He was also the first Russian Grand Duke of Finland and Lithuania....
made him governor-general of Lithuania
Vilna Governorate
The Vilna Governorate or Government of Vilna was a governorate of the Russian Empire created after the Third Partition of the Polish-Lithuanian Commonwealth in 1795...
in 1801, and in 1802 a general of cavalry.

In 1806 he was in command of one of the Russian armies operating against Napoleon, when he fought the battle of Pultusk
Battle of Pultusk
The Battle of Pułtusk took place on 26 December 1806 during the War of the Fourth Coalition near Pułtusk, Poland. Approximately 35,000 Russian soldiers with 128 guns under General Levin August, Count von Bennigsen resisted the attacks of 25,000 First French Empire soldiers under Marshal Jean...
and met the emperor in person in the sanguinary battle of Eylau
Battle of Eylau
The Battle of Eylau or Battle of Preussisch-Eylau, 7 and 8 February 1807, was a bloody and inconclusive battle between Napoléon's Grande Armée and a Russian Empire army under Levin August, Count von Bennigsen near the town of Preußisch Eylau in East Prussia. Late in the battle, the Russians...
(8 February 1807). In the battle of Pultusk he resisted French troops under Jean Lannes
Jean Lannes
Jean Lannes, 1st Duc de Montebello, was a Marshal of France. He was one of Napoleon's most daring and talented generals. Napoleon once commented on Lannes: "I found him a pygmy and left him a giant"...
before retreating. This brought him the Order of St. George of the Second Degree while after the battle of Eylau he was awarded Order of St. Andrew
Order of St. Andrew
The Order of St. Andrew the First-Called is the first and the highest order of chivalry of the Russian Empire.- Russian Empire :The Order was established in 1698 by Tsar Peter the Great, in honour of Saint Andrew, the first apostle of Jesus and patron saint of Russia...
- the highest order in the Russian empire. Here he could claim to have inflicted the first reverse suffered by Napoleon, but six months later Bennigsen met with the crushing defeat of Friedland
Battle of Friedland
The Battle of Friedland saw Napoleon I's French army decisively defeat Count von Bennigsen's Russian army about twenty-seven miles southeast of Königsberg...
(14 June 1807) the direct consequence of which was the treaty of Tilsit.

Bennigsen was heavily criticised for the battle of Friedland and for the decline of discipline in the army and now retired for some years, but in the campaign of 1812 he reappeared in the army in various responsible positions. He was present at Borodino
Battle of Borodino
The Battle of Borodino , fought on September 7, 1812, was the largest and bloodiest single-day action of the French invasion of Russia and all Napoleonic Wars, involving more than 250,000 troops and resulting in at least 70,000 casualties...
, and defeated Murat
Joachim Murat
Joachim-Napoléon Murat , Marshal of France and Grand Admiral or Admiral of France, 1st Prince Murat, was Grand Duke of Berg from 1806 to 1808 and then King of Naples from 1808 to 1815...
in the engagement of Tarutino
Battle of Tarutino
The Battle of Tarutino was a part of Napoleon's invasion of Russia. The battle is sometimes called the Battle of Vinkovo or the Battle of Chernishnya after the local river. Many historians claim that the latter name is more fitting because the village of Tarutino was 8 km from the described events...
where he himself was wounded in the leg, but on account of a quarrel with Marshal Kutusov, the Russian commander-in-chief, he was compelled to retire from active military employment.

After the death of Kutusov he was recalled and placed at the head of an army. Bennigsen participated in the battles of Bautzen
Battle of Bautzen
In the Battle of Bautzen a combined Russian/Prussian army was pushed back by Napoleon, but escaped destruction, some sources claim, because Michel Ney failed to block their retreat...
and Lützen
Battle of Lützen (1813)
In the Battle of Lützen , Napoleon I of France lured a combined Prussian and Russian force into a trap, halting the advances of the Sixth Coalition after his devastating losses in Russia. The Russian commander, Prince Peter Wittgenstein, attempting to undo Napoleon's capture of Leipzig, attacked...
, leading one of the columns that made the decisive attack on the last day of the battle of Leipzig
Battle of Leipzig
The Battle of Leipzig or Battle of the Nations, on 16–19 October 1813, was fought by the coalition armies of Russia, Prussia, Austria and Sweden against the French army of Napoleon. Napoleon's army also contained Polish and Italian troops as well as Germans from the Confederation of the Rhine...
(16-19 October 1813). On the same evening he was made a count by the emperor Alexander I, and he afterwards commanded the forces which operated against Marshal Davout
Louis Nicolas Davout
Louis-Nicolas d'Avout , better known as Davout, 1st Duke of Auerstaedt, 1st Prince of Eckmühl, was a Marshal of France during the Napoleonic Era. His prodigious talent for war along with his reputation as a stern disciplinarian, earned him the title "The Iron Marshal"...
in North Germany, most notably in the year-long Siege of Hamburg
Siege of Hamburg
The city of Hamburg was one of the most powerful fortresses east of the Rhine. After being freed from Napoleonic rule by advancing Cossacks and other following allied troops it was once more occupied by Marshal Davout's French XIII Corps on 28 May 1813, at the height of the campaign for Germany in...
(1813-14). After the peace treaty of Fontainebleau
Treaty of Fontainebleau (1814)
The Treaty of Fontainebleau was an agreement established in Fontainebleau on 11 April 1814 between Napoleon Bonaparte and representatives from Austria, Hungary and Bohemia , as well as Russia and Prussia. The treaty was signed at Paris on 11 April by the plenipotentiaries of both sides, and...
he was awarded the St. George order of the First Degree - the highest Russian military order - for his actions in the Napoleonic wars in general.

After the general peace he held a command from 1815 to 1818, when he retired from active service and settled on his Hanoverian estate of Banteln near Hildesheim
Hildesheim
Hildesheim is a city in Lower Saxony, Germany. It is located in the district of Hildesheim, about 30 km southeast of Hanover on the banks of the Innerste river, which is a small tributary of the Leine river...
. By the end of his life he completely lost his sight. He died, aged 81. His son, Alexander Levin, Count von Bennigsen (1809-1893) was a distinguished Hanoverian statesman.