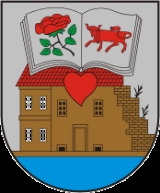 Encyclopedia
Ukmergė were a faction of the Marxist Russian Social Democratic Labour Party which split apart from the Menshevik faction at the Second Party Congress in 1903....
forces occupied the city during the Lithuanian–Soviet War
Lithuanian–Soviet War
The Lithuanian–Soviet War or Lithuanian–Bolshevik War was fought between newly independent Lithuania and the Russian Soviet Federated Socialist Republic in the aftermath of World War I. It was part of the larger Soviet westward offensive of 1918–1919...
, but it was soon liberated by the Lithuanian army led by Jonas Variakojis
Jonas Variakojis
Jonas Variakojis was a Lithuanian army officer....
. Over five hundred Bolshevik prisoners were taken during the Battle of Ukmergė. An iron foundry was established in the same year. In 1920, the Lithuanian army stopped Polish
Poland
Poland , officially the Republic of Poland , is a country in Central Europe bordered by Germany to the west; the Czech Republic and Slovakia to the south; Ukraine, Belarus and Lithuania to the east; and the Baltic Sea and Kaliningrad Oblast, a Russian exclave, to the north...
incursions into the rest of the country, after a series of battles that were waged to establish borders between the two newly re-established countries. An electric plant, a printing house and 120 other small businesses were opened. The city had five newspapers until 1939. In 1930 a monument named Lituania Restituta was erected to commemorate the first decade of restored Lithuanian independence. A Polish high school also operated in Ukmergė during the interbellum. 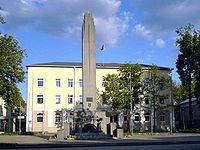 In 1940, after the Soviet occupation of Lithuania, deportations of people from the town began. When the Germans
Nazi Germany
Nazi Germany , also known as the Third Reich , but officially called German Reich from 1933 to 1943 and Greater German Reich from 26 June 1943 onward, is the name commonly used to refer to the state of Germany from 1933 to 1945, when it was a totalitarian dictatorship ruled by...
attacked the Soviet Union and its occupied territories, on June 22, 1941, the retreating Soviets gave instructions to their operatives to kill some one hundred and twenty prisoners; however, most of them escaped - only eight of them were tortured to death. After the German invasion, the Nazis rounded up and killed about 10,000 members of the town's Jewish population. During World War II, the city center suffered from extensive bomb damage. For years after the return of the Soviets, the city's people organized and participated in resistance movement
Resistance movement
A resistance movement is a group or collection of individual groups, dedicated to opposing an invader in an occupied country or the government of a sovereign state. It may seek to achieve its objects through either the use of nonviolent resistance or the use of armed force...
s. The deportation
Deportation
Deportation means the expulsion of a person or group of people from a place or country. Today it often refers to the expulsion of foreign nationals whereas the expulsion of nationals is called banishment, exile, or penal transportation...
of the city's population to Siberia
Siberia
Siberia is an extensive region constituting almost all of Northern Asia. Comprising the central and eastern portion of the Russian Federation, it was part of the Soviet Union from its beginning, as its predecessor states, the Tsardom of Russia and the Russian Empire, conquered it during the 16th...
continued. In 1950 the monument to Lithuania's Independence was destroyed. The city reconstructed it in 1990, even before the restoration of Lithuania's independence was declared. Around 1964, two coupled Soviet SS-4 or R-12 Dvina nuclear missile bases were built in the woods near Ukmergė under Nikita Khrushchev
Nikita Khrushchev
Nikita Sergeyevich Khrushchev led the Soviet Union during part of the Cold War. He served as First Secretary of the Communist Party of the Soviet Union from 1953 to 1964, and as Chairman of the Council of Ministers, or Premier, from 1958 to 1964...
. Each had four surface launch pads, semi-underground hangar
Hangar
A hangar is a closed structure to hold aircraft or spacecraft in protective storage. Most hangars are built of metal, but other materials such as wood and concrete are also sometimes used...
s to store the missiles and several accessory buildings. The bases were mentioned in the 1987 Intermediate-Range Nuclear Forces Treaty
Intermediate-Range Nuclear Forces Treaty
The Intermediate-Range Nuclear Forces Treaty is a 1987 agreement between the United States and the Soviet Union. Signed in Washington, D.C. by U.S. President Ronald Reagan and General Secretary Mikhail Gorbachev on December 8, 1987, it was ratified by the United States Senate on May 27, 1988 and...
between the United States and the Soviet Union. They both are in ruined state at present and freely accessible to public.


Etymology of the name

The city has taken its original name Vilkmergė from the Vilkmergėlė River which was initially called Vilkmergė and assumed a diminutive form after the growth of the settlement. It is commonly thought that the name may be translated as "she-wolf", from the combination of Vilkas (wolf) and Merga (maiden). More likely the second root of the dual-stemmed name is verbal merg-/merk- meaning "to submerge" or "to dip". According to local legend, Vilkmergė was a girl raised by wolves, who bridged the divide between animals and humans, in the same way as Rudyard Kipling
Rudyard Kipling
Joseph Rudyard Kipling was an English poet, short-story writer, and novelist chiefly remembered for his celebration of British imperialism, tales and poems of British soldiers in India, and his tales for children. Kipling received the 1907 Nobel Prize for Literature...
's Mowgli
Mowgli
Mowgli is a fictional character from India who originally appeared in Rudyard Kipling's short story "In the Rukh" and then went on to become the most prominent and memorable character in his fantasies, The Jungle Book and The Second Jungle Book , which also featured stories about other...
. The folk etymology of "Ukmergė", by contrast, is "farm girl" (Lith. ūkis = farm). The original name has been adopted by the local soccer team, "Vilkmergė Ukmergė" as well as popular HBH Vilkmergė beer.