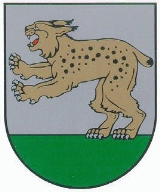 Encyclopedia
Raseiniai is a city in Lithuania
Lithuania
Lithuania , officially the Republic of Lithuania is a country in Northern Europe, the biggest of the three Baltic states. It is situated along the southeastern shore of the Baltic Sea, whereby to the west lie Sweden and Denmark...
. It is located on the south eastern foothills of the Samogitia
Samogitia
Samogitia is one of the five ethnographic regions of Lithuania. It is located in northwestern Lithuania. Its largest city is Šiauliai/Šiaulē. The region has a long and distinct cultural history, reflected in the existence of the Samogitian dialect...
ns highland, some 5 km (3.1 mi) north from the Kaunas–Klaipėda highway
A1 highway (Lithuania)
The A1 Highway is a highway in Lithuania . It connects the capital city of Vilnius with the port city of Klaipėda, via the second largest city, Kaunas. Its length is over , making it the longest highway in Lithuania....
.

Raseiniai is one of the oldest communities in Lithuania – the name of the settlement was mentioned for the first time in 1253. Its name was mentioned in Chronicles of the 13th and 14th centuries under various names, including Rushigen, Rossyen, and Rasseyne. In 1253 Grand Duke Mindaugas
Mindaugas
Mindaugas was the first known Grand Duke of Lithuania and the only King of Lithuania. Little is known of his origins, early life, or rise to power; he is mentioned in a 1219 treaty as an elder duke, and in 1236 as the leader of all the Lithuanians...
ceded one part of the Samogitia territory, including some of the district around Raseiniai, to the Livonian Order
Livonian Order
The Livonian Order was an autonomous Livonian branch of the Teutonic Order and a member of the Livonian Confederation from 1435–1561. After being defeated by Samogitians in the 1236 Battle of Schaulen , the remnants of the Livonian Brothers of the Sword were incorporated into the Teutonic Knights...
, and the rest to the first bishop of Lithuania, Kristyan. In the 14th–18th centuries, Raseiniai was one of the most important towns in the Samogitia region.

At the end of the 14th century the city became important centre, and its representative participated with others from the region in signing the peace treaty of Königsberg in 1390. At the end of the 15th century, Raseiniai was granted Magdeburg Rights
Magdeburg rights
Magdeburg Rights or Magdeburg Law were a set of German town laws regulating the degree of internal autonomy within cities and villages granted by a local ruler. Modelled and named after the laws of the German city of Magdeburg and developed during many centuries of the Holy Roman Empire, it was...
.

In the Polish–Lithuanian Commonwealth the city became important in the region. Government institutions were located there, and it served as a mercantile center for the area. In 1580 the local aristocrats met there in order to choose their representatives to the General Sejm
General sejm
The general sejm was the parliament of Poland for four centuries from the late 15th until the late 18th century.-Genesis:The power of early sejms grew during the period of Poland's fragmentation , when the power of individual rulers waned and that of various councils and wiece grew...
(parliament) in Warsaw. From 1585 Raseiniai served as the permanent location of the county parliament
Sejmik
A sejmik was a regional assembly in the Polish–Lithuanian Commonwealth, and earlier in the Kingdom of Poland. Sejmiks existed until the end of the Commonwealth in 1795 following the partitions of the Commonwealth...
. In 1792 city Magdeburg rights were renewed.


After the partitions of the Commonwealth

Historically, the chief articles of commerce were wood and grain for export. Because of its geographic position and distance from the railroad and the main highways, it became economically isolated. A fire in 1865 which almost destroyed the town also contributed to the city's decline in the latter half of the 19th Century.

In 1831, an insurrection against Tsarist oppression began in Raseiniai. On March 26, the rebels took Raseiniai and formed a provisional district government. Within a few days the insurrection spread throughout the entire country – and was later known as the 1831 Rebellion
November Uprising
The November Uprising , Polish–Russian War 1830–31 also known as the Cadet Revolution, was an armed rebellion in the heartland of partitioned Poland against the Russian Empire. The uprising began on 29 November 1830 in Warsaw when the young Polish officers from the local Army of the Congress...
.

The town long had a large Jewish presence. It was among the first Jewish communities established in Lithuania, and the city, which is known in Yiddish as Raseyn, became known as the "Jerusalem of Zamut." Jews continued to settle there in large numbers throughout the 17th century.

During most of the 19th century, the greater proportion of the town's population was Jewish and it was a center of the Jewish Haskalah
Haskalah
Haskalah , the Jewish Enlightenment, was a movement among European Jews in the 18th–19th centuries that advocated adopting enlightenment values, pressing for better integration into European society, and increasing education in secular studies, Hebrew language, and Jewish history...
(Enlightenment) movement. In 1842 the city had 7,455 inhabitants, the majority of whom were Jews. In 1866 the town had 10,579 inhabitants, of whom 8,290 were Jews. In 1897 the population of the district, excluding the town, was 221,731, of whom about 17,000 were Jews. After World War I, however, the Jewish community was smaller. By 1926 2,226 Jews lived in Raseiniai, and approximately 2,000 (40% of the general population) in 1939.

During most of the World War I, the town was occupied by the German army. In the spring of 1915, the Germans concentrated Army Group Lauenstein in the area of Tilsit, with three infantry and three cavalry divisions opposing one infantry division and units of border police and Russian volunteers. The Bavarian cavalry division swept through Raseiniai on April 14 en route to Šiauliai
Šiauliai
Šiauliai , is the fourth largest city in Lithuania, with a population of 133,900. It is the capital of Šiauliai County. Unofficially, the city is the capital of Northern Lithuania.-Names:...
. Refugees from Raseiniai appeared in Šiauliai on the morning of April 15 warning of the German advance.

When Lithuania regained Independence in 1918, Raseiniai became a district capital.

Tourists invariably pause at the "Samogitian" statue in the central town square. The sculpture serves as a symbol of the Samogitia ethnographical zone – a strong man resolutely stepping forward after having tamed a bear (an allusion to the 1831 Rebellion). On the sides of the base there are three bas-reliefs depicting the struggle with Tsarist oppression. The sculpture, which is the work of Vincas Grybas
Vincas Grybas
Vincas Grybas was a Lithuanian sculptor. Vincas Grybas was born in Lukiškės village where he also finished elementary school. Later he continued his studies at Warsaw art school. After World War I Grybas extended his studies in Kaunas and Paris...
(1890–1941), was erected in Raseiniai in 1933–1934.
The source of this article is wikipedia, the free encyclopedia.  The text of this article is licensed under the GFDL.