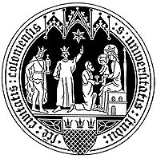 Encyclopedia
The University of Cologne (German
German language
German is a West Germanic language, related to and classified alongside English and Dutch. With an estimated 90 – 98 million native speakers, German is one of the world's major languages and is the most widely-spoken first language in the European Union....
Universität zu Köln) is one of the oldest universities
University
A university is an institution of higher education and research, which grants academic degrees in a variety of subjects. A university is an organisation that provides both undergraduate education and postgraduate education...
in Europe
Europe
Europe is, by convention, one of the world's seven continents. Comprising the westernmost peninsula of Eurasia, Europe is generally 'divided' from Asia to its east by the watershed divides of the Ural and Caucasus Mountains, the Ural River, the Caspian and Black Seas, and the waterways connecting...
and, with over 44,000 students, one of the largest universities in Germany
Germany
Germany , officially the Federal Republic of Germany , is a federal parliamentary republic in Europe. The country consists of 16 states while the capital and largest city is Berlin. Germany covers an area of 357,021 km2 and has a largely temperate seasonal climate...
. The university is part of the Deutsche Forschungsgemeinschaft
Deutsche Forschungsgemeinschaft
The Deutsche Forschungsgemeinschaft is an important German research funding organization and the largest such organization in Europe.-Function:...
, an association of Germany's leading research universities. It is furthermore the German founding member of the Community of European Management Schools and International Companies (CEMS).

The University of Cologne
Cologne
Cologne is Germany's fourth-largest city , and is the largest city both in the Germany Federal State of North Rhine-Westphalia and within the Rhine-Ruhr Metropolitan Area, one of the major European metropolitan areas with more than ten million inhabitants.Cologne is located on both sides of the...
was established in 1388 as the fourth university in the Holy Roman Empire
Holy Roman Empire
The Holy Roman Empire was a realm that existed from 962 to 1806 in Central Europe.It was ruled by the Holy Roman Emperor. Its character changed during the Middle Ages and the Early Modern period, when the power of the emperor gradually weakened in favour of the princes...
, after the Charles University of Prague (1348), the University of Vienna
University of Vienna
The University of Vienna is a public university located in Vienna, Austria. It was founded by Duke Rudolph IV in 1365 and is the oldest university in the German-speaking world...
(1365) and the Ruprecht Karl University of Heidelberg
Ruprecht Karl University of Heidelberg
The Ruprecht-Karls-Universität Heidelberg is a public research university located in Heidelberg, Baden-Württemberg, Germany. Founded in 1386, it is the oldest university in Germany and was the third university established in the Holy Roman Empire. Heidelberg has been a coeducational institution...
(1386). The charter was signed by Pope
Pope
The Pope is the Bishop of Rome, a position that makes him the leader of the worldwide Catholic Church . In the Catholic Church, the Pope is regarded as the successor of Saint Peter, the Apostle...
Urban VI. The university began teaching on January 6, 1389.
In 1798, the university was abolished by the French
French people
The French are a nation that share a common French culture and speak the French language as a mother tongue. Historically, the French population are descended from peoples of Celtic, Latin and Germanic origin, and are today a mixture of several ethnic groups...
, who had invaded Cologne in 1794, because under the new French constitution, universities were abolished all over France.The last rector Ferdinand Franz Wallraf was able to preserve the university’s Great Seal
Great Seal
- Countries :* Great Seal of Canada** Great Seal of Ontario* Great Seal of France* Seal of the President of Ireland* Great Seal of the Realm ** Great Seal of Northern Ireland** Great Seal of Scotland**Welsh Seal* Great Seal of the State...
, now once more in use.

In 1919, the by-then Prussian government endorsed a decision by the Cologne City Council to re-establish the university. On May 19, 1919, the then Cologne Mayor Konrad Adenauer
Konrad Adenauer
Konrad Hermann Joseph Adenauer was a German statesman. He was the chancellor of the West Germany from 1949 to 1963. He is widely recognised as a person who led his country from the ruins of World War II to a powerful and prosperous nation that had forged close relations with old enemies France,...
signed the charter of the modern university.

The University is a leader in the area of economics and is regularly placed in top positions for law and commerce, both for national and international rankings.

The university is divided into six faculties, which together offer 200 fields of study. The faculties are those of Management, Economics and Social Sciences, Law, Medicine (with the affiliated University clinic), Arts, Mathematics and Natural Sciences and Human Sciences.

On November 24, 2004, Axel Freimuth was elected as the Rector of the University. His four-year term began on April 1, 2005. He succeeded Tassilo Küpper and is the 49th Rector since 1919. He was previously Dean of Mathematics and Natural Sciences. 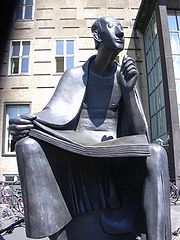 Over the centuries, scholars from Cologne have been among the most prominent in their fields, beginning with Albertus Magnus
Albertus Magnus
Albertus Magnus, O.P. , also known as Albert the Great and Albert of Cologne, is a Catholic saint. He was a German Dominican friar and a bishop, who achieved fame for his comprehensive knowledge of and advocacy for the peaceful coexistence of science and religion. Those such as James A. Weisheipl...
and his pupil Thomas Aquinas
Thomas Aquinas
Thomas Aquinas, O.P. , also Thomas of Aquin or Aquino, was an Italian Dominican priest of the Catholic Church, and an immensely influential philosopher and theologian in the tradition of scholasticism, known as Doctor Angelicus, Doctor Communis, or Doctor Universalis...
(both 13th century). Notable alumni of the 20th century include among others Kurt Alder
Kurt Alder
Kurt Alder was a German chemist and Nobel laureate.-Biography:Alder was born in the industrial area of Königshütte, Silesia , where he received his early schooling...
(Nobel Prize in Chemistry 1950), Peter Grünberg
Peter Grünberg
Peter Andreas Grünberg is a German physicist, and Nobel Prize in Physics laureate for his discovery with Albert Fert of giant magnetoresistance which brought about a breakthrough in gigabyte hard disk drives.-Biography:...
(Nobel Prize in Physics 2007), Heinrich Böll
Heinrich Böll
Heinrich Theodor Böll was one of Germany's foremost post-World War II writers. Böll was awarded the Georg Büchner Prize in 1967 and the Nobel Prize for Literature in 1972.- Biography :...
(Nobel Prize for Literature), Karl Carstens
Karl Carstens
Karl Carstens was a German politician. He served as President of the Federal Republic of Germany from 1979 to 1984.-Biography:...
(president of the Federal Republic of Germany 1979–1984), Gustav Heinemann
Gustav Heinemann
Gustav Walter Heinemann, GCB was a German politician. He was Mayor of the city of Essen from 1946 to 1949, West German Minister of the Interior from 1949 to 1950, Minister of Justice from 1966 to 1969 and President of the Federal Republic of Germany from 1969 to 1974.-Early years and professional...
(president of the Federal Republic of Germany 1969 to 1974), Karolos Papoulias
Karolos Papoulias
-Honours:*Knight Grand Cross with Grand Cordon of the Order of Merit of the Italian Republic *Knight Grand Cross of the Grand Order of King Tomislav *Knight of the Order of the Elephant- External links :*...
(current president of the Hellenic Republic), Amos Grunebaum
Amos Grunebaum
Amos Grunebaum is one of the top US obstetricians and gynecologists. His subspecialty is in maternal-fetal medicine.- Early life :...
(famous US obstetrician), and Erich Gutenberg
Erich Gutenberg
Erich Gutenberg was an influential German economist.He is considered the founder of modern German business studies after World War II. Gutenberg used microeconomy to explain the functioning of the enterprise. Therefore he also developed a new production function...
(founder of modern German business studies).