Encyclopedia
The Deutsche Forschungsgemeinschaft (DFG; German Research Foundation) is an important German
Germany
Germany , officially the Federal Republic of Germany , is a federal parliamentary republic in Europe. The country consists of 16 states while the capital and largest city is Berlin. Germany covers an area of 357,021 km2 and has a largely temperate seasonal climate...
research funding organization and the largest such organization in Europe
Europe
Europe is, by convention, one of the world's seven continents. Comprising the westernmost peninsula of Eurasia, Europe is generally 'divided' from Asia to its east by the watershed divides of the Ural and Caucasus Mountains, the Ural River, the Caspian and Black Seas, and the waterways connecting...
.

The DFG supports research in science
Science
Science is a systematic enterprise that builds and organizes knowledge in the form of testable explanations and predictions about the universe...
, engineering
Engineering
Engineering is the discipline, art, skill and profession of acquiring and applying scientific, mathematical, economic, social, and practical knowledge, in order to design and build structures, machines, devices, systems, materials and processes that safely realize improvements to the lives of...
, and the humanities
Humanities
The humanities are academic disciplines that study the human condition, using methods that are primarily analytical, critical, or speculative, as distinguished from the mainly empirical approaches of the natural sciences....
through a large variety of grant programmes, prize
Prize
A prize is an award to be given to a person or a group of people to recognise and reward actions or achievements. Official prizes often involve monetary rewards as well as the fame that comes with them...
s and by funding infrastructure. The self-governed organization is based in Bonn
Bonn
Bonn is the 19th largest city in Germany. Located in the Cologne/Bonn Region, about 25 kilometres south of Cologne on the river Rhine in the State of North Rhine-Westphalia, it was the capital of West Germany from 1949 to 1990 and the official seat of government of united Germany from 1990 to 1999....
and financed by the German states and the federal government. Only Germany's leading research universities are members of the DFG. 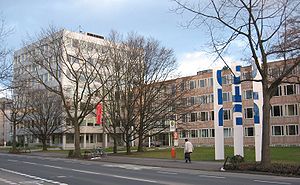 In 1937, the Notgemeinschaft der Wissenschaft (NG) was renamed the Deutsche Gemeinschaft zur Erhaltung und Förderung der Forschung ("German Association for the Support and Advancement of Scientific Research"), for short known as the Deutsche Forschungsgemeinschaft (DFG). By the end of World War II
World War II
World War II, or the Second World War , was a global conflict lasting from 1939 to 1945, involving most of the world's nations—including all of the great powers—eventually forming two opposing military alliances: the Allies and the Axis...
in Germany, in 1945, the DFG was no longer active. In 1949, after formation of the Federal Republic, it was re-founded as the NG and again from 1951 as the DFG.