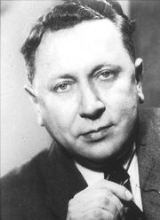 Encyclopedia
Kurt Alder was a German chemist
Chemistry
Chemistry is the science of matter, especially its chemical reactions, but also its composition, structure and properties. Chemistry is concerned with atoms and their interactions with other atoms, and particularly with the properties of chemical bonds....
and Nobel laureate.

Alder was born in the industrial area of Königshütte, Silesia (modern day Chorzów
Chorzów
Chorzów is a city in Silesia in southern Poland, near Katowice. Chorzów is one of the central districts of the Upper Silesian Metropolitan Union - a metropolis with a population of 2 million...
, Upper Silesia
Upper Silesia
Upper Silesia is the southeastern part of the historical and geographical region of Silesia. Since the 9th century, Upper Silesia has been part of Greater Moravia, the Duchy of Bohemia, the Piast Kingdom of Poland, again of the Lands of the Bohemian Crown and the Holy Roman Empire, as well as of...
, Poland
Poland
Poland , officially the Republic of Poland , is a country in Central Europe bordered by Germany to the west; the Czech Republic and Slovakia to the south; Ukraine, Belarus and Lithuania to the east; and the Baltic Sea and Kaliningrad Oblast, a Russian exclave, to the north...
), where he received his early schooling. Alder left the area for political reasons when Königshütte became part of Poland in 1922, he studied chemistry at the University of Berlin from 1922, and later at the University of Kiel
University of Kiel
The University of Kiel is a university in the city of Kiel, Germany. It was founded in 1665 as the Academia Holsatorum Chiloniensis by Christian Albert, Duke of Holstein-Gottorp and has approximately 23,000 students today...
where his PhD
Doctor of Philosophy
Doctor of Philosophy, abbreviated as Ph.D., PhD, D.Phil., or DPhil , in English-speaking countries, is a postgraduate academic degree awarded by universities...
was awarded in 1926 for work supervised by Diels
Otto Diels
Otto Paul Hermann Diels was a German chemist. He was the son of a professor of philology at the University of Berlin, where he himself earned his doctorate in chemistry, in the group of Emil Fischer....
.

In 1930 Alder was appointed reader for chemistry at Kiel
Kiel
Kiel is the capital and most populous city in the northern German state of Schleswig-Holstein, with a population of 238,049 .Kiel is approximately north of Hamburg. Due to its geographic location in the north of Germany, the southeast of the Jutland peninsula, and the southwestern shore of the...
, and promoted to lecturer in 1934. In 1936 he left Kiel to join I G Farben Industrie
IG Farben
I.G. Farbenindustrie AG was a German chemical industry conglomerate. Its name is taken from Interessen-Gemeinschaft Farbenindustrie AG . The company was formed in 1925 from a number of major companies that had been working together closely since World War I...
at Leverkusen
Leverkusen
Leverkusen is a city in North Rhine-Westphalia, Germany on the eastern bank of the Rhine. To the South, Leverkusen borders the city of Cologne and to the North is the state capital Düsseldorf....
, where he worked on synthetic rubber
Synthetic rubber
Synthetic rubber is is any type of artificial elastomer, invariably a polymer. An elastomer is a material with the mechanical property that it can undergo much more elastic deformation under stress than most materials and still return to its previous size without permanent deformation...
. Then in 1940 he was appointed Professor of Experimental Chemistry and Chemical Technology at the University of Cologne
University of Cologne
The University of Cologne is one of the oldest universities in Europe and, with over 44,000 students, one of the largest universities in Germany. The university is part of the Deutsche Forschungsgemeinschaft, an association of Germany's leading research universities...
and Director of the Institute of Chemistry there. Throughout this time and despite the many obstacles to original research in Europe at the time, he continued a systematic program of investigations of his particular interests in the synthesis
Organic synthesis
Organic synthesis is a special branch of chemical synthesis and is concerned with the construction of organic compounds via organic reactions. Organic molecules can often contain a higher level of complexity compared to purely inorganic compounds, so the synthesis of organic compounds has...
of organic compound
Organic compound
An organic compound is any member of a large class of gaseous, liquid, or solid chemical compounds whose molecules contain carbon. For historical reasons discussed below, a few types of carbon-containing compounds such as carbides, carbonates, simple oxides of carbon, and cyanides, as well as the...
s. In all he published more than 151 papers in this field.

Alder received several honorary degrees and other awards, most famously the 1950 Nobel Prize in Chemistry which he shared with his teacher Diels for their work on what is now known as the Diels-Alder reaction
Diels-Alder reaction
The Diels–Alder reaction is an organic chemical reaction between a conjugated diene and a substituted alkene, commonly termed the dienophile, to form a substituted cyclohexene system. The reaction can proceed even if some of the atoms in the newly formed ring are not carbon...
. The lunar
Moon
The Moon is Earth's only known natural satellite,There are a number of near-Earth asteroids including 3753 Cruithne that are co-orbital with Earth: their orbits bring them close to Earth for periods of time but then alter in the long term . These are quasi-satellites and not true moons. For more...
crater
Impact crater
In the broadest sense, the term impact crater can be applied to any depression, natural or manmade, resulting from the high velocity impact of a projectile with a larger body...
Alder is named in his honour. The insecticide aldrin
Aldrin
Aldrin is an organochlorine insecticide that was widely used until the 1970s, when it was banned in most countries. It is a colourless solid. Before the ban, it was heavily used as a pesticide to treat seed and soil...
, created through a Diels-Alder reaction, is also named after the scientist.