Encyclopedia
The Ugi reaction is a multi-component reaction
Multi-component reaction
In chemistry, a multi-component reaction , sometimes referred to as a "Multi-component Assembly Process" , is a chemical reaction where three or more compounds react to form a single product...
in organic chemistry
Organic chemistry
Organic chemistry is a subdiscipline within chemistry involving the scientific study of the structure, properties, composition, reactions, and preparation of carbon-based compounds, hydrocarbons, and their derivatives...
involving a ketone
Ketone
In organic chemistry, a ketone is an organic compound with the structure RCR', where R and R' can be a variety of atoms and groups of atoms. It features a carbonyl group bonded to two other carbon atoms. Many ketones are known and many are of great importance in industry and in biology...
or aldehyde
Aldehyde
An aldehyde is an organic compound containing a formyl group. This functional group, with the structure R-CHO, consists of a carbonyl center bonded to hydrogen and an R group....
, an amine
Amine
Amines are organic compounds and functional groups that contain a basic nitrogen atom with a lone pair. Amines are derivatives of ammonia, wherein one or more hydrogen atoms have been replaced by a substituent such as an alkyl or aryl group. Important amines include amino acids, biogenic amines,...
, an isocyanide
Isocyanide
An isocyanide is an organic compound with the functional group -N≡C. It is the isomer of the related cyanide , hence the prefix iso....
and a carboxylic acid
Carboxylic acid
Carboxylic acids are organic acids characterized by the presence of at least one carboxyl group. The general formula of a carboxylic acid is R-COOH, where R is some monovalent functional group...
to form a bis-amide
Amide
In chemistry, an amide is an organic compound that contains the functional group consisting of a carbonyl group linked to a nitrogen atom . The term refers both to a class of compounds and a functional group within those compounds. The term amide also refers to deprotonated form of ammonia or an...
.
The reaction is named after Ivar Karl Ugi
Ivar Karl Ugi
Ivar Karl Ugi was a German chemist who made major contributions to organic chemistry. He is known for the research on multicomponent reactions, yielding the Ugi reaction.-Biography:...
, who first published this reaction in 1959.

The Ugi reaction is exothermic
Exothermic
In thermodynamics, the term exothermic describes a process or reaction that releases energy from the system, usually in the form of heat, but also in the form of light , electricity , or sound...
and usually complete within minutes of adding the isocyanide. High concentration (0.5M - 2.0M) of reactants give the highest yields. Polar, aprotic solvent
Solvent
A solvent is a liquid, solid, or gas that dissolves another solid, liquid, or gaseous solute, resulting in a solution that is soluble in a certain volume of solvent at a specified temperature...
s, like DMF
Dimethylformamide
Dimethylformamide is an organic compound with the formula 2NCH. Commonly abbreviated as DMF , this colourless liquid is miscible with water and the majority of organic liquids. DMF is a common solvent for chemical reactions...
, work well. However, methanol
Methanol
Methanol, also known as methyl alcohol, wood alcohol, wood naphtha or wood spirits, is a chemical with the formula CH3OH . It is the simplest alcohol, and is a light, volatile, colorless, flammable liquid with a distinctive odor very similar to, but slightly sweeter than, ethanol...
and ethanol
Ethanol
Ethanol, also called ethyl alcohol, pure alcohol, grain alcohol, or drinking alcohol, is a volatile, flammable, colorless liquid. It is a psychoactive drug and one of the oldest recreational drugs. Best known as the type of alcohol found in alcoholic beverages, it is also used in thermometers, as a...
have also been used successfully. This uncatalyzed reaction has an inherent high atom economy
Atom economy
Atom economy describes the conversion efficiency of a chemical process in terms of all atoms involved . In an ideal chemical process, the amount of starting materials or reactants equals the amount of all products generated and no atom is wasted...
as only a molecule of water is lost and chemical yield in general are high. Recent research has shown that the Ugi reaction is accelerated in water.

Several reviews have been published.

In the Ugi reaction, the initial reaction is the formation of an imine
Imine
An imine is a functional group or chemical compound containing a carbon–nitrogen double bond, with the nitrogen attached to a hydrogen atom or an organic group. If this group is not a hydrogen atom, then the compound is known as a Schiff base...
(1) from the amine and the ketone. Subsequent reaction of the imine with the isocyanide and the carboxylic acid gives intermediate 2, which rearranges via an acyl transfer into the bis-amide 3. The exact mechanism of the trimolecular reaction to form intermediate 2 is not known.

The reaction can also be performed with a pre-formed imine. This results in an increased yield. 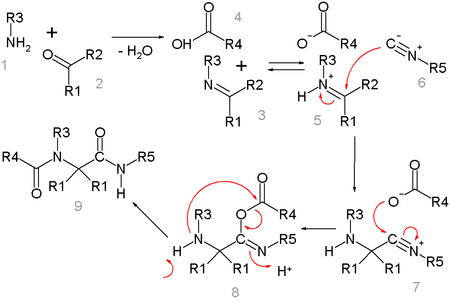 Amine
Amine
Amines are organic compounds and functional groups that contain a basic nitrogen atom with a lone pair. Amines are derivatives of ammonia, wherein one or more hydrogen atoms have been replaced by a substituent such as an alkyl or aryl group. Important amines include amino acids, biogenic amines,...
1 and ketone
Ketone
In organic chemistry, a ketone is an organic compound with the structure RCR', where R and R' can be a variety of atoms and groups of atoms. It features a carbonyl group bonded to two other carbon atoms. Many ketones are known and many are of great importance in industry and in biology...
2 form the imine
Alkylimino-de-oxo-bisubstitution
Alkylimino-de-oxo-bisubstitution in organic chemistry is the organic reaction of carbonyl compounds with amines to imines . The reaction name is based on the IUPAC Nomenclature for Transformations...
3 with loss of one equivalent of water. Proton exchange with carboxylic acid
Carboxylic acid
Carboxylic acids are organic acids characterized by the presence of at least one carboxyl group. The general formula of a carboxylic acid is R-COOH, where R is some monovalent functional group...
4 activates the iminium
Iminium
An iminium salt or cation in organic chemistry has the general structure [R1R2C=NR3R4]+ and is as such a protonated or substituted imine. It is an intermediate in many organic reactions such as the Beckmann rearrangement, Vilsmeier-Haack reaction, Stephen reaction or the Duff reaction...
ion 5 for nucleophilic addition
Nucleophilic addition
In organic chemistry, a nucleophilic addition reaction is an addition reaction where in a chemical compound a π bond is removed by the creation of two new covalent bonds by the addition of a nucleophile....
of the isocyanide 6 with its terminal carbon atom to nitrilium
Nitrilium
A nitrilium ion is a nitrile that has been protonated, [RCNH]+, or alkylated, [RCNR′]+.-Synthesis:Nitriles are only weakly basic and are poor nucleophiles, but they will attack very reactive electrophiles such as carbocations....
ion 7. A second nucleophilic addition takes place at this intermediate with the carboxylic acid anion to 8. The final step is a Mumm rearrangement
Mumm rearrangement
The Mumm rearrangement is an organic reaction and a rearrangement reaction. It describes a 1,3 acyl transfer of an acyl imidate or isoimide group to an imide.The reaction is of relevance as part of the Ugi reaction....
with transfer of the R4 acyl group from oxygen to nitrogen. Note that in the related Passerini reaction
Passerini reaction
The Passerini reaction is a chemical reaction involving an isocyanide, an aldehyde , and a carboxylic acid to form a α-acyloxy amide. This organic reaction was discovered by Mario Passerini in 1921 in Florence, Italy...
(lacking the amine) the isocyanide reacts directly with the carbonyl group but other aspects of the reaction are the same. All reaction steps are reversible
Reversible reaction
A reversible reaction is a chemical reaction that results in an equilibrium mixture of reactants and products. For a reaction involving two reactants and two products this can be expressed symbolically as...
except for the Mumm rearrangement, which drives the whole reaction sequence.

The usage of bifunctional reaction components greatly increases the diversity of possible reaction products. Likewise, several combinations lead to structurally interesting products. The Ugi reaction has been applied in combination with an intramolecular
Intramolecular
Intramolecular in chemistry describes a process or characteristic limited within the structure of a single molecule, a property or phenomenon limited to the extent of a single molecule.- Examples :...
Diels-Alder reaction
Diels-Alder reaction
The Diels–Alder reaction is an organic chemical reaction between a conjugated diene and a substituted alkene, commonly termed the dienophile, to form a substituted cyclohexene system. The reaction can proceed even if some of the atoms in the newly formed ring are not carbon...
in an extended multistep reaction.


Another combination (with separate workup of the Ugi intermediate) is one with the Buchwald-Hartwig reaction
Buchwald-Hartwig reaction
The Buchwald–Hartwig reaction is a chemical reaction used in organic chemistry for the synthesis of carbon–nitrogen bonds via the palladium-catalyzed cross-coupling of amines with aryl halides. Though publications with similar focus were published as early as 1983, credit for its development is...
. In the Ugi-Heck reaction a Heck aryl-aryl coupling
Heck reaction
The Heck reaction is the chemical reaction of an unsaturated halide with an alkene and a base and palladium catalyst to form a substituted alkene. Together with the other palladium-catalyzed cross-coupling reactions, this reaction is of great importance, as it allows one to do substitution...
takes place in a second step

Combination of amine and carboxylic acid

Several groups have used β-amino acids in the Ugi reaction to prepare β-lactams.
This approach relies on acyl transfer in the Mumm rearrangement to form the four-membered ring. The reaction proceeds in moderate yield at room temperature in methanol with formaldehyde or a variety of aryl aldehydes. For example, p-nitrobenzaldehyde reacts to form the β-lactam shown in 71% yield as a 4:1 diastereomeric mixture
Diastereomer
Diastereomers are stereoisomers that are not enantiomers.Diastereomerism occurs when two or more stereoisomers of a compound have different configurations at one or more of the equivalent stereocenters and are not mirror images of each other.When two diastereoisomers differ from each other at...
:

Zhang et al. have combined aldehydes with carboxylic acids and used the Ugi reaction to create lactam
Lactam
A lactam is a cyclic amide. Prefixes indicate how many carbon atoms are present in the ring: β-lactam , γ-lactam , δ-lactam...
s of various sizes. Short et al. have prepared γ-lactams from keto-acids on solid-support.

The Ugi reaction is one of the first reactions to be exploited explicitly to develop chemical libraries. These chemical libraries are sets of compounds that can be tested repeatedly. Using the principles of combinatorial chemistry
Combinatorial chemistry
Combinatorial chemistry involves the rapid synthesis or the computer simulation of a large number of different but structurally related molecules or materials...
, the Ugi reaction offers the possibility to synthesize a great number of different compounds in one reaction, by the reaction of various ketones (or aldehydes), amines, isocyanides and carboxylic acids. These libraries can then be tested with enzymes or living organisms to find new active pharmaceutical substances. One drawback is the lack of chemical diversity of the products. Using the Ugi reaction in combination with other reactions enlarges the chemical diversity of possible products.

Crixivan can be prepared using the Ugi reaction.

Additionally, many of the caine-type anesthetics are synthesized using this reaction. Examples include lidocaine
Lidocaine
Lidocaine , Xylocaine, or lignocaine is a common local anesthetic and antiarrhythmic drug. Lidocaine is used topically to relieve itching, burning and pain from skin inflammations, injected as a dental anesthetic or as a local anesthetic for minor surgery.- History :Lidocaine, the first amino...
and bupivacaine
Bupivacaine
Bupivacaine is a local anaesthetic drug belonging to the amino amide group. AstraZeneca commonly markets it under various trade names, including Marcain, Marcaine, Sensorcaine and Vivacaine.-Indications:...
.