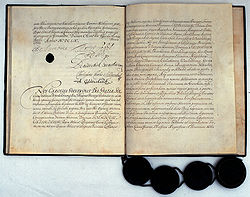 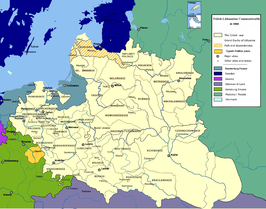 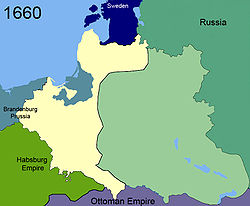 Sweden was accepted as sovereign in Swedish Livonia
Swedish Livonia
- Swedish infantry and cavalry regiments:Infantry regiments:* Garnisonsregementet i Riga * Guvenörsregementet i Riga * Livländsk infanteribataljon I...
, Brandenburg was accepted as sovereign in Ducal Prussia
Ducal Prussia
The Duchy of Prussia or Ducal Prussia was a duchy in the eastern part of Prussia from 1525–1701. It was the first Protestant duchy with a dominant German-speaking population, as well as Polish and Lithuanian minorities...
, and John II Casimir Vasa withdrew his claims to the Swedish throne, though he was to retain the title of a hereditary Swedish king for life. All occupied territories were restored to their pre-war sovereigns. Catholics in Livonia and Prussia were granted religious freedom.

The signatories were Holy Roman Emperor
Holy Roman Emperor
The Holy Roman Emperor is a term used by historians to denote a medieval ruler who, as German King, had also received the title of "Emperor of the Romans" from the Pope...
Leopold I
Leopold I, Holy Roman Emperor
| style="float:right;" | Leopold I was a Holy Roman Emperor, King of Hungary and King of Bohemia. A member of the Habsburg family, he was the second son of Emperor Ferdinand III and his first wife, Maria Anna of Spain. His maternal grandparents were Philip III of Spain and Margaret of Austria...
of Habsburg, Frederick William I, Elector of Brandenburg and King John II Casimir Vasa of Poland. Magnus Gabriel de la Gardie
Magnus Gabriel De la Gardie
Count Magnus Gabriel De la Gardie was a Swedish statesman and military man. He became a member of the Swedish Privy Council in 1647 and came to be the holder of three of the five offices counted as the Great Officers of the Realm, namely Lord High Treasurer, Lord High Chancellor and Lord High...
, head of the Swedish delegation and the minor regency, signed on behalf of his nephew, King Charles XI of Sweden
Charles XI of Sweden
Charles XI also Carl, was King of Sweden from 1660 until his death, in a period in Swedish history known as the Swedish empire ....
, who was still a minor at the time.

Negotiations had begun in Toruń
Torun
Toruń is an ancient city in northern Poland, on the Vistula River. Its population is more than 205,934 as of June 2009. Toruń is one of the oldest cities in Poland. The medieval old town of Toruń is the birthplace of the astronomer Nicolaus Copernicus....
(Thorn) in autumn of 1659; the Polish delegation later moved to Danzig
Gdansk
Gdańsk is a Polish city on the Baltic coast, at the centre of the country's fourth-largest metropolitan area.The city lies on the southern edge of Gdańsk Bay , in a conurbation with the city of Gdynia, spa town of Sopot, and suburban communities, which together form a metropolitan area called the...
while the Swedish delegation made the Baltic
Baltic Sea
The Baltic Sea is a brackish mediterranean sea located in Northern Europe, from 53°N to 66°N latitude and from 20°E to 26°E longitude. It is bounded by the Scandinavian Peninsula, the mainland of Europe, and the Danish islands. It drains into the Kattegat by way of the Øresund, the Great Belt and...
town of Sopot
Sopot
Sopot is a seaside town in Eastern Pomerania on the southern coast of the Baltic Sea in northern Poland, with a population of approximately 40,000....
(Zoppot) its base.

On the other hand, The Danish
Denmark
Denmark is a Scandinavian country in Northern Europe. The countries of Denmark and Greenland, as well as the Faroe Islands, constitute the Kingdom of Denmark . It is the southernmost of the Nordic countries, southwest of Sweden and south of Norway, and bordered to the south by Germany. Denmark...
and Dutch
Netherlands
The Netherlands is a constituent country of the Kingdom of the Netherlands, located mainly in North-West Europe and with several islands in the Caribbean. Mainland Netherlands borders the North Sea to the north and west, Belgium to the south, and Germany to the east, and shares maritime borders...
envoys, as well as those of the Holy Roman Empire
Holy Roman Empire
The Holy Roman Empire was a realm that existed from 962 to 1806 in Central Europe.It was ruled by the Holy Roman Emperor. Its character changed during the Middle Ages and the Early Modern period, when the power of the emperor gradually weakened in favour of the princes...
and Brandenburg
Brandenburg
Brandenburg is one of the sixteen federal-states of Germany. It lies in the east of the country and is one of the new federal states that were re-created in 1990 upon the reunification of the former West Germany and East Germany. The capital is Potsdam...
, did what they could to derail the proceedings. Their goal was assisted by the drawn-out formalities which always took place at negotiations of this age. Several months elapsed before the actual peace negotiations could begin, on January 7, 1660 (old style). Even then, so many hostile words were written in the documents being exchanged by the two parties that the head negotiator, French ambassador De l'Hombres, found himself having to expurgate long sections which otherwise would have caused offense.

A Polish contingent headed by the archbishop
Archbishop
An archbishop is a bishop of higher rank, but not of higher sacramental order above that of the three orders of deacon, priest , and bishop...
of Gnesen wanted the war to continue in order to expel the exhautsed Swedish forces in Livonia. The Danish delegates demanded of Poland conclude a treaty together with Denmark; the Poles did however not want to tie themselves to the outcome of the poor Danish fortunes of war against Sweden. Austria, which wished to drive Sweden out of Germany through continued warfare, promised Poland reinforcements, but the Austrian intentions were treated with suspicion and the Polish senate demurred. Even elector Frederick William of Brandenburg offered assistance to Poland to continue the war, with the hope of conquering Swedish Pomerania
Swedish Pomerania
Swedish Pomerania was a Dominion under the Swedish Crown from 1630 to 1815, situated on what is now the Baltic coast of Germany and Poland. Following the Polish War and the Thirty Years' War, Sweden held extensive control over the lands on the southern Baltic coast, including Pomerania and parts...
.

France, which in practice was goverend by Cardinal Mazarin, wanted a continued Swedish presence in Germany to counterbalance Austria and Spain
Spain
Spain , officially the Kingdom of Spain languages]] under the European Charter for Regional or Minority Languages. In each of these, Spain's official name is as follows:;;;;;;), is a country and member state of the European Union located in southwestern Europe on the Iberian Peninsula...
, which were traditional enemies of France. France also feared that a continued war would increase Austria's influence in Germany and Poland. The Austrian and Brandenburgian intrusion into Swedish Pomerania was considered a broach of the Peace of Westphalia
Peace of Westphalia
The Peace of Westphalia was a series of peace treaties signed between May and October of 1648 in Osnabrück and Münster. These treaties ended the Thirty Years' War in the Holy Roman Empire, and the Eighty Years' War between Spain and the Dutch Republic, with Spain formally recognizing the...
, which France was under the obligation to prosecute. France therefore threatened to contribute an army of 30,000 soldiers to the Swedish cause unless a treaty between Sweden and Brandenburg was concluded before February 1660.
When news of the death of king Charles X of Sweden arrived Poland, Austria, and Brandenburg began increasing their demands, but a new French threat of assistance to Sweden finally made the Polish side give in. The treaty was signed in the monastery of Oliwa
Oliwa Cathedral
Gdańsk Oliwa Archcathedral is a church located in Gdańsk, Oliwa district; dedicated to The Holy Trinity, Blessed Virgin Mary and St Bernard.- Cathedral :...
on April 23, 1660.

In the treaty John II Casimir renounced his claims to the Swedish crown, which his father Sigismund III Vasa
Sigismund III Vasa
Sigismund III Vasa was King of Poland and Grand Duke of Lithuania, a monarch of the united Polish–Lithuanian Commonwealth from 1587 to 1632, and King of Sweden from 1592 until he was deposed in 1599...
had lost in 1599. Poland also formally ceded to Sweden Livonia and the city of Riga
Riga
Riga is the capital and largest city of Latvia. With 702,891 inhabitants Riga is the largest city of the Baltic states, one of the largest cities in Northern Europe and home to more than one third of Latvia's population. The city is an important seaport and a major industrial, commercial,...
, which had been under Swedish control since the 1620s. The treaty settled conflicts between Sweden and Poland left standing since the War against Sigismund
War against Sigismund
The war against Sigismund was a war between Duke Charles, later King Charles IX and Sigismund, King of Sweden and Poland. Lasting from 1598 to 1599, it is also called War of Deposition against Sigismund, since the focus of the conflicts was the attempt to depose the latter from the throne of Sweden...
(1598-1599), the Polish-Swedish War (1600-1629), and the Northern Wars
Northern Wars
Northern Wars is a term used for a series of wars fought in northern and northeastern Europe in the 16th and 17th century. An internationally agreed nomenclature for these wars has not yet been devised...
(1655-1660).

The Hohenzollern dynasty of Brandenburg
Margraviate of Brandenburg
The Margraviate of Brandenburg was a major principality of the Holy Roman Empire from 1157 to 1806. Also known as the March of Brandenburg , it played a pivotal role in the history of Germany and Central Europe....
was also confirmed as independent and sovereign over the Duchy of Prussia; previously they had held the territory as a fief of Poland. In case of an end to the Hohenzollern dynasty in Prussia, the territory was to revert to the Polish crown. The treaty was achieved by Brandenburg's diplomat, Christoph Caspar von Blumenthal
Von Blumenthal
The von Blumenthal family are German nobility from Brandenburg-Prussia. Other, unrelated, families of this name exist in Switzerland and formerly in Russia, and many unrelated families called "Blumenthal" without "von" are to be found worldwide.The family was already noble from earliest times ,...
, on the first diplomatic mission of his career.