The republic's roots date back to the dissolution of the Russian Empire
Russian Empire
The Russian Empire was a state that existed from 1721 until the Russian Revolution of 1917. It was the successor to the Tsardom of Russia and the predecessor of the Soviet Union...
in 1917, during the October Revolution
October Revolution
The October Revolution , also known as the Great October Socialist Revolution , Red October, the October Uprising or the Bolshevik Revolution, was a political revolution and a part of the Russian Revolution of 1917...
, when the provinces of the Caucasus
Caucasus
The Caucasus, also Caucas or Caucasia , is a geopolitical region at the border of Europe and Asia, and situated between the Black and the Caspian sea...
seceded and formed their own federal state called the Transcaucasian Federation
Transcaucasian Democratic Federative Republic
The Transcaucasian Democratic Federative Republic , was a short-lived state composed of the modern-day countries of Armenia, Azerbaijan, and Georgia in the South Caucasus.-...
. Competing national interests and war with Turkey
Turkey
Turkey , known officially as the Republic of Turkey , is a Eurasian country located in Western Asia and in East Thrace in Southeastern Europe...
led to the dissolution of the republic half a year later, in April 1918.


Names in the languages of the constituent republics 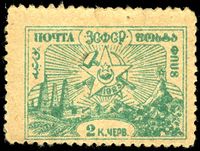 Before 1923, each of Georgia, Armenia, and Azerbaijan issued its own postage stamp
Postage stamp
A postage stamp is a small piece of paper that is purchased and displayed on an item of mail as evidence of payment of postage. Typically, stamps are made from special paper, with a national designation and denomination on the face, and a gum adhesive on the reverse side...
s. The Federation began issuing its own stamps on September 15, 1923, and superseded the separate republics' issues on October 1. The first issues consisted of some of the stamps of Russia and Armenia overprint
Overprint
An overprint is an additional layer of text or graphics added to the face of a postage stamp or banknote after it has been printed. Post offices most often use overprints for internal administrative purposes such as accounting but they are also employed in public mail...
ed with a star containing the five-letter acronym of the federation inside the points. Massive inflation
Inflation
In economics, inflation is a rise in the general level of prices of goods and services in an economy over a period of time.When the general price level rises, each unit of currency buys fewer goods and services. Consequently, inflation also reflects an erosion in the purchasing power of money – a...
having set in, this was followed by an issue of the Federation's own designs, four values of a view of oil field
Oil field
An oil field is a region with an abundance of oil wells extracting petroleum from below ground. Because the oil reservoirs typically extend over a large area, possibly several hundred kilometres across, full exploitation entails multiple wells scattered across the area...
s, and four with a montage of Soviet symbols over mountains and oil derricks, values ranging from 40,000 to 500,000 rubles
Russian ruble
The ruble or rouble is the currency of the Russian Federation and the two partially recognized republics of Abkhazia and South Ossetia. Formerly, the ruble was also the currency of the Russian Empire and the Soviet Union prior to their breakups. Belarus and Transnistria also use currencies with...
. The 40,000 руб and 75,000 руб were then surcharged to 700,000 rubles. On October 24, the stamps were re-issued with values from 1 to 18 gold kopecks. Starting in 1924, the Federation used stamps of the Soviet Union
Soviet Union
The Soviet Union , officially the Union of Soviet Socialist Republics , was a constitutionally socialist state that existed in Eurasia between 1922 and 1991....
.

Most of the stamps of the Federation are not especially rare today, with 1998 prices in the US$1–2 range, although the overprints on Armenian stamps range up to US$200. As might be expected from a short period of usage, used stamps are less common than unused, and cover
Cover (philately)
In philately, the term cover pertains to the outside of an envelope or package with an address, typically with postage stamps that have been cancelled and is a term generally used among stamp and postal history collectors. The term does not include the contents of the letter or package, although...
s are not often seen.