In philately
Philately
Philately is the study of stamps and postal history and other related items. Philately involves more than just stamp collecting, which does not necessarily involve the study of stamps. It is possible to be a philatelist without owning any stamps...
, the term cover pertains to the outside of an envelope
Envelope
An envelope is a common packaging item, usually made of thin flat material. It is designed to contain a flat object, such as a letter or card....
or package
Package
Package can refer to:* Packaging and labeling* Package testing* Mail item larger than a letter* Chip package or chip carrier, in electronics, the material added around a component or integrated circuit to allow it to be handled without damage and incorporated into a circuit* Automotive package, in...
with an address, typically with postage stamp
Postage stamp
A postage stamp is a small piece of paper that is purchased and displayed on an item of mail as evidence of payment of postage. Typically, stamps are made from special paper, with a national designation and denomination on the face, and a gum adhesive on the reverse side...
s that have been cancelled and is a term generally used among stamp and postal history collectors. The term does not include the contents of the letter or package, although they may add interest to the item if still present. Cover collecting plays an important role in Postal History as many covers bear stamps, postmarks and other markings along with names and addresses all of which help to place a cover at a given time and place in history. 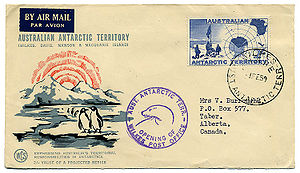 The term originates from the practice of covering a letter by folding a separate sheet about it to physically protect it and prevent infringement of confidentiality. In the first half of the 19th century it became the fashion to cut the cover into a diamond or lozenge shape. This was the precursor of the version of the envelope known today. Its convenience and popularity led to the lozenge design being adopted for the special pre-paid postage envelopes and covers issued in 1840 after postal reforms were introduced by Rowland Hill
Rowland Hill (postal reformer)
Sir Rowland Hill KCB, FRS was an English teacher, inventor and social reformer. He campaigned for a comprehensive reform of the postal system, based on the concept of penny postage and his solution of prepayment, facilitating the safe, speedy and cheap transfer of letters...
and others.

There are several different basic categories for covers. Names for cover types is also terminology usually used by collectors of stamps and postal history. There exist a wide variety of covers that can fit into several basic categories. The categories begin with the most common types of collectible covers, such as first day covers or first flight covers. Sometimes there will be an area of overlap in the subject of categories. For example there are First day covers that were also sent with mail aboard airplanes on First flight mail runs. Event covers can also include, First flights, or other types of covers. A military cover sent to a head of state can also be referred to as a Historic cover.


Other specialty types of covers include Censored covers
Postal censorship
Postal censorship is the inspection or examination of mail, most often by governments. It can include opening, reading and total or selective obliteration of letters and their contents, as well as covers, postcards, parcels and other postal packets. Postal censorship takes place primarily but not...
along with Blockade mail, Pony Express
Pony Express
The Pony Express was a fast mail service crossing the Great Plains, the Rocky Mountains, and the High Sierra from St. Joseph, Missouri, to Sacramento, California, from April 3, 1860 to October 1861...
covers, Prisoner of war covers and Patriotic covers, among others.

The availability of the different types of covers varies considerably and is something that often adds perspective to the historical and philatelic significance of the cover. For example, First Day covers and First Flight covers are generally common because the events that inspired the creation of these covers were somewhat common. In other examples, various types of military and historical covers are often scarce or rare because the circumstances or events that prompted the creation of these covers were conversely uncommon. While covers sent in recent decades tend to be common, they can also prove to be scarce simply because the circumstance that created these covers were (sometimes very) uncommon, as are the various examples of historical covers i.e. sent by a head of state to another officially prominent individual. At the same time there exist covers that are quite old but are still common and not very difficult to find, as are various types of post cards or commercial covers. Patriot covers are generally common because the practice of sending these was popular, especially during periods of war. Patriotic cover availability here can vary also depending on the country and time period in question. Covers collected for the stamp on cover can vary greatly in availability and generally depends on the availability of the stamp issue itself along with the demand for the use of a particular denomination. The denomination of a stamp often determines the availability of the issue on cover as the use of some, usually higher, denominations was uncommon because of the low demand for a particular postage rate. There are a number of circumstances that can effect the availability of a given cover type and which often contribute to a cover's historical and philatelic value.