The total land area of the MRNC was about 70000 square kilometres (27,027.2 sq mi), with a population of about 1 million. Its capital was initially at Vladikavkaz
Vladikavkaz
-Notable structures:In Vladikavkaz, there is a guyed TV mast, tall, built in 1961, which has six crossbars with gangways in two levels running from the mast structure to the guys.-Twin towns/sister cities:...
, then Nazran
Nazran
Nazran is a town in the Republic of Ingushetia, Russia. It served as the republic's capital in 1991–2000, until the town of Magas was specially built as the new capital. Nazran is the largest city of the republic: -General:...
, and finally Temir-Khan-Shura
Buynaksk
Buynaksk is a town in the Republic of Dagestan, Russia, located at the foothills of the Greater Caucasus on the Shura-Ozen River, southwest of the republic's capital Makhachkala. Population: 40,000 ....
.

The "Union of the Peoples of the Northern Caucasus" was created in March 1917, and an Executive Committee of the Union was elected. The Chairman of the Executive Committee was one of the leaders of the National‐Liberation movement of the Peoples of the Northern Caucasus, Tapa Tchermoeff
Tapa Tchermoeff
Abdul "Tapa" Midgit Bey Ortsa Tchermoeff was the first and last Prime Minister of the Mountainous Republic of the Northern Caucasus. He was in office from May 11, 1918 until the entire government was forced into exile by the advancing Bolsheviks in 1921...
. The "Nizam" of Imam Shamil
Imam Shamil
Imam Shamil also spelled Shamyl, Schamil, Schamyl or Shameel was an Avar political and religious leader of the Muslim tribes of the Northern Caucasus...
(the Constitution of Shamil of 1847) was adopted on 5 August 1917 by the "Central Committee of the Northern Caucasus". The republic was officially established on 11 May 1918, after the collapse of the Russian Tsarist empire in the Russian revolution of 1917
Russian Revolution of 1917
The Russian Revolution is the collective term for a series of revolutions in Russia in 1917, which destroyed the Tsarist autocracy and led to the creation of the Soviet Union. The Tsar was deposed and replaced by a provisional government in the first revolution of February 1917...
, when the Government of the MRNC was established.

The main founders of the MRNC included Said Shamil (grandson of Imam Shamil
Imam Shamil
Imam Shamil also spelled Shamyl, Schamil, Schamyl or Shameel was an Avar political and religious leader of the Muslim tribes of the Northern Caucasus...
, who in 1924 would become a founder and leader of the "Committee of Independence of the Caucasus" in Germany
Germany
Germany , officially the Federal Republic of Germany , is a federal parliamentary republic in Europe. The country consists of 16 states while the capital and largest city is Berlin. Germany covers an area of 357,021 km2 and has a largely temperate seasonal climate...
), Prime Minister
Prime minister
A prime minister is the most senior minister of cabinet in the executive branch of government in a parliamentary system. In many systems, the prime minister selects and may dismiss other members of the cabinet, and allocates posts to members within the government. In most systems, the prime...
Tapa Tchermoeff
Tapa Tchermoeff
Abdul "Tapa" Midgit Bey Ortsa Tchermoeff was the first and last Prime Minister of the Mountainous Republic of the Northern Caucasus. He was in office from May 11, 1918 until the entire government was forced into exile by the advancing Bolsheviks in 1921...
, Sheikh
Sheikh
Not to be confused with sikhSheikh — also spelled Sheik or Shaikh, or transliterated as Shaykh — is an honorific in the Arabic language that literally means "elder" and carries the meaning "leader and/or governor"...
Ali-Khaji Akusha and Haidar Bamat. The Republic's capital was Temir-Khan-Shura. 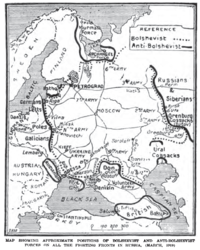 During the Russian Civil War
Russian Civil War
The Russian Civil War was a multi-party war that occurred within the former Russian Empire after the Russian provisional government collapsed to the Soviets, under the domination of the Bolshevik party. Soviet forces first assumed power in Petrograd The Russian Civil War (1917–1923) was a...
, the Mountaineers were engaged in fierce clashes against the invading White
White movement
The White movement and its military arm the White Army - known as the White Guard or the Whites - was a loose confederation of Anti-Communist forces.The movement comprised one of the politico-military Russian forces who fought...
troops of General Anton Denikin's Volunteer Army
Volunteer Army
The Volunteer Army was an anti-Bolshevik army in South Russia during the Russian Civil War of 1918-1920....
. The fighting ended in January 1920, when Denikin's army was completely defeated by the XI Red Army. The advancing Red Army was at first greeted with red flags in the villages of the Northern Caucasus, but the promises of autonomous rule made by the Bolsheviks went unrealized.

In June 1920, the MRNC was occupied by the Red Army of Bolshevik Russia and the Government of the republic was forced to leave the Caucasus. In January 1921 the Soviet Mountain Republic
Soviet Mountain Republic
Mountain Autonomous Soviet Socialist Republic or Mountain ASSR was a short-lived autonomous republic within the Russian SFSR in the Northern Caucasus that existed from January 20, 1921 to July 7, 1924....
of the Russian SFSR was established.