Encyclopedia
The Trans-Siberian Highway is the unofficial name for a network of federal highways that span the width of Russia
Russia
Russia or , officially known as both Russia and the Russian Federation , is a country in northern Eurasia. It is a federal semi-presidential republic, comprising 83 federal subjects...
from the Baltic Sea
Baltic Sea
The Baltic Sea is a brackish mediterranean sea located in Northern Europe, from 53°N to 66°N latitude and from 20°E to 26°E longitude. It is bounded by the Scandinavian Peninsula, the mainland of Europe, and the Danish islands. It drains into the Kattegat by way of the Øresund, the Great Belt and...
of the Atlantic Ocean
Atlantic Ocean
The Atlantic Ocean is the second-largest of the world's oceanic divisions. With a total area of about , it covers approximately 20% of the Earth's surface and about 26% of its water surface area...
to the Japan Sea of the Pacific Ocean
Pacific Ocean
The Pacific Ocean is the largest of the Earth's oceanic divisions. It extends from the Arctic in the north to the Southern Ocean in the south, bounded by Asia and Australia in the west, and the Americas in the east.At 165.2 million square kilometres in area, this largest division of the World...
. In the Asian Highway Network
Asian Highway Network
The Asian Highway project, also known as the Great Asian Highway, is a cooperative project among countries in Asia and Europe and the United Nations Economic and Social Commission for Asia and the Pacific , to improve the highway systems in Asia...
, the route is known as AH6
AH6
AH6 is a route in the Asian Highway Network. It runs from Busan, South Korea to the border between Russia and Belarus. Altogether it is 6545 miles long....
. It stretches over 11000 kilometres (6,835.1 mi) from St. Petersburg
Saint Petersburg
Saint Petersburg is a city and a federal subject of Russia located on the Neva River at the head of the Gulf of Finland on the Baltic Sea...
to Vladivostok
Vladivostok
The city is located in the southern extremity of Muravyov-Amursky Peninsula, which is about 30 km long and approximately 12 km wide.The highest point is Mount Kholodilnik, the height of which is 257 m...
. The road disputes the title of the longest national highway in the world with the Trans-Canada Highway
Trans-Canada Highway
The Trans-Canada Highway is a federal-provincial highway system that joins the ten provinces of Canada. It is, along with the Trans-Siberian Highway and Australia's Highway 1, one of the world's longest national highways, with the main route spanning 8,030 km...
and Australia's Highway 1
Highway 1 (Australia)
Australia's Highway 1 is a network of highways that circumnavigate the Australian continent, joining all mainland state capitals. At a total length of approximately it is the longest national highway in the world, longer than the Trans-Siberian Highway and the Trans-Canada Highway...
. 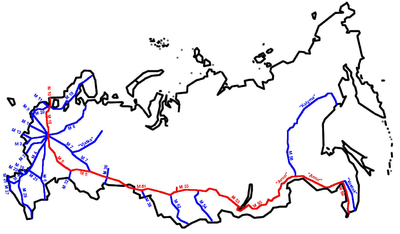 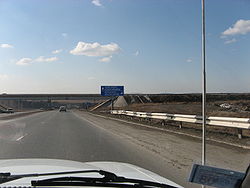 The route, in places coinciding with European route E30
European route E30
European route E 30 is an A-Class West-East European route, extending from the southern Irish port of Cork in the west to the Russian city of Omsk in the east...
and passing through the country of Kazakhstan
Kazakhstan
Kazakhstan , officially the Republic of Kazakhstan, is a transcontinental country in Central Asia and Eastern Europe. Ranked as the ninth largest country in the world, it is also the world's largest landlocked country; its territory of is greater than Western Europe...
across a distance of about 190 kilometres, consists of seven federal highways:

The most problematic stretch of the highway lay between Chita and Khabarovsk. The first section of this route, linking Belogorsk
Belogorsk, Amur Oblast
Belogorsk is a town in Amur Oblast, Russia, located on the Tom River, a tributary of the Zeya. Population: 67,400 ; 53,000 ; 34,000 .-History:...
to Blagoveshchensk
Blagoveshchensk
Blagoveshchensk is a city and the administrative center of Amur Oblast, Russia. Population: -Early history of the region:The early residents of both sides of the Amur in the region of today's Blagoveshchensk were the Daurs and Duchers...
(124 km in length), was constructed by gulag
Gulag
The Gulag was the government agency that administered the main Soviet forced labor camp systems. While the camps housed a wide range of convicts, from petty criminals to political prisoners, large numbers were convicted by simplified procedures, such as NKVD troikas and other instruments of...
inmates as early as 1949. Extended and updated between 1998 and 2001, this road forms part of the Asian route AH31 connecting Belogorsk to Dalian
Dalian
Dalian is a major city and seaport in the south of Liaoning province, Northeast China. It faces Shandong to the south, the Yellow Sea to the east and the Bohai Sea to the west and south. Holding sub-provincial administrative status, Dalian is the southernmost city of Northeast China and China's...
in China
China
Chinese civilization may refer to:* China for more general discussion of the country.* Chinese culture* Greater China, the transnational community of ethnic Chinese.* History of China* Sinosphere, the area historically affected by Chinese culture...
.

The Chita-Khabarovsk road remained largely unfinished up until early 2004, when Russian President Vladimir Putin
Vladimir Putin
Vladimir Vladimirovich Putin served as the second President of the Russian Federation and is the current Prime Minister of Russia, as well as chairman of United Russia and Chairman of the Council of Ministers of the Union of Russia and Belarus. He became acting President on 31 December 1999, when...
symbolically opened the Amur Highway, with great swaths of forest separating major portions from one another. Jim Oliver and Dennis O'Neil rode motorbikes across Russia, along the Trans-Siberian Highway, during the last week of May and the first three weeks of June in 2004:back then, as described in Jim Oliver's book, Lucille and The XXX Road, the section between Chita and Khabarovsk was an extremely challenging undertaking among marsh, gravel, rock, mud, sand, washboard, potholes, stream fording and detours of the elusive highway with a noticeable absence of pavement. In the following years the road, in some places was a modern paved highway with painted reflective lane-lines, while in others a single lane meandering, pockmarked, loose-gravel trail following the route of the early 20th century Amur Cart Road
Amur Cart Road
The Amur Cart Road or Amur Wheel Road was a 2,000 km cartage road in Amur Oblast of Imperial Russia that connected Khabarovsk with Blagoveshchensk through mostly uninhabited areas of taiga and swamps.The road was built during 1898–1909 with nearly exclusive usage of katorga...
. Completion of a 7-metre-wide highway between Chita and Khabarovsk was slated for 2010: now the road is in very good condition, completely upgraded and enlarged and with a smooth surface. Asphalt
Asphalt
Asphalt or , also known as bitumen, is a sticky, black and highly viscous liquid or semi-solid that is present in most crude petroleums and in some natural deposits, it is a substance classed as a pitch...
paving of the highway is expected to continue until 2016.

The road from
Siberian Route
The Siberian Route , also known as the Moscow Route and Great Route , was a historic route that connected European Russia to Siberia and China. Previously Siberian transport had been mostly by river via Siberian River Routes...
St. Peterburg to Irkutsk existed already before the railway era. It was featured in the novel Michael Strogoff: The Courier of the Czar
Michael Strogoff
Michael Strogoff: The Courier of the Czar is a novel written by Jules Verne in 1876. Critics consider it one of Verne's best books. Unlike some of Verne's other famous novels, it is not science fiction, but a scientific phenomenon is a plot device. The book was later adapted to a play, by Verne...
by Jules Verne
Jules Verne
Jules Gabriel Verne was a French author who pioneered the science fiction genre. He is best known for his novels Twenty Thousand Leagues Under the Sea , A Journey to the Center of the Earth , and Around the World in Eighty Days...
written in 1876.

The megalithic nature of the project has spawned several legends. For example, an inexplicable semicircle is said to exist somewhere that breaks the straight line of a segment. The explanation would be that when Joseph Stalin
Joseph Stalin
Joseph Vissarionovich Stalin was the Premier of the Soviet Union from 6 May 1941 to 5 March 1953. He was among the Bolshevik revolutionaries who brought about the October Revolution and had held the position of first General Secretary of the Communist Party of the Soviet Union's Central Committee...
used a ruler to mark where the highway should pass the pencil jumped over his finger and the engineers that were under threat to make the segment exactly as commanded did not deviate from the drawing.