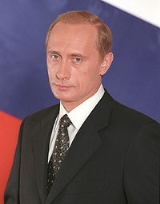 Because of constitutionally
Constitution of Russia
The current Constitution of the Russian Federation was adopted by national referendum on 12 December 1993. Russia's constitution came into force on 25 December 1993, at the moment of its official publication...
mandated term limits, Putin was ineligible to run for a third consecutive presidential term.

Whoever does not miss the Soviet Union has no heart. Whoever wants it back has no brain.

First, we are working hard now on creating a genuine multiparty system. Second, we are redistributing powers between the federal, regional and municipal authorities.