Encyclopedia
Chelyabinsk is a city and the administrative center of Chelyabinsk Oblast
Chelyabinsk Oblast
-External links:*...
, Russia
Russia
Russia or , officially known as both Russia and the Russian Federation , is a country in northern Eurasia. It is a federal semi-presidential republic, comprising 83 federal subjects...
, located in the northwestern side of the oblast, 210 kilometres (130.5 mi) south of Yekaterinburg
Yekaterinburg
Yekaterinburg is a major city in the central part of Russia, the administrative center of Sverdlovsk Oblast. Situated on the eastern side of the Ural mountain range, it is the main industrial and cultural center of the Urals Federal District with a population of 1,350,136 , making it Russia's...
, just to the east of the Ural Mountains
Ural Mountains
The Ural Mountains , or simply the Urals, are a mountain range that runs approximately from north to south through western Russia, from the coast of the Arctic Ocean to the Ural River and northwestern Kazakhstan. Their eastern side is usually considered the natural boundary between Europe and Asia...
, on the Miass River
Miass River
Miass River is a river on the eastern side of the Ural Mountains near Chelyabinsk. It flows mainly northeast to join the Iset River which continues northeast to join the north-flowing Tobol River which leads to the Ob River and the Arctic Ocean. Located mostly in Chelyabinsk Oblast and Kurgan...
. Population:

For several months during the Russian Civil War
Russian Civil War
The Russian Civil War was a multi-party war that occurred within the former Russian Empire after the Russian provisional government collapsed to the Soviets, under the domination of the Bolshevik party. Soviet forces first assumed power in Petrograd The Russian Civil War (1917–1923) was a...
, Chelyabinsk was held by the White movement
White movement
The White movement and its military arm the White Army - known as the White Guard or the Whites - was a loose confederation of Anti-Communist forces.The movement comprised one of the politico-military Russian forces who fought...
and Czechoslovak Legions
Czechoslovak Legions
The Czechoslovak Legions were volunteer armed forces composed predominantly of Czechs and Slovaks fighting together with the Entente powers during World War I...
, becoming a center for splinters of the Romanian Volunteer Corps in Russia
Romanian Volunteer Corps in Russia
The Romanian Volunteer Corps in Russia , or Volunteer Corps of Transylvanians-Bukovinans , was a military formation of World War I, created from ethnic Romanian prisoners of war held by Russia...
. The city later fell to Bolshevik Russian
Russian Soviet Federative Socialist Republic
The Russian Soviet Federative Socialist Republic , commonly referred to as Soviet Russia, Bolshevik Russia, or simply Russia, was the largest, most populous and economically developed republic in the former Soviet Union....
forces. In the decades after the Finnish Civil War
Finnish Civil War
The Finnish Civil War was a part of the national, political and social turmoil caused by World War I in Europe. The Civil War concerned control and leadership of The Grand Duchy of Finland as it achieved independence from Russia after the October Revolution in Petrograd...
in 1918, some 15,000 "Red" Finns
Red Guards (Finland)
The Red Guards formed the army of Red Finland during the Finnish Civil War in 1918. The combined strength of the Red Guard was about 30,000 at the beginning of the Civil War, and peaked at 90,000-120,000 during the course of the conflict....
defected into the Soviet Union
Soviet Union
The Soviet Union , officially the Union of Soviet Socialist Republics , was a constitutionally socialist state that existed in Eurasia between 1922 and 1991....
. Most of them were transferred to Chelyabinsk via railway. In 1938, during the Great Purge
Great Purge
The Great Purge was a series of campaigns of political repression and persecution in the Soviet Union orchestrated by Joseph Stalin from 1936 to 1938...
, most of them were executed. Their mass grave is located near the Zolonyi Gora's former gold mine, and today bears a small memorial.

During the Soviet industrialization of the 1930s, Chelyabinsk experienced rapid growth. Several industrial establishments, including the Chelyabinsk Tractor Plant
Chelyabinsk Tractor Plant
Chelyabinsk Tractor Plant also known as CTZ-Uraltrak is a tractor plant in the Russian city of Chelyabinsk.-History:The plant was founded in 1933; the first product was a 60 hp tracked tractor С-60 fueled by petroleum ether . In 1937 the factory produced its first diesel-powered vehicle C-65...
and the Chelyabinsk Metallurgical Plant, were built at this time. During World War II, Joseph Stalin
Joseph Stalin
Joseph Vissarionovich Stalin was the Premier of the Soviet Union from 6 May 1941 to 5 March 1953. He was among the Bolshevik revolutionaries who brought about the October Revolution and had held the position of first General Secretary of the Communist Party of the Soviet Union's Central Committee...
decided to move a large part of Soviet factory production to places out of the way of the advancing German armies in late 1941. This brought new industries and thousands of workers to Chelyabinsk—still essentially a small city. Several enormous facilities for the production of T-34
T-34
The T-34 was a Soviet medium tank produced from 1940 to 1958. Although its armour and armament were surpassed by later tanks of the era, it has been often credited as the most effective, efficient and influential design of World War II...
tanks and Katyusha rocket launchers existed in Chelyabinsk, which became known as "Tankograd" (Tank City). Chelyabinsk was essentially built from scratch during this time. A small town existed before this, signs of which can be found in the centre of the city. The S.M. Kirov Factory no. 185 moved here from Leningrad
Leningrad
Leningrad is the former name of Saint Petersburg, Russia.Leningrad may also refer to:- Places :* Leningrad Oblast, a federal subject of Russia, around Saint Petersburg* Leningrad, Tajikistan, capital of Muminobod district in Khatlon Province...
to produce heavy tanks — it was transferred to Omsk
Omsk
-History:The wooden fort of Omsk was erected in 1716 to protect the expanding Russian frontier along the Ishim and the Irtysh rivers against the Kyrgyz nomads of the Steppes...
after 1962.

Chelyabinsk has had a long association (since the 1940s) with top-secret nuclear research, though this is more properly applicable to Chelyabinsk Oblast as a whole, as nuclear facilities such as Chelyabinsk-70 (Snezhinsk
Snezhinsk
Snezhinsk is a closed town in Chelyabinsk Oblast, Russia. Population: It was founded in 1957, and was known as Chelyabinsk-70 until 1991...
) are, or were, located far outside the city. A serious nuclear accident occurred in 1957 at the Mayak
Mayak
Mayak Production Association refers to an industrial complex that is one of the biggest nuclear facilities in the Russian Federation. It housed plutonium production reactors and a reprocessing plant...
nuclear fuel reprocessing plant, 150 km north-west of the city, which caused deaths in Chelyabinsk Oblast but not in the city. The province was closed to all foreigners until 1992.

Chelyabinsk is one of the major industrial
Industry
Industry refers to the production of an economic good or service within an economy.-Industrial sectors:There are four key industrial economic sectors: the primary sector, largely raw material extraction industries such as mining and farming; the secondary sector, involving refining, construction,...
centers of Russia. Heavy industry predominates, especially metallurgy
Metallurgy
Metallurgy is a domain of materials science that studies the physical and chemical behavior of metallic elements, their intermetallic compounds, and their mixtures, which are called alloys. It is also the technology of metals: the way in which science is applied to their practical use...
and military machinery, notably the Chelyabinsk Metallurgical Combinate (CMK, ChMK), Chelyabinsk Tractor Plant
Chelyabinsk Tractor Plant
Chelyabinsk Tractor Plant also known as CTZ-Uraltrak is a tractor plant in the Russian city of Chelyabinsk.-History:The plant was founded in 1933; the first product was a 60 hp tracked tractor С-60 fueled by petroleum ether . In 1937 the factory produced its first diesel-powered vehicle C-65...
(CTZ, ChTZ), Chelyabinsk Electrode plant (CHEZ), Chelyabinsk Tube Rolling Plant
Chelyabinsk Tube Rolling Plant
Chelyabinsk Tube Rolling Plant manufactures every kind of steel pipe, including pipes used for the construction of petroleum, natural gas and water pipelines; and pipes used in manufacturing processes. It accounts for 11% of Russia's steel pipe output...
(ChTPZ) and Chelyabinsk Forge-and-Press Plant
Chelyabinsk Forge-and-Press Plant
OAO Chelyabinsk Forge-and-Press Plant is a machine building and automobile component manufacturing company based in Chelyabinsk, Russia.-Overview:...
(ChKPZ).

Chelyabinsk also has several electronics
Electronics
Electronics is the branch of science, engineering and technology that deals with electrical circuits involving active electrical components such as vacuum tubes, transistors, diodes and integrated circuits, and associated passive interconnection technologies...
plants, including Metran, Polet and Zavod Electromashina, that serve both military and civil needs. 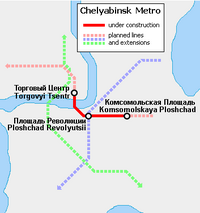 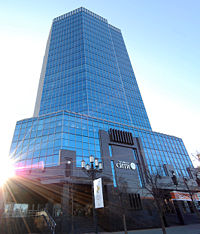 Chelyabinsk started construction of a 3-line subway network in early 1980s. It is proceeding slowly using the New Austrian Tunneling method. Pending financing, the opening of the first section is scheduled for 2017.


Ice hockey
Ice hockey
Ice hockey, often referred to as hockey, is a team sport played on ice, in which skaters use wooden or composite sticks to shoot a hard rubber puck into their opponent's net. The game is played between two teams of six players each. Five members of each team skate up and down the ice trying to take...


Cycling
Cycling
Cycling, also called bicycling or biking, is the use of bicycles for transport, recreation, or for sport. Persons engaged in cycling are cyclists or bicyclists...

Chelyabinsk is twinned
Town twinning
Twin towns and sister cities are two of many terms used to describe the cooperative agreements between towns, cities, and even counties in geographically and politically distinct areas to promote cultural and commercial ties.- Terminology :...
with: Changchun
Changchun
Changchun is the capital and largest city of Jilin province, located in the northeast of the People's Republic of China, in the center of the Songliao Plain. It is administered as a sub-provincial city with a population of 7,677,089 at the 2010 census under its jurisdiction, including counties and...
, China
China
Chinese civilization may refer to:* China for more general discussion of the country.* Chinese culture* Greater China, the transnational community of ethnic Chinese.* History of China* Sinosphere, the area historically affected by Chinese culture...
Columbia, South Carolina
Columbia, South Carolina
Columbia is the state capital and largest city in the U.S. state of South Carolina. The population was 129,272 according to the 2010 census. Columbia is the county seat of Richland County, but a portion of the city extends into neighboring Lexington County. The city is the center of a metropolitan...
, United States
United States
The United States of America is a federal constitutional republic comprising fifty states and a federal district...
Nottinghamshire
Nottinghamshire
Nottinghamshire is a county in the East Midlands of England, bordering South Yorkshire to the north-west, Lincolnshire to the east, Leicestershire to the south, and Derbyshire to the west...
, United Kingdom
United Kingdom
The United Kingdom of Great Britain and Northern IrelandIn the United Kingdom and Dependencies, other languages have been officially recognised as legitimate autochthonous languages under the European Charter for Regional or Minority Languages...
Ramla
Ramla
Ramla , is a city in central Israel. The city is predominantly Jewish with a significant Arab minority. Ramla was founded circa 705–715 AD by the Umayyad Caliph Suleiman ibn Abed al-Malik after the Arab conquest of the region...
, Israel
Israel
The State of Israel is a parliamentary republic located in the Middle East, along the eastern shore of the Mediterranean Sea...
Ürümqi
Ürümqi
Ürümqi , formerly Tihwa , is the capital of Xinjiang Uyghur Autonomous Region of the People's Republic of China, in the northwest of the country....
, China.