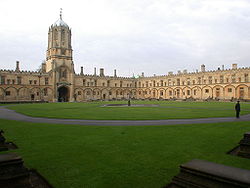 The Great Quadrangle, more popularly known as Tom Quad, is one of the quadrangles of Christ Church, Oxford
Christ Church, Oxford
Christ Church or house of Christ, and thus sometimes known as The House), is one of the largest constituent colleges of the University of Oxford in England...
, England
England
England is a country that is part of the United Kingdom. It shares land borders with Scotland to the north and Wales to the west; the Irish Sea is to the north west, the Celtic Sea to the south west, with the North Sea to the east and the English Channel to the south separating it from continental...
. It is the largest college quad
Quadrangle (architecture)
In architecture, a quadrangle is a space or courtyard, usually rectangular in plan, the sides of which are entirely or mainly occupied by parts of a large building. The word is probably most closely associated with college or university campus architecture, but quadrangles may be found in other...
in Oxford
Oxford
The city of Oxford is the county town of Oxfordshire, England. The city, made prominent by its medieval university, has a population of just under 165,000, with 153,900 living within the district boundary. It lies about 50 miles north-west of London. The rivers Cherwell and Thames run through...
, measuring 264 by 261 feet. Although it was begun by Cardinal Wolsey, he was unable to complete it. Wolsey planned that it would actually be a cloister
Cloister
A cloister is a rectangular open space surrounded by covered walks or open galleries, with open arcades on the inner side, running along the walls of buildings and forming a quadrangle or garth...
, and the supports required for this can be seen at short intervals around the quadrangle. The quad was finished when John Fell
John Fell (clergyman)
John Fell was an English churchman and influential academic. He served as Dean of Christ Church, Oxford, and later concomitantly as Bishop of Oxford.-Education:...
was Dean. The funds for the building of Tom Quad were found from the suppression of three Norbertine abbeys. It is dominated to the west by Tom Tower
Tom Tower
Tom Tower is a bell tower in Oxford, England, named for its bell, Great Tom. It is over Tom Gate, on St Aldates, the main entrance of Christ Church, Oxford, which leads into Tom Quad. This square tower with an octagonal lantern and facetted ogee dome was designed by Christopher Wren and built 1681–82...
, designed by Sir Christopher Wren. On the east side is the entrance to Christ Church Cathedral
Christ Church Cathedral, Oxford
Christ Church Cathedral is the cathedral of the diocese of Oxford, which consists of the counties of Oxfordshire, Buckinghamshire and Berkshire. It is also, uniquely, the chapel of Christ Church, a college of the University of Oxford.-History:...
and at the south-east corner is the entrance to the college dining hall. The north contains the homes of the canons
Canon (priest)
A canon is a priest or minister who is a member of certain bodies of the Christian clergy subject to an ecclesiastical rule ....
of Christ Church, and much of the east side is taken up with the Deanery
Deanery
A Deanery is an ecclesiastical entity in both the Roman Catholic Church and the Church of England. A deanery is either the jurisdiction or residence of a Dean.- Catholic usage :...
, in which the Dean of the college lives. On the north-east side, the quad leads, via Kilcannon, to Peckwater Quadrangle
Peckwater Quadrangle
The Peckwater Quadrangle is one of the quadrangles of Christ Church, Oxford, England. It is on the site of a medieval inn, which was run by the Peckwater family and given to St Frideswide's Priory in 1246. The buildings, including the Library, date from the eighteenth century. They are built in...
and the college library. In the north-west part of the quad is the Junior Common Room ("JCR"). Parts of the quad are still lived in by undergraduates, including the staircase above the Porter's lodge, known as "Bachelors' Row", to the left of the quadrangle when entered via Tom Gate. Bachelors' Row is only inhabited by first year male undergraduates.

In the centre of the quad, there is an ornamental pond with a statue of Mercury
Mercury (mythology)
Mercury was a messenger who wore winged sandals, and a god of trade, the son of Maia Maiestas and Jupiter in Roman mythology. His name is related to the Latin word merx , mercari , and merces...
. In the past, it was traditional for "hearties
Hearties
Hearties was a term used for athletic students at the University of Oxford and elsewhere, especially in the 19th and early 20th century. The term is often used in contrast to the less athletic "aesthetes"....
" (sporty students) to throw "aesthetes" (more artistic students) into this pond. Currently, entrance to Mercury carries a heavy fine for undergraduates. The pond also contains a large Koi
Koi
or more specifically , are ornamental varieties of domesticated common carp that are kept for decorative purposes in outdoor koi ponds or water gardens....
carp apparently worth a large amount of money and donated by the Empress of Japan. The base of the fountain was designed by Sir Edwin Lutyens
Edwin Lutyens
Sir Edwin Landseer Lutyens, OM, KCIE, PRA, FRIBA was a British architect who is known for imaginatively adapting traditional architectural styles to the requirements of his era...
.