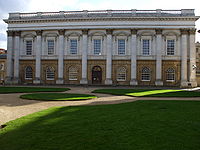 Christ Church Library is a Georgian building
Georgian architecture
Georgian architecture is the name given in most English-speaking countries to the set of architectural styles current between 1720 and 1840. It is eponymous for the first four British monarchs of the House of Hanover—George I of Great Britain, George II of Great Britain, George III of the United...
which forms the south side of Peckwater Quadrangle
Peckwater Quadrangle
The Peckwater Quadrangle is one of the quadrangles of Christ Church, Oxford, England. It is on the site of a medieval inn, which was run by the Peckwater family and given to St Frideswide's Priory in 1246. The buildings, including the Library, date from the eighteenth century. They are built in...
in Christ Church, Oxford
Christ Church, Oxford
Christ Church or house of Christ, and thus sometimes known as The House), is one of the largest constituent colleges of the University of Oxford in England...
, England. It houses the college's modern lending library
Lending library
A lending library is a library from which books are lent out. The earliest reference to or use of the term "lending library" yet located in English correspondence dates from ca. 1586; C'Tess Pembroke Ps. CXII. v, "He is .....
and early printed books on two floors.

The first library at Christ Church was established in 1562 in what had been the refectory of St Frideswide's Priory. The books, of which around 140 remain in the library, were originally chained
Chained library
A chained library is a library where the books are attached to their bookcase by a chain, which is sufficiently long to allow the books to be taken from their shelves and read, but not removed from the library itself...
to wooden lecterns.

A new library was designed in the eighteenth century, with the intention of attracting aristocratic students to the college by equalling the great classical library buildings of Trinity College, Cambridge
Wren Library, Cambridge
The Wren Library is the library of Trinity College in Cambridge. It was designed by Christopher Wren in 1676 and completed in 1695.The library is a single large room built over an open colonnade on the ground floor of Nevile's Court...
and Trinity College, Dublin
Trinity College, Dublin
Trinity College, Dublin , formally known as the College of the Holy and Undivided Trinity of Queen Elizabeth near Dublin, was founded in 1592 by letters patent from Queen Elizabeth I as the "mother of a university", Extracts from Letters Patent of Elizabeth I, 1592: "...we...found and...
. The most likely candidate for the architect is Dr George Clarke
George Clarke
George Clarke , the son of Sir William Clarke, enrolled at Brasenose College, Oxford in 1676. He was elected a Fellow of All Souls College, Oxford in 1680. He became Judge Advocate to the Army and was William III of England's Secretary at War from 1690 to 1704...
of All Souls; the master mason was William Townsend or Townesend. Building work started in 1717 and was only completed in 1772.

The books were housed on the first floor to avoid damp and flooding, while the ground floor was designed as an open loggia
Loggia
Loggia is the name given to an architectural feature, originally of Minoan design. They are often a gallery or corridor at ground level, sometimes higher, on the facade of a building and open to the air on one side, where it is supported by columns or pierced openings in the wall...
. However, a bequest of paintings from General John Guise during the protracted construction of the library led to the enclosure of the ground floor as a picture gallery
Christ Church Picture Gallery
Christ Church Picture Gallery is an art museum at Christ Church, one of the colleges of Oxford University in England. The gallery holds an important collection of about 300 Old Master paintings and nearly 2,000 drawings. It is one of the most important private collections in the United Kingdom...
(since moved to a separate, modernist, building). 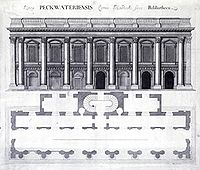 The collections incorporate substantial bequests of books from, amongst others, Robert Burton
Robert Burton (scholar)
Robert Burton was an English scholar at Oxford University, best known for the classic The Anatomy of Melancholy. He was also the incumbent of St Thomas the Martyr, Oxford, and of Segrave in Leicestershire.-Life:...
; Henry Aldrich
Henry Aldrich
Henry Aldrich was an English theologian and philosopher.-Life:Aldrich was educated at Westminster School under Dr Richard Busby. In 1662, he entered Christ Church, Oxford, and in 1689 was made Dean in succession to the Roman Catholic John Massey, who had fled to the Continent. In 1692, he...
, Dean of Christ Church; William Stratford, a canon of the cathedral; William Wake
William Wake
William Wake was a priest in the Church of England and Archbishop of Canterbury from 1716 until his death in 1737.-Life:...
, Archbishop of Canterbury
Archbishop of Canterbury
The Archbishop of Canterbury is the senior bishop and principal leader of the Church of England, the symbolic head of the worldwide Anglican Communion, and the diocesan bishop of the Diocese of Canterbury. In his role as head of the Anglican Communion, the archbishop leads the third largest group...
; and Charles Boyle, 4th Earl of Orrery
Charles Boyle, 4th Earl of Orrery
Charles Boyle, 4th Earl of Orrery KT PC FRS was an English nobleman, statesman and patron of the sciences....
.

Christ Church Library contains perhaps the largest collection of early printed books in Oxford outside the Bodleian Library
Bodleian Library
The Bodleian Library , the main research library of the University of Oxford, is one of the oldest libraries in Europe, and in Britain is second in size only to the British Library...
. The library was described in 1946 as 'a heterogeneous collection of about 100,000 works' and this is the figure which has generally been quoted since. For comparison, the modern collection holds around 72,000 books .