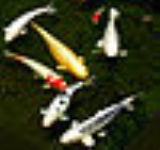 Overview
or more specifically , are ornamental varieties of domesticated common carp
Common carp
The Common carp is a widespread freshwater fish of eutrophic waters in lakes and large rivers in Europe and Asia. The wild populations are considered vulnerable to extinction, but the species has also been domesticated and introduced into environments worldwide, and is often considered an invasive...
(Cyprinus carpio) that are kept for decorative purposes in outdoor koi pond
Koi pond
Koi ponds are ponds used for holding koi, usually as part of a landscape. Koi ponds can be designed specifically to promote health and growth of the Nishkigoi or Japanese Ornamental Carp....
s or water gardens.

Koi varieties are distinguished by coloration, patterning, and scalation. Some of the major colors are white, black, red, yellow, blue, and cream. The most popular category of koi is the Gosanke, which is made up of the Kohaku, Taisho Sanshoku, and Showa Sanshoku varieties.
Carp
Carp
Carp are various species of oily freshwater fish of the family Cyprinidae, a very large group of fish native to Europe and Asia. The cypriniformes are traditionally grouped with the Characiformes, Siluriformes and Gymnotiformes to create the superorder Ostariophysi, since these groups have certain...
are a large group of fish originally found in Central Europe and Asia.

What are the various Koi based on colours?

Where are the roots of the Koi?

What family does the Koi belong to?

Where were they domestically reared?

What is the symbolism behind the Koi?
More
x