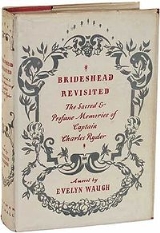 Overview
Brideshead Revisited, The Sacred & Profane Memories of Captain Charles Ryder is a novel
Novel
A novel is a book of long narrative in literary prose. The genre has historical roots both in the fields of the medieval and early modern romance and in the tradition of the novella. The latter supplied the present generic term in the late 18th century....
by English writer Evelyn Waugh
Evelyn Waugh
Arthur Evelyn St. John Waugh , known as Evelyn Waugh, was an English writer of novels, travel books and biographies. He was also a prolific journalist and reviewer...
, first published in 1945. Waugh wrote that the novel "deals with what is theologically termed 'the operation of Grace', that is to say, the unmerited and unilateral act of love by which God continually calls souls to Himself". This is achieved by an examination of the Roman Catholic aristocratic
Aristocracy
Aristocracy , is a form of government in which a few elite citizens rule. The term derives from the Greek aristokratia, meaning "rule of the best". In origin in Ancient Greece, it was conceived of as rule by the best qualified citizens, and contrasted with monarchy...
Marchmain family, as seen by the narrator, Charles Ryder.