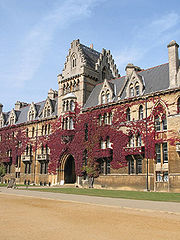 The Meadow Building is part of Christ Church, Oxford
Christ Church, Oxford
Christ Church or house of Christ, and thus sometimes known as The House), is one of the largest constituent colleges of the University of Oxford in England...
, England
England
England is a country that is part of the United Kingdom. It shares land borders with Scotland to the north and Wales to the west; the Irish Sea is to the north west, the Celtic Sea to the south west, with the North Sea to the east and the English Channel to the south separating it from continental...
, looking out onto Christ Church Meadow. It was built in 1863 to the designs of Sir Thomas Deane
Thomas Deane
Sir Thomas Deane was an Irish architect. He was the father of Sir Thomas Newenham Deane, and grandfather of Sir Thomas Manly Deane, who were also architects.-Life:...
in the Venetian
Venice
Venice is a city in northern Italy which is renowned for the beauty of its setting, its architecture and its artworks. It is the capital of the Veneto region...
style (favoured by the famous Christ Church art historian John Ruskin
John Ruskin
John Ruskin was the leading English art critic of the Victorian era, also an art patron, draughtsman, watercolourist, a prominent social thinker and philanthropist. He wrote on subjects ranging from geology to architecture, myth to ornithology, literature to education, and botany to political...
). Single rooms in the Meadow Building look out over either the college or the Christ Church Meadow, although originally, college undergraduates would be given a suite of rooms with views overlooking both sides. Recent building work has converted most of these rooms to ensuite while leaving one staircase, which is primarily non-residential, as was.

When it was first built, the relative distance of the Meadow Building from the more fashionable Peckwater
Peckwater Quadrangle
The Peckwater Quadrangle is one of the quadrangles of Christ Church, Oxford, England. It is on the site of a medieval inn, which was run by the Peckwater family and given to St Frideswide's Priory in 1246. The buildings, including the Library, date from the eighteenth century. They are built in...
and Canterbury Quads meant that it was considered the least desirable accommodation in college.