Encyclopedia
Tom Tower is a bell tower
Bell tower
A bell tower is a tower which contains one or more bells, or which is designed to hold bells, even if it has none. In the European tradition, such a tower most commonly serves as part of a church and contains church bells. When attached to a city hall or other civic building, especially in...
in Oxford
Oxford
The city of Oxford is the county town of Oxfordshire, England. The city, made prominent by its medieval university, has a population of just under 165,000, with 153,900 living within the district boundary. It lies about 50 miles north-west of London. The rivers Cherwell and Thames run through...
, England
England
England is a country that is part of the United Kingdom. It shares land borders with Scotland to the north and Wales to the west; the Irish Sea is to the north west, the Celtic Sea to the south west, with the North Sea to the east and the English Channel to the south separating it from continental...
, named for its bell, Great Tom. It is over Tom Gate, on St Aldates, the main entrance of Christ Church, Oxford
Christ Church, Oxford
Christ Church or house of Christ, and thus sometimes known as The House), is one of the largest constituent colleges of the University of Oxford in England...
, which leads into Tom Quad
Tom Quad
The Great Quadrangle, more popularly known as Tom Quad, is one of the quadrangles of Christ Church, Oxford, England. It is the largest college quad in Oxford, measuring 264 by 261 feet. Although it was begun by Cardinal Wolsey, he was unable to complete it...
. This square tower with an octagonal lantern and facetted ogee dome was designed by Christopher Wren
Christopher Wren
Sir Christopher Wren FRS is one of the most highly acclaimed English architects in history.He used to be accorded responsibility for rebuilding 51 churches in the City of London after the Great Fire in 1666, including his masterpiece, St. Paul's Cathedral, on Ludgate Hill, completed in 1710...
and built 1681–82. The strength of Oxford architectural tradition and Christ Church's connection to its founder, Henry VIII
Henry VIII of England
Henry VIII was King of England from 21 April 1509 until his death. He was Lord, and later King, of Ireland, as well as continuing the nominal claim by the English monarchs to the Kingdom of France...
, motivated the decision to complete the gatehouse structure, left unfinished by Cardinal Wolsey at the date of his fall from power in 1529, and which had remained roofless since. Wren made a case for working in a late Gothic style — that it "ought to be Gothick to agree with the Founders worke" — a style that had not been seen in a prominent building for a hundred and fifty years, making Tom Tower a lonely precursor of the Gothic Revival that got underway in the mid-18th century. Wren never came to supervise the structure as it was being erected by the stonemason he had recommended, Christopher Kempster
Christopher Kempster
Christopher Kempster was an English master stonemason and architect who trained with Sir Christopher Wren, working on St Paul's Cathedral.Kempster was from Burford in Oxfordshire, England....
, of Burford
Burford
Burford is a small town on the River Windrush in the Cotswold hills in west Oxfordshire, England, about west of Oxford, southeast of Cheltenham and only from the Gloucestershire boundary...
.

In 1732-34, when William Kent
William Kent
William Kent , born in Bridlington, Yorkshire, was an eminent English architect, landscape architect and furniture designer of the early 18th century.He was baptised as William Cant.-Education:...
was called upon to make sympathetic reconstruction of the east range of Clock Court in Wolsey's Tudor Hampton Court Palace
Hampton Court Palace
Hampton Court Palace is a royal palace in the London Borough of Richmond upon Thames, Greater London; it has not been inhabited by the British royal family since the 18th century. The palace is located south west of Charing Cross and upstream of Central London on the River Thames...
, he naturally turned to the precedent of Tom Tower for his "central ogee dome with its coronet of pilaster-like gothick finials" The tower of Dunster House
Dunster House
Dunster House, built in 1930, is one of the first two Harvard University dormitories constructed under President Abbott Lawrence Lowell's House Plan, and one of the seven Houses given to Harvard by Edward Harkness. In the early days, room rents varied based on the floor and the size of the room...
at Harvard University
Harvard University
Harvard University is a private Ivy League university located in Cambridge, Massachusetts, United States, established in 1636 by the Massachusetts legislature. Harvard is the oldest institution of higher learning in the United States and the first corporation chartered in the country...
is a direct imitation of Tom Tower, though its details have been Georgianised, and stones from Christ Church
Christ Church, Oxford
Christ Church or house of Christ, and thus sometimes known as The House), is one of the largest constituent colleges of the University of Oxford in England...
are installed in one of the house's main entryways. It has been pointed out by many Pembroke College
Pembroke College, Oxford
Pembroke College is one of the constituent colleges of the University of Oxford in England, located in Pembroke Square. As of 2009, Pembroke had an estimated financial endowment of £44.9 million.-History:...
students that the best view of Tom Tower is from their porters' lodge, off St Aldates. 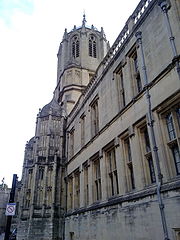 In 1678–1679, Richard Keene of Woodstock
Woodstock, Oxfordshire
Woodstock is a small town northwest of Oxford in Oxfordshire, England. It is the location of Blenheim Palace, a UNESCO World Heritage Site.Winston Churchill was born in Blenheim Palace in 1874 and is buried in the nearby village of Bladon....
tried three times to recast the bell, in the process increasing its weight from two to over six tons, but it was not until a final recasting in 1680 — by Christopher Hodson, a bell-founder from London
London
London is the capital city of :England and the :United Kingdom, the largest metropolitan area in the United Kingdom, and the largest urban zone in the European Union by most measures. Located on the River Thames, London has been a major settlement for two millennia, its history going back to its...
— that success was achieved, and the resulting bell, Great Tom, was hung in the newly completed Tom Tower. It was rehung in May 1953. There is an inscription on the bell in Latin, which translated reads:

"Great Thomas the door closer of Oxford renovated April 8, 1680 in the reign of Charles II
Charles II of England
Charles II was monarch of the three kingdoms of England, Scotland, and Ireland.Charles II's father, King Charles I, was executed at Whitehall on 30 January 1649, at the climax of the English Civil War...
. Deacon John, the Bishop of Oxford and sub-Deacon give thanks to the knowledge of Henry Smith and the care and workmanship of Christopher Hodson".

Great Tom is still sounded 101 times every night, which signifies the 100 original scholars of the college plus one (added in 1663). It is rung at 21:05 current UK time, which corresponds to 21:00 in what used to be "Oxford time" (local mean time for Oxford, noon in Oxford always occurring five minutes later than noon in Greenwich), and was at one time the signal for all the Oxford colleges to lock their gates. The bell is only rung by swinging on very special occasions. The bell is the subject of a number of Oxfordshire
Oxfordshire
Oxfordshire is a county in the South East region of England, bordering on Warwickshire and Northamptonshire , Buckinghamshire , Berkshire , Wiltshire and Gloucestershire ....
Morris tunes
Morris dance
Morris dance is a form of English folk dance usually accompanied by music. It is based on rhythmic stepping and the execution of choreographed figures by a group of dancers. Implements such as sticks, swords, handkerchiefs and bells may also be wielded by the dancers...
and round
Round (music)
A round is a musical composition in which two or more voices sing exactly the same melody , but with each voice beginning at different times so that different parts of the melody coincide in the different voices, but nevertheless fit harmoniously together...
s, including "Old Tom of Oxford" (from Bampton
Bampton, Oxfordshire
Bampton, also called Bampton-in-the-Bush, is a village and civil parish in the Thames Valley about southwest of Witney in Oxfordshire. The parish includes the hamlet of Weald....
), and the rounds "Great Tom Is Cast" and "Bonny Christ Church Bells", which were composed by the Dean of Christ Church, Henry Aldrich
Henry Aldrich
Henry Aldrich was an English theologian and philosopher.-Life:Aldrich was educated at Westminster School under Dr Richard Busby. In 1662, he entered Christ Church, Oxford, and in 1689 was made Dean in succession to the Roman Catholic John Massey, who had fled to the Continent. In 1692, he...
(1647–1710). However, "Great Tom Is Cast" is also credited to Matthew White written in 1667. The two versions are identical except for two notes. Considering the dates, it is likely that White is the real author of the piece. 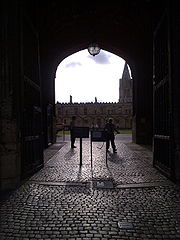