Encyclopedia
The Tisza or Tisa is one of the main rivers of Central Europe
Central Europe
Central Europe or alternatively Middle Europe is a region of the European continent lying between the variously defined areas of Eastern and Western Europe...
. It rises in Ukraine
Ukraine
Ukraine is a country in Eastern Europe. It has an area of 603,628 km², making it the second largest contiguous country on the European continent, after Russia...
, and is formed near Rakhiv
Rakhiv
Rakhiv is a city located in the Zakarpattia Oblast in western Ukraine. It is the administrative center of the Rakhiv Raion .- Demographics :As of 2001, the city population was 15,241 inhabitants which included: * 83.8% Ukrainians...
by the junction of headwaters White Tisa, whose source is in the Chornohora mountains
Chornohora
Chornohora is the highest mountain range in Western Ukraine in the Eastern Beskids and the Ukrainian Carpathians group, which in turn is part of the Outer Eastern Carpathians....
and Black Tisa, which springs in the Gorgany
Gorgany
Gorgany is a mountain range in Western Ukraine in Outer Eastern Carpathians, adjacent to Chornohora range. The highest peak of Gorgany is Syvulia with the other high peaks including Ihrovyshche, Vysoka and Grofa. The mountains are made of flysch rock, mostly sandstone, which create typical for...
range. It flows roughly along the Romania
Romania
Romania is a country located at the crossroads of Central and Southeastern Europe, on the Lower Danube, within and outside the Carpathian arch, bordering on the Black Sea...
n border and enters Hungary
Hungary
Hungary , officially the Republic of Hungary , is a landlocked country in Central Europe. It is situated in the Carpathian Basin and is bordered by Slovakia to the north, Ukraine and Romania to the east, Serbia and Croatia to the south, Slovenia to the southwest and Austria to the west. The...
at Tiszabecs
Tiszabecs
Tiszabecs is a village in Szabolcs-Szatmár-Bereg county, in the Northern Great Plain region of eastern Hungary.-Geography:It covers an area of and has a population of 1055 people ....
; after passing through Hungary it flows into the Danube
Danube
The Danube is a river in the Central Europe and the Europe's second longest river after the Volga. It is classified as an international waterway....
in north Serbia
Serbia
Serbia , officially the Republic of Serbia , is a landlocked country located at the crossroads of Central and Southeast Europe, covering the southern part of the Carpathian basin and the central part of the Balkans...
(Vojvodina
Vojvodina
Vojvodina, officially called Autonomous Province of Vojvodina is an autonomous province of Serbia. Its capital and largest city is Novi Sad...
). There, it forms the boundary between the regions of Bačka
Backa
Bačka is a geographical area within the Pannonian plain bordered by the river Danube to the west and south, and by the river Tisza to the east of which confluence is located near Titel...
and Banat
Banat
The Banat is a geographical and historical region in Central Europe currently divided between three countries: the eastern part lies in western Romania , the western part in northeastern Serbia , and a small...
. The river also forms short portions of the border between Hungary and Ukraine and between Hungary and Serbia.

The river was known as the Tisia in antiquity, and Latin
Latin
Latin is an Italic language originally spoken in Latium and Ancient Rome. It, along with most European languages, is a descendant of the ancient Proto-Indo-European language. Although it is considered a dead language, a number of scholars and members of the Christian clergy speak it fluently, and...
names for it included Tissus, Tisia, Pathissus (Pliny
Pliny the Elder
Gaius Plinius Secundus , better known as Pliny the Elder, was a Roman author, naturalist, and natural philosopher, as well as naval and army commander of the early Roman Empire, and personal friend of the emperor Vespasian...
, Naturalis historia, 4.25). In the Serbian-
Serbian language
Serbian is a form of Serbo-Croatian, a South Slavic language, spoken by Serbs in Serbia, Bosnia and Herzegovina, Montenegro, Croatia and neighbouring countries....
and Slovak language
Slovak language
Slovak , is an Indo-European language that belongs to the West Slavic languages .Slovak is the official language of Slovakia, where it is spoken by 5 million people...
s, it is called Tisa. It may be referred to as the Theiss in older English references, after the German name for the river.

The length of the Tisza in Hungary used to be 1419 km. It flowed through the Great Hungarian Plain
Great Hungarian Plain
The Great Hungarian Plain is a plain occupying the southern and eastern part of Hungary, some parts of the Eastern Slovak Lowland, southwestern Ukraine, the Transcarpathian Lowland , western Romania , northern Serbia , and eastern Croatia...
, which is one of the largest flat areas in central Europe. Since plain
Plain
In geography, a plain is land with relatively low relief, that is flat or gently rolling. Prairies and steppes are types of plains, and the archetype for a plain is often thought of as a grassland, but plains in their natural state may also be covered in shrublands, woodland and forest, or...
s can cause a river to flow very slowly, the Tisza used to follow a path with many curves and turns, which led to many large floods in the area.

After several small-scale attempts, István Széchenyi
István Széchenyi
Széchenyi committed suicide by a shot to his head on April 8, 1860. All Hungary mourned his death. The Academy was in official mourning, along with the most prominent persons of the leading political and cultural associations...
organised the "regulation of the Tisza" which started on August 27, 1846 and substantially ended in 1880. The new length of the river in Hungary was 966 km, with 589 km of "dead channels" and 136 km of new riverbed.

The resultant length of the flood-protected river comprises 2,940 km (out of 4,220 km of all Hungarian protected rivers) which forms one of the largest flood protection systems in Europe; larger than the Netherlands
Netherlands
The Netherlands is a constituent country of the Kingdom of the Netherlands, located mainly in North-West Europe and with several islands in the Caribbean. Mainland Netherlands borders the North Sea to the north and west, Belgium to the south, and Germany to the east, and shares maritime borders...
' 1,500 km, the Po River
Po River
The Po |Ligurian]]: Bodincus or Bodencus) is a river that flows either or – considering the length of the Maira, a right bank tributary – eastward across northern Italy, from a spring seeping from a stony hillside at Pian del Re, a flat place at the head of the Val Po under the northwest face...
's 1,400 km, or the Loire Valley
Loire Valley
The Loire Valley , spanning , is located in the middle stretch of the Loire River in central France. Its area comprises approximately . It is referred to as the Cradle of the French Language, and the Garden of France due to the abundance of vineyards, fruit orchards, and artichoke, asparagus, and...
's 480 km.

In the 1970s the building of the Kisköre Reservoir started with the purpose of helping to control floods as well as storing water for drought seasons. It turned out, however, that the resulting Lake Tisza
Lake Tisza
Lake Tisza , also known as Kisköre Reservoir , is the largest artificial lake in Hungary. It is located at the southeastern edge of Heves county, next to counties Borsod-Abaúj-Zemplén, Hajdú-Bihar and Jász-Nagykun-Szolnok.As part of the ongoing Tisza River flood control project, it was built in 1973...
became one of the most popular tourist destinations in Hungary, since it had similar features to Lake Balaton
Lake Balaton
Lake Balaton is a freshwater lake in the Transdanubian region of Hungary. It is the largest lake in Central Europe, and one of its foremost tourist destinations. As Hungary is landlocked , Lake Balaton is often affectionately called the "Hungarian Sea"...
at drastically cheaper prices and it was not crowded.

The Tisza is navigable over much of its course. The river opened up for international navigation only recently; before, Hungary distinguished "national rivers" and "international rivers", indicating whether non-Hungarian vessels were allowed or not. After Hungary joined the European Union
European Union
The European Union is an economic and political union of 27 independent member states which are located primarily in Europe. The EU traces its origins from the European Coal and Steel Community and the European Economic Community , formed by six countries in 1958...
, this distinction was lifted and vessels were allowed on the Tisza.

Conditions of navigation differ with the circumstances: when the river is in flood, it is often unnavigable, just as it is at times of extreme drought. (Source: NoorderSoft Waterway Database)

In early 2000, there was a sequence of serious pollution incidents originating from accidental industrial discharges in Romania. The first, in January 2000, occurred when there was a release of sludge containing cyanide
Cyanide
A cyanide is a chemical compound that contains the cyano group, -C≡N, which consists of a carbon atom triple-bonded to a nitrogen atom. Cyanides most commonly refer to salts of the anion CN−. Most cyanides are highly toxic....
from a Romanian mine and killed 2000 tons of fish. The second, from a mine pond at Baia Borsa, northern Romania, resulted in the release of 20,000 cubic metres of sludge containing zinc
Zinc
Zinc , or spelter , is a metallic chemical element; it has the symbol Zn and atomic number 30. It is the first element in group 12 of the periodic table. Zinc is, in some respects, chemically similar to magnesium, because its ion is of similar size and its only common oxidation state is +2...
, lead
Lead
Lead is a main-group element in the carbon group with the symbol Pb and atomic number 82. Lead is a soft, malleable poor metal. It is also counted as one of the heavy metals. Metallic lead has a bluish-white color after being freshly cut, but it soon tarnishes to a dull grayish color when exposed...
and copper
Copper
Copper is a chemical element with the symbol Cu and atomic number 29. It is a ductile metal with very high thermal and electrical conductivity. Pure copper is soft and malleable; an exposed surface has a reddish-orange tarnish...
occurred in early March 2000. A week later, the third spill occurred at the same mining site at Baia Borsa, staining the river black, possibly including heavy metals.

This series of incidents were described at the time as the most serious environmental disaster to hit eastern Europe since the Chernobyl disaster
Chernobyl disaster
The Chernobyl disaster was a nuclear accident that occurred on 26 April 1986 at the Chernobyl Nuclear Power Plant in Ukraine , which was under the direct jurisdiction of the central authorities in Moscow...
. Use of river water for any purpose was temporarily banned and the Hungarian government pressed the Romanians and the European Union
European Union
The European Union is an economic and political union of 27 independent member states which are located primarily in Europe. The EU traces its origins from the European Coal and Steel Community and the European Economic Community , formed by six countries in 1958...
to close all installations that could lead to further pollution.

Examination of river sediments indicates that pollution incidents from mines have occurred for over a century. 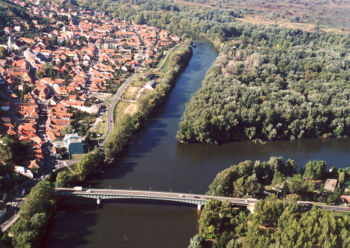