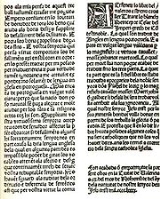 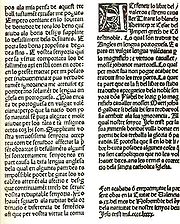 Tirant lo Blanch or Tirant lo Blanc (tiˈɾand lo ˈβlaŋk) is a romance
Romance (genre)
As a literary genre of high culture, romance or chivalric romance is a style of heroic prose and verse narrative that was popular in the aristocratic circles of High Medieval and Early Modern Europe. They were fantastic stories about marvel-filled adventures, often of a knight errant portrayed as...
written by the Valencian
Kingdom of Valencia
The Kingdom of Valencia , located in the eastern shore of the Iberian Peninsula, was one of the component realms of the Crown of Aragon. When the Crown of Aragon merged by dynastic union with the Crown of Castile to form the Kingdom of Spain, the Kingdom of Valencia became a component realm of the...
knight Joanot Martorell
Joanot Martorell
Joanot Martorell was a Valencian knight and the author of the novel Tirant lo Blanch, which is written in Valencian...
and published in Valencia in 1490. The title means "Tirant the White" and is the name of the main character in the romance. It is one of the best known medieval
Middle Ages
The Middle Ages is a periodization of European history from the 5th century to the 15th century. The Middle Ages follows the fall of the Western Roman Empire in 476 and precedes the Early Modern Era. It is the middle period of a three-period division of Western history: Classic, Medieval and Modern...
works of literature in Catalan
Catalan
Catalan is an inhabitant of CataloniaCatalan can also refer to:*Catalan people*Catalan language*Països Catalans, territories where Catalan language is spokenPersons with the surname Catalan:*Eugène Charles Catalan, a mathematician...
, and played an important role in the evolution of the Western
Western culture
Western culture, sometimes equated with Western civilization or European civilization, refers to cultures of European origin and is used very broadly to refer to a heritage of social norms, ethical values, traditional customs, religious beliefs, political systems, and specific artifacts and...
novel
Novel
A novel is a book of long narrative in literary prose. The genre has historical roots both in the fields of the medieval and early modern romance and in the tradition of the novella. The latter supplied the present generic term in the late 18th century....
through its influence on the author Miguel de Cervantes
Miguel de Cervantes
Miguel de Cervantes Saavedra was a Spanish novelist, poet, and playwright. His magnum opus, Don Quixote, considered the first modern novel, is a classic of Western literature, and is regarded amongst the best works of fiction ever written...
.

Tirant lo Blanch is one of the most important books of Catalan literature
Catalan literature
Catalan literature is the name conventionally used to refer to literature written in the Catalan language. The Catalan literary tradition is extensive, starting in the Middle Ages....
. Written by Joanot Martorell
Joanot Martorell
Joanot Martorell was a Valencian knight and the author of the novel Tirant lo Blanch, which is written in Valencian...
in the 15th century, the Tirant is a chivalric novel
Chivalry
Chivalry is a term related to the medieval institution of knighthood which has an aristocratic military origin of individual training and service to others. Chivalry was also the term used to refer to a group of mounted men-at-arms as well as to martial valour...
that also appears to have a strong autobiographic component. It tells the feats and adventures of Knight Tirant lo Blanch from Brittany
Brittany
Brittany is a cultural and administrative region in the north-west of France. Previously a kingdom and then a duchy, Brittany was united to the Kingdom of France in 1532 as a province. Brittany has also been referred to as Less, Lesser or Little Britain...
. At times, it parallels the life and adventures of admiral Roger de Flor
Roger de Flor
Roger de Flor , also known as Ruggero/Ruggiero da Fiore or Rutger von Blum or Ruggero Flores, was a military adventurer active in Sicily, Italy and the Byzantine Empire...
, a Templar
Knights Templar
The Poor Fellow-Soldiers of Christ and of the Temple of Solomon , commonly known as the Knights Templar, the Order of the Temple or simply as Templars, were among the most famous of the Western Christian military orders...
Knight
Knight
A knight was a member of a class of lower nobility in the High Middle Ages.By the Late Middle Ages, the rank had become associated with the ideals of chivalry, a code of conduct for the perfect courtly Christian warrior....
and participant in the last crusade, leader of the Almogavar (Valencian, Catalan and Aragonese
Aragon
Aragon is a modern autonomous community in Spain, coextensive with the medieval Kingdom of Aragon. Located in northeastern Spain, the Aragonese autonomous community comprises three provinces : Huesca, Zaragoza, and Teruel. Its capital is Zaragoza...
). This historical resemblance is also evident in the description of events occurring around Constantinople
Constantinople
Constantinople was the capital of the Roman, Eastern Roman, Byzantine, Latin, and Ottoman Empires. Throughout most of the Middle Ages, Constantinople was Europe's largest and wealthiest city.-Names:...
and the defeat of Sultan
Sultan
Sultan is a title with several historical meanings. Originally, it was an Arabic language abstract noun meaning "strength", "authority", "rulership", and "dictatorship", derived from the masdar سلطة , meaning "authority" or "power". Later, it came to be used as the title of certain rulers who...
Mehmed II
Mehmed II
Mehmed II , was Sultan of the Ottoman Empire for a short time from 1444 to September 1446, and later from...
"the conqueror," and ultimately leading to the fall of Constantinople
Fall of Constantinople
The Fall of Constantinople was the capture of the capital of the Byzantine Empire, which occurred after a siege by the Ottoman Empire, under the command of Ottoman Sultan Mehmed II, against the defending army commanded by Byzantine Emperor Constantine XI...
in 1453.

Compared to books of the same time period, it lacks the bucolic, platonic, and contemplative love commonly portrayed in the chivalric heroes. Instead the main character is full of life and sensuous love, sarcasm, and human feelings. The work is filled with down to earth descriptions of daily life, prosaic and even bitter in nature.

"They drew near Valencia (…) Above all they praised the beauty of its women and its fresh cleanliness and charming language, which only Portuguese can compete with in being sweet and pleasant."

The similarities in both works can also be appreciated in their critical and skeptical view of the unlikely and exaggerated and fantastic chivalric novels in use at the time. At the time Don Quijote was written, there was probably a Valencian, a Portuguese and a Spanish edition of the Tirant.

In the following passage from Don Quixote, the famous "scrutiny of the library" the priest and the barber throw Don Alonso Quijano's (Don Quixote) books onto the bonfire:

"God help me!" said the priest in a loud voice, "That we have here the 'Tirant lo Blanch' ! Hand it over to me, my friend, for I am telling you that I found on it a treasure of enjoyment and a gold mine of recreation. Here it is Don Kyrieleison of Montalvan, valiant knight, and his brother Thomas of Montalvan, and the knight Fonseca, and the battle the brave Tirante fought with the mastiff, and the witt of damsel Plaerdemavida (Pleasureofmylife - ed. note), and the loves and lies of the widow Reposada (Rested -ed note), and lady Emperatriz (Empress - ed note) in love with the squire Hipolito--in all truth, my friend, by right of its style this is the best book in the world: here Knights eat, sleep, and they die even doing a will, things that all the rest of books of this genre lack. Having said all this, I am telling you that he deserved to have this book written because he did not do as many silly things as to deserve to be thrown to the galleys for the rest of his life. Take the book home and read it, and then you will realize that all I told you about it is true."

Tirant lo Blanch tells the story of a medieval knight Tirant from Brittany who has a series of adventures across Europe
Europe
Europe is, by convention, one of the world's seven continents. Comprising the westernmost peninsula of Eurasia, Europe is generally 'divided' from Asia to its east by the watershed divides of the Ural and Caucasus Mountains, the Ural River, the Caspian and Black Seas, and the waterways connecting...
in his quest. He joins in knightly competitions in England
England
England is a country that is part of the United Kingdom. It shares land borders with Scotland to the north and Wales to the west; the Irish Sea is to the north west, the Celtic Sea to the south west, with the North Sea to the east and the English Channel to the south separating it from continental...
and France
France
The French Republic , The French Republic , The French Republic , (commonly known as France , is a unitary semi-presidential republic in Western Europe with several overseas territories and islands located on other continents and in the Indian, Pacific, and Atlantic oceans. Metropolitan France...
until the Emperor of the Byzantine Empire
Byzantine Empire
The Byzantine Empire was the Eastern Roman Empire during the periods of Late Antiquity and the Middle Ages, centred on the capital of Constantinople. Known simply as the Roman Empire or Romania to its inhabitants and neighbours, the Empire was the direct continuation of the Ancient Roman State...
asks him to help in the war against the Ottoman Turks
Turkic peoples
The Turkic peoples are peoples residing in northern, central and western Asia, southern Siberia and northwestern China and parts of eastern Europe. They speak languages belonging to the Turkic language family. They share, to varying degrees, certain cultural traits and historical backgrounds...
, an Islamic tribe of invaders threatening Constantinople
Constantinople
Constantinople was the capital of the Roman, Eastern Roman, Byzantine, Latin, and Ottoman Empires. Throughout most of the Middle Ages, Constantinople was Europe's largest and wealthiest city.-Names:...
, the capital and seat of the Empire. Tirant accepts and is made Megaduke
Megas Doux
The megas doux was one of the highest positions in the hierarchy of the later Byzantine Empire, denoting the commander-in-chief of the Byzantine navy. It is sometimes also given by the half-Latinizations megaduke or megadux...
of the Byzantine Empire and the captain of an army. He defeats the Turkish invaders and saves the Empire from destruction. Afterwards, he fights the Turks in many regions of the eastern Mediterranean and north Africa, but he dies just before he can marry the pretty heiress of the Byzantine Empire.