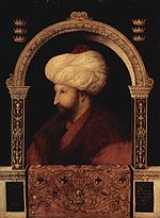 Overview
Sultan (ˈsulˈtˤɑːn; ) is a title with several historical meanings. Originally, it was an Arabic language
Arabic language
Arabic is a name applied to the descendants of the Classical Arabic language of the 6th century AD, used most prominently in the Quran, the Islamic Holy Book...
abstract noun meaning "strength", "authority", "rulership", and "dictatorship", derived from the masdar
Verbal noun
In linguistics, the verbal noun turns a verb into a noun and corresponds to the infinitive in English language usage. In English the infinitive form of the verb is formed when preceded by to, e.g...
سلطة , meaning "authority" or "power". Later, it came to be used as the title of certain rulers who claimed almost full sovereignty in practical terms (i.e. the lack of dependence on any higher ruler), without claiming the overall caliphate
Caliphate
The term caliphate, "dominion of a caliph " , refers to the first system of government established in Islam and represented the political unity of the Muslim Ummah...
, or it was used to refer to a powerful governor
Governor
A governor is a governing official, usually the executive of a non-sovereign level of government, ranking under the head of state...
of a province within the caliphate.

The dynasty
Dynasty
A dynasty is a sequence of rulers considered members of the same family. Historians traditionally consider many sovereign states' history within a framework of successive dynasties, e.g., China, Ancient Egypt and the Persian Empire...
and lands ruled by a sultan are referred to as a sultanate .
The title carries moral weight and religious authority, in the Qur'an
Qur'an
The Quran , also transliterated Qur'an, Koran, Alcoran, Qur’ān, Coran, Kuran, and al-Qur’ān, is the central religious text of Islam, which Muslims consider the verbatim word of God . It is regarded widely as the finest piece of literature in the Arabic language...
.

1218    Al-Kamil becomes Sultan of Egypt, Syria and northern Mesopotamia on the death of his father Al-Adil.

1268    The Principality of Antioch, a crusader state, falls to the Mamluk Sultan Baibars in the Battle of Antioch.

1270    The Eighth Crusade and siege of Tunis end by an agreement between Charles I of Sicily (brother to King Louis IX of France, who had died months earlier) and the sultan of Tunis.

1451    Sultan Mehmed II inherits the throne of the Ottoman Empire.

1453    Fall of Constantinople: Ottoman armies under Sultan Mehmed II Fatih capture Constantinople after a 53-day siege, ending the Byzantine Empire. Although the date of May 29, 1453 is that of the Julian Calendar, the event is commemorated in Istanbul on this day of the present Gregorian calendar.

1713    The ''Kalabalik'' or ''Tumult in Bendery'' results from the Ottoman sultan's order that his unwelcome guest, King Charles XII of Sweden, be seized.

1909    Sultan of Ottoman Empire Abdul Hamid II is overthrown, and is succeeded by his brother, Mehmed V.

1920    The national council in Turkey denounces the government of Sultan Mehmed VI and announces a temporary constitution.