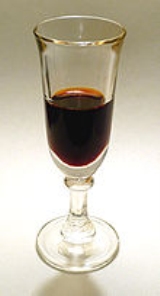 A tincture is an alcoholic extract
Extract
An extract is a substance made by extracting a part of a raw material, often by using a solvent such as ethanol or water. Extracts may be sold as tinctures or in powder form....
(e.g. of leaves or other plant material) or solution
Solution
In chemistry, a solution is a homogeneous mixture composed of only one phase. In such a mixture, a solute is dissolved in another substance, known as a solvent. The solvent does the dissolving.- Types of solutions :...
of a non-volatile
Volatility (chemistry)
In chemistry and physics, volatility is the tendency of a substance to vaporize. Volatility is directly related to a substance's vapor pressure. At a given temperature, a substance with higher vapor pressure vaporizes more readily than a substance with a lower vapor pressure.The term is primarily...
substance (e.g. of iodine
Iodine
Iodine is a chemical element with the symbol I and atomic number 53. The name is pronounced , , or . The name is from the , meaning violet or purple, due to the color of elemental iodine vapor....
, mercurochrome). To qualify as a tincture, the alcohol
Alcohol
In chemistry, an alcohol is an organic compound in which the hydroxy functional group is bound to a carbon atom. In particular, this carbon center should be saturated, having single bonds to three other atoms....
ic extract is to have an ethanol
Ethanol
Ethanol, also called ethyl alcohol, pure alcohol, grain alcohol, or drinking alcohol, is a volatile, flammable, colorless liquid. It is a psychoactive drug and one of the oldest recreational drugs. Best known as the type of alcohol found in alcoholic beverages, it is also used in thermometers, as a...
percentage of at least 40-60% (80-120 proof) (sometimes a 90% (180 proof) pure liquid is even achieved). In herbal medicine, alcoholic tinctures are often made with various concentrations of ethanol, 25% being the most common. Other concentrations include 45% and 90%. Herbal tinctures do not always use ethanol as a solvent, though this is the most frequent. Other solvents include vinegar
Vinegar
Vinegar is a liquid substance consisting mainly of acetic acid and water, the acetic acid being produced through the fermentation of ethanol by acetic acid bacteria. Commercial vinegar is produced either by fast or slow fermentation processes. Slow methods generally are used with traditional...
, glycerol
Glycerol
Glycerol is a simple polyol compound. It is a colorless, odorless, viscous liquid that is widely used in pharmaceutical formulations. Glycerol has three hydroxyl groups that are responsible for its solubility in water and its hygroscopic nature. The glycerol backbone is central to all lipids...
, ether
Ether
Ethers are a class of organic compounds that contain an ether group — an oxygen atom connected to two alkyl or aryl groups — of general formula R–O–R'. A typical example is the solvent and anesthetic diethyl ether, commonly referred to simply as "ether"...
and propylene glycol
Propylene glycol
Propylene glycol, also called 1,2-propanediol or propane-1,2-diol, is an organic compound with formula C3H8O2 or HO-CH2-CHOH-CH3...
, not all of which are used for internal consumption. However, where a raw solvent's pH factor is a sole consideration, the advantage of ethanol is that being close to neutral pH
PH
In chemistry, pH is a measure of the acidity or basicity of an aqueous solution. Pure water is said to be neutral, with a pH close to 7.0 at . Solutions with a pH less than 7 are said to be acidic and solutions with a pH greater than 7 are basic or alkaline...
, it is a good compromise as a passive used solvent of both acidic and alkaline constituents where a tincturing methodology is concerned. Glycerine, when utilized in a tincture methodology's passive (i.e. 'non-critical') manner, is a poorer solvent generally, and vinegar, being acidic, is a better solvent of alkaloids but a poorer solvent of acids, which would result in the alkaloids being more present in the preparation than otherwise. However, for people who do not imbibe alcohol for medical, religious or moral reasons, non-alcoholic (glycerite) tinctures are an alternative.

Alcohol tinctures cannot be subjected to high temperatures and are thus considered a 'non-critical' passive methodology regarding this factor. This is one of the primary reasons why glycerol, due to early Eclectic medicine
Eclectic medicine
Eclectic medicine was a branch of American medicine which made use of botanical remedies along with other substances and physical therapy practices, popular in the latter half of the 19th and first half of the 20th centuries....
studies (now for the most part outdated concerning the subject), is typically seen as inferior to alcohol, when utilized in a non-critical tincture methodology fashion (which is how Eclectic medicine researchers utilized glycerol in their tincture making studies), since it does not exhibit the extractive potential of alcohol when used in a low temperature non-critical tincturing setting. Glycerol used in a non-critical tincturing methodology, as is typically done in the herbal products industry at large for instance, will result in a weak solution, whereas if glycerol is subjected to a contemporary innovative serialized methodology currently in the industry, the extractive potential of glycerol is quite astounding. Therefore, glycerite products made using such innovative serialized extraction technologies are showing great promise, even rivaling alcohol tinctures on numerous points.

Solutions of volatile substances were called spirit
Spirit
The English word spirit has many differing meanings and connotations, most of them relating to a non-corporeal substance contrasted with the material body.The spirit of a living thing usually refers to or explains its consciousness.The notions of a person's "spirit" and "soul" often also overlap,...
s, although that name was also given to several other materials obtained by distillation
Distillation
Distillation is a method of separating mixtures based on differences in volatilities of components in a boiling liquid mixture. Distillation is a unit operation, or a physical separation process, and not a chemical reaction....
, even when they did not include alcohol.
In chemistry
Chemistry
Chemistry is the science of matter, especially its chemical reactions, but also its composition, structure and properties. Chemistry is concerned with atoms and their interactions with other atoms, and particularly with the properties of chemical bonds....
, a tincture is a solution
Solution
In chemistry, a solution is a homogeneous mixture composed of only one phase. In such a mixture, a solute is dissolved in another substance, known as a solvent. The solvent does the dissolving.- Types of solutions :...
that has alcohol
Alcohol
In chemistry, an alcohol is an organic compound in which the hydroxy functional group is bound to a carbon atom. In particular, this carbon center should be saturated, having single bonds to three other atoms....
as the solvent
Solvent
A solvent is a liquid, solid, or gas that dissolves another solid, liquid, or gaseous solute, resulting in a solution that is soluble in a certain volume of solvent at a specified temperature...
.

To make a more precise tincture, more extensive measuring can be done by combining 1 part herbs with a water-ethanol mixture of 2-10 parts, depending on the herb itself. With most tinctures, however, 1 part water at 5 parts ethanol
Ethanol
Ethanol, also called ethyl alcohol, pure alcohol, grain alcohol, or drinking alcohol, is a volatile, flammable, colorless liquid. It is a psychoactive drug and one of the oldest recreational drugs. Best known as the type of alcohol found in alcoholic beverages, it is also used in thermometers, as a...
is used.

Some examples that were formerly common in medicine include:

Examples of spirits include:

Ethanol is able to dissolve substances which are less soluble in water, while at the same time the water content can dissolve the substances less soluble in ethanol. It is possible to vary the proportion of ethanol and water to produce tinctures with different qualities because of different substances. One example of this is tincture of Calendula officinalis
Calendula officinalis
Calendula officinalis is a plant in the genus Calendula , in the family Asteraceae. It is probably native to southern Europe though its long history of cultivation makes its precise origin unknown, and may possibly be of garden origin...
, which is frequently used either at 25% ethanol or 90% ethanol. The solvent also acts as a preservative.

Chemically speaking, ethanol possesses a profound intrinsic denaturing and inert rendering quality. This quality accounts for a large part of ethanol's anti-microbial properties. This denaturing and inert rendering quality also has an undesired effect on many extracted botanical constituents. For instance, alcohol intrinsically fractures and denatures many highly complex aromatic compounds and denatures many extracted for polysaccharides. Other constituents are likewise subjected to denaturing and being rendered inert. The basic tenets of chemistry teach that anytime a biologically viable component is denatured or rendered inert, it will reduce or negate the prior biological viability. This factor needs to be seriously considered and weighed by the clinician or consumer when determining the hoped for biological viability of an ethanol-based botanical tincture both as to sought for efficacy and dosage considerations.

Ether and propylene glycol tinctures are not suitable for internal consumption and are instead used in such preparations as creams or ointments.