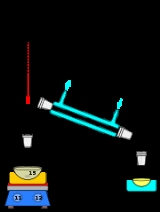 Overview
Distillation is a method of separating
Separation process
In chemistry and chemical engineering, a separation process, or simply a separation, is any mass transfer process used to convert a mixture of substances into two or more distinct product mixtures, at least one of which is enriched in one or more of the mixture's constituents. In some cases, a...
mixture
Mixture
In chemistry, a mixture is a material system made up by two or more different substances which are mixed together but are not combined chemically...
s based on differences in volatilities of components in a boiling liquid mixture. Distillation is a unit operation
Unit operation
In chemical engineering and related fields, a unit operation is a basic step in a process.Unit operation involves bringing a physical change such as separation, crystallization, evaporation, filtration etc.. For example in milk processing, homogenization, pasteurization, chilling, and packaging are...
, or a physical separation process, and not a chemical reaction
Chemical reaction
A chemical reaction is a process that leads to the transformation of one set of chemical substances to another. Chemical reactions can be either spontaneous, requiring no input of energy, or non-spontaneous, typically following the input of some type of energy, such as heat, light or electricity...
.

Commercially, distillation has a number of applications. It is used to separate crude oil into more fractions for specific uses such as transport
Transport
Transport or transportation is the movement of people, cattle, animals and goods from one location to another. Modes of transport include air, rail, road, water, cable, pipeline, and space. The field can be divided into infrastructure, vehicles, and operations...
, power generation and heating. Water is distilled to remove impurities, such as salt from seawater.

What is the round glass vessel used for distillation ?

What is the round glass vessel used for distillation ?