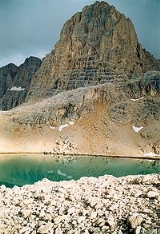 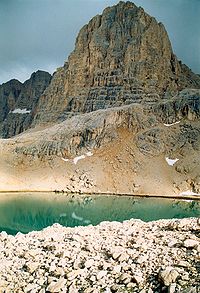 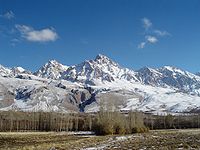 Taurus Mountains are a mountain complex
Mountain range
A mountain range is a single, large mass consisting of a succession of mountains or narrowly spaced mountain ridges, with or without peaks, closely related in position, direction, formation, and age; a component part of a mountain system or of a mountain chain...
in southern Turkey
Turkey
Turkey , known officially as the Republic of Turkey , is a Eurasian country located in Western Asia and in East Thrace in Southeastern Europe...
, dividing the Mediterranean coastal region
Mediterranean Region, Turkey
The Mediterranean Region is one of Turkey's seven census-defined geographical regions . It is bordered by the Aegean Region to the west, the Central Anatolia Region to the north, the Eastern Anatolia Region to the northeast, the Southeastern Anatolia Region to the east, Syria to the southeast, and...
of southern Turkey from the central Anatolian Plateau. The system extends along a curve from Lake Eğirdir
Lake Egirdir
Eğirdir is the name of a lake and of the town situated on the shore of that lake in Turkey. The lake lies in the Turkish Lakes Region and is 186 kilometers north of Antalya...
in the west to the upper reaches of the Euphrates
Euphrates
The Euphrates is the longest and one of the most historically important rivers of Western Asia. Together with the Tigris, it is one of the two defining rivers of Mesopotamia...
and Tigris
Tigris
The Tigris River is the eastern member of the two great rivers that define Mesopotamia, the other being the Euphrates. The river flows south from the mountains of southeastern Turkey through Iraq.-Geography:...
rivers in the east. grow a pair

A Bronze Age
Bronze Age
The Bronze Age is a period characterized by the use of copper and its alloy bronze as the chief hard materials in the manufacture of some implements and weapons. Chronologically, it stands between the Stone Age and Iron Age...
archaeological site, where early evidence of tin
Tin
Tin is a chemical element with the symbol Sn and atomic number 50. It is a main group metal in group 14 of the periodic table. Tin shows chemical similarity to both neighboring group 14 elements, germanium and lead and has two possible oxidation states, +2 and the slightly more stable +4...
mining
Mining
Mining is the extraction of valuable minerals or other geological materials from the earth, from an ore body, vein or seam. The term also includes the removal of soil. Materials recovered by mining include base metals, precious metals, iron, uranium, coal, diamonds, limestone, oil shale, rock...
was found, is at Kestel
Kestel
-Archaeology:Kestel is a probable site of Bronze Age tin mining in the Taurus Mountains in ancient Anatolia . Tin was as scarce and valuable as petroleum is today in the Bronze Age. It was a vital ingredient of bronze, used with copper to make the alloy.K...
. The pass known in antiquity as the Cilician Gates
Cilician Gates
The Cilician Gates or Gülek Pass is a pass through the Taurus Mountains connecting the low plains of Cilicia to the Anatolian Plateau, by way of the narrow gorge of the Gökoluk River. Its highest elevation is about 1000m....
crosses the range north of Tarsus
Tarsus (city)
Tarsus is a historic city in south-central Turkey, 20 km inland from the Mediterranean Sea. It is part of the Adana-Mersin Metropolitan Area, the fourth-largest metropolitan area in Turkey with a population of 2.75 million...
. During World War I
World War I
World War I , which was predominantly called the World War or the Great War from its occurrence until 1939, and the First World War or World War I thereafter, was a major war centred in Europe that began on 28 July 1914 and lasted until 11 November 1918...
, a German and Turkish railway system through the Taurus Mountains proved to be a major strategic objective of the Allies. This region was specifically mentioned as a strategically controlled objective slated for surrender to the Allies in the Armistice
Armistice
An armistice is a situation in a war where the warring parties agree to stop fighting. It is not necessarily the end of a war, but may be just a cessation of hostilities while an attempt is made to negotiate a lasting peace...
, which ended hostilities against the Ottoman Empire
Ottoman Empire
The Ottoman EmpireIt was usually referred to as the "Ottoman Empire", the "Turkish Empire", the "Ottoman Caliphate" or more commonly "Turkey" by its contemporaries...
.

In the Aladaglar and Bolkar mountains, limestone
Limestone
Limestone is a sedimentary rock composed largely of the minerals calcite and aragonite, which are different crystal forms of calcium carbonate . Many limestones are composed from skeletal fragments of marine organisms such as coral or foraminifera....
has eroded to form karst
KARST
Kilometer-square Area Radio Synthesis Telescope is a Chinese telescope project to which FAST is a forerunner. KARST is a set of large spherical reflectors on karst landforms, which are bowlshaped limestone sinkholes named after the Kras region in Slovenia and Northern Italy. It will consist of...
ic landscapes of waterfall
Waterfall
A waterfall is a place where flowing water rapidly drops in elevation as it flows over a steep region or a cliff.-Formation:Waterfalls are commonly formed when a river is young. At these times the channel is often narrow and deep. When the river courses over resistant bedrock, erosion happens...
s, underground rivers, and some of the largest cave
Cave
A cave or cavern is a natural underground space large enough for a human to enter. The term applies to natural cavities some part of which is in total darkness. The word cave also includes smaller spaces like rock shelters, sea caves, and grottos.Speleology is the science of exploration and study...
s of Asia
Asia
Asia is the world's largest and most populous continent, located primarily in the eastern and northern hemispheres. It covers 8.7% of the Earth's total surface area and with approximately 3.879 billion people, it hosts 60% of the world's current human population...
. The Manavgat River
Manavgat River
Manavgat River originates on the eastern slopes of Western Taurus Mountains in Turkey, and flows south over conglomerated strata for about 90 km, then over the Manavgat Waterfall and though the coastal plain and into the Mediterranean Sea...
originates on the southern slopes of the Beydaglari range.

In addition to hiking and mountain climbing, there are two ski resort
Ski resort
A ski resort is a resort developed for skiing and other winter sports. In Europe a ski resort is a town or village in a ski area - a mountainous area, where there are ski trails and supporting services such as hotels and other accommodation, restaurants, equipment rental and a ski lift system...
s on the mountain range, one at Davras about 25 km (15.5 mi) from the two nearest towns of Egirdir
Egirdir
Eğirdir, Turkey is a town and district of Isparta Province in the Mediterranean region of Turkey.-Features:Eğirdir lies between Lake Eğirdir and the Mount Sivri, and contains a castle said to have been built by Croesus, king of Lydia—though additions were built by the Romans, Byzantines and...
and Isparta
Isparta
Isparta is a city in western Turkey and the provincial capital of the Isparta Province. The city's population is 222,556 and elevation from sea level is 1035 m. Another name of the city is "City of Roses"....
, the second is Saklıkent
Saklikent
Saklıkent is a winter resort in Turkey, 45 kilometres from Antalya and 60 kilometres from Antalya Airport. It is open for skiing from November to May. Because of its proximity to Antalya, one can ski and then one hour later swim in the Mediterranean Sea....
40 km (24.9 mi) from the city of Antalya
Antalya
Antalya is a city on the Mediterranean coast of southwestern Turkey. With a population 1,001,318 as of 2010. It is the eighth most populous city in Turkey and country's biggest international sea resort.- History :...
.