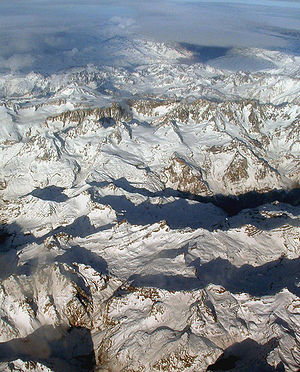 A mountain range is a single, large mass consisting of a succession of mountain
Mountain
Image:Himalaya_annotated.jpg|thumb|right|The Himalayan mountain range with Mount Everestrect 58 14 160 49 Chomo Lonzorect 200 28 335 52 Makalurect 378 24 566 45 Mount Everestrect 188 581 920 656 Tibetan Plateaurect 250 406 340 427 Rong River...
s or narrowly spaced mountain ridges, with or without peaks, closely related in position, direction, formation, and age; a component part of a mountain system or of a mountain chain. Other definitions may include a mountain system which is a group of mountain ranges exhibiting certain unifying features, such as similarity in form, structure, and alignment, and presumably originating from the same general causes; esp. a series of ranges belonging to an orogenic belt. A mountain system or system of mountain ranges sometimes is used to combine several geological features that are geographically (regionally) related.

Mountain ranges are usually segmented by highlands
Highland (geography)
The term highland or upland is used to denote any mountainous region or elevated mountainous plateau. Generally speaking, the term upland tends to be used for ranges of hills, typically up to 500-600m, and highland for ranges of low mountains.The Scottish Highlands refers to the mountainous...
or mountain pass
Mountain pass
A mountain pass is a route through a mountain range or over a ridge. If following the lowest possible route, a pass is locally the highest point on that route...
es and valley
Valley
In geology, a valley or dale is a depression with predominant extent in one direction. A very deep river valley may be called a canyon or gorge.The terms U-shaped and V-shaped are descriptive terms of geography to characterize the form of valleys...
s. Individual mountains within the same mountain range do not necessarily have the same geologic structure
Structural geology
Structural geology is the study of the three-dimensional distribution of rock units with respect to their deformational histories. The primary goal of structural geology is to use measurements of present-day rock geometries to uncover information about the history of deformation in the rocks, and...
or petrology
Petrology
Petrology is the branch of geology that studies rocks, and the conditions in which rocks form....
. They may be a mix of different orogenic expressions
Orogeny
Orogeny refers to forces and events leading to a severe structural deformation of the Earth's crust due to the engagement of tectonic plates. Response to such engagement results in the formation of long tracts of highly deformed rock called orogens or orogenic belts...
and terrane
Terrane
A terrane in geology is short-hand term for a tectonostratigraphic terrane, which is a fragment of crustal material formed on, or broken off from, one tectonic plate and accreted or "sutured" to crust lying on another plate...
s, for example thrust sheets
Thrust fault
A thrust fault is a type of fault, or break in the Earth's crust across which there has been relative movement, in which rocks of lower stratigraphic position are pushed up and over higher strata. They are often recognized because they place older rocks above younger...
, uplifted blocks
Fault-block mountain
Fault-block landforms are formed when large areas of bedrock are widely broken up by faults creating large vertical displacements of continental crust....
, fold
Fold (geology)
The term fold is used in geology when one or a stack of originally flat and planar surfaces, such as sedimentary strata, are bent or curved as a result of permanent deformation. Synsedimentary folds are those due to slumping of sedimentary material before it is lithified. Folds in rocks vary in...
mountains and volcanic landforms resulting in a variety of rock types
Lithology
The lithology of a rock unit is a description of its physical characteristics visible at outcrop, in hand or core samples or with low magnification microscopy, such as colour, texture, grain size, or composition. It may be either a detailed description of these characteristics or be a summary of...
.

Considering underwater topography, the Ocean Ridges of the world form the longest mountain systems on Earth. Above sea level major mountain systems are chiefly arranged in two regions; the Pacific Ring of Fire
Pacific Ring of Fire
The Pacific Ring of Fire is an area where large numbers of earthquakes and volcanic eruptions occur in the basin of the Pacific Ocean. In a horseshoe shape, it is associated with a nearly continuous series of oceanic trenches, volcanic arcs, and volcanic belts and/or plate movements...
and the Alpide Belt
Alpide belt
The Alpide belt is a mountain range which extends along the southern margin of Eurasia. Stretching from Java to Sumatra through the Himalayas, the Mediterranean, and out into the Atlantic, it includes the Alps, the Carpathians, the mountains of Asia Minor and Iran, the Hindu Kush, the Himalayas,...
. The first includes the mountains of the western coast of the Americas, Kamatchaka, Japan, the Philipines, as well as parts of Indonesia and Papua New Guinea. The Alpide Belt runs from Indonesia to the Alps including the Himalayas and other European and Asian ranges.

Above sea level the Andes
Andes
The Andes is the world's longest continental mountain range. It is a continual range of highlands along the western coast of South America. This range is about long, about to wide , and of an average height of about .Along its length, the Andes is split into several ranges, which are separated...
is usually considered the world's longest mountain system; it is 7000 kilometres (4,349.6 mi) in length.

The Himalaya Range contains the highest mountains on the Earth
Earth
Earth is the third planet from the Sun, and the densest and fifth-largest of the eight planets in the Solar System. It is also the largest of the Solar System's four terrestrial planets...
's surface, the highest of which is Mount Everest
Mount Everest
Mount Everest is the world's highest mountain, with a peak at above sea level. It is located in the Mahalangur section of the Himalayas. The international boundary runs across the precise summit point...
. The world's longest mountain system is known as Ocean Ridge, which is a chain of mountains that runs on the seafloor of five oceans around the world; it has a length of 65000 kilometres (40,389.2 mi), and the total length of the system is 80000 kilometres (49,709.8 mi). The Andes
Andes
The Andes is the world's longest continental mountain range. It is a continual range of highlands along the western coast of South America. This range is about long, about to wide , and of an average height of about .Along its length, the Andes is split into several ranges, which are separated...
is the world's longest mountain system on the surface of a continent
Continent
A continent is one of several very large landmasses on Earth. They are generally identified by convention rather than any strict criteria, with seven regions commonly regarded as continents—they are : Asia, Africa, North America, South America, Antarctica, Europe, and Australia.Plate tectonics is...
; it is 7000 kilometres (4,349.6 mi) in length. To clarify, the Andes is the world's largest chain of mountains above sea level. The Arctic Cordillera
Arctic Cordillera
The Arctic Cordillera is a vast, deeply dissected chain of mountain ranges extending along the northeastern flank of the Canadian Arctic Archipelago from Ellesmere Island to the northeasternmost part of the Labrador Peninsula in northern Labrador and northern Quebec, Canada...
is the world's northernmost mountain system and contains the highest point in eastern North America
North America
North America is a continent wholly within the Northern Hemisphere and almost wholly within the Western Hemisphere. It is also considered a northern subcontinent of the Americas...
.

The position of mountains influences climate, such as rain or snow. When air masses move up and over mountains, the air cools producing orographic
Orography
Orography is the study of the formation and relief of mountains, and can more broadly include hills, and any part of a region's elevated terrain...
precipitation (rain or snow). As the air descends on the leeward side, it warms again (in accordance with the adiabatic lapse rate) and is drier, having been stripped of much of its moisture. Often, a rain shadow
Rain shadow
A rain shadow is a dry area on the lee side of a mountainous area. The mountains block the passage of rain-producing weather systems, casting a "shadow" of dryness behind them. As shown by the diagram to the right, the warm moist air is "pulled" by the prevailing winds over a mountain...
will affect the leeward side of a range.

Mountain ranges are constantly subjected to erosional
Erosion
Erosion is when materials are removed from the surface and changed into something else. It only works by hydraulic actions and transport of solids in the natural environment, and leads to the deposition of these materials elsewhere...
forces which work to tear them down. Erosion is at work while the mountains are being uplifted and long after until the mountains are reduced to low hills and plains. The rugged topography of a mountain range is the product of erosion. The basins
Sedimentary basin
The term sedimentary basin is used to refer to any geographical feature exhibiting subsidence and consequent infilling by sedimentation. As the sediments are buried, they are subjected to increasing pressure and begin the process of lithification...
adjacent to an eroding mountain range are filled with sediments which are buried and turned into sedimentary rock
Sedimentary rock
Sedimentary rock are types of rock that are formed by the deposition of material at the Earth's surface and within bodies of water. Sedimentation is the collective name for processes that cause mineral and/or organic particles to settle and accumulate or minerals to precipitate from a solution....
.

The early Cenozoic
Cenozoic
The Cenozoic era is the current and most recent of the three Phanerozoic geological eras and covers the period from 65.5 mya to the present. The era began in the wake of the Cretaceous–Tertiary extinction event at the end of the Cretaceous that saw the demise of the last non-avian dinosaurs and...
uplift of the Rocky Mountains
Rocky Mountains
The Rocky Mountains are a major mountain range in western North America. The Rocky Mountains stretch more than from the northernmost part of British Columbia, in western Canada, to New Mexico, in the southwestern United States...
of Colorado provide an example. As the uplift was occurring some 10000 feet (3,048 m) of mostly Mesozoic
Mesozoic
The Mesozoic era is an interval of geological time from about 250 million years ago to about 65 million years ago. It is often referred to as the age of reptiles because reptiles, namely dinosaurs, were the dominant terrestrial and marine vertebrates of the time...
sedimentary strata
Stratum
In geology and related fields, a stratum is a layer of sedimentary rock or soil with internally consistent characteristics that distinguish it from other layers...
were removed by erosion over the core of the mountain range and spread as sand and clays across the Great Plains
Great Plains
The Great Plains are a broad expanse of flat land, much of it covered in prairie, steppe and grassland, which lies west of the Mississippi River and east of the Rocky Mountains in the United States and Canada. This area covers parts of the U.S...
to the east. This mass of rock was removed as the range was actively undergoing uplift. The removal of such a mass from the core of the range most likely caused further uplift as the region adjusted isostatically in response to the removed weight.