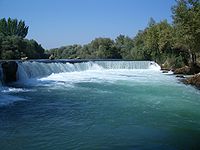 Manavgat River originates on the eastern slopes of Western Taurus Mountains
Taurus Mountains
Taurus Mountains are a mountain complex in southern Turkey, dividing the Mediterranean coastal region of southern Turkey from the central Anatolian Plateau. The system extends along a curve from Lake Eğirdir in the west to the upper reaches of the Euphrates and Tigris rivers in the east...
in Turkey
Turkey
Turkey , known officially as the Republic of Turkey , is a Eurasian country located in Western Asia and in East Thrace in Southeastern Europe...
, and flows south over conglomerated strata
Stratum
In geology and related fields, a stratum is a layer of sedimentary rock or soil with internally consistent characteristics that distinguish it from other layers...
for about 90 km, then over the Manavgat Waterfall
Manavgat Waterfall
Manavgat Waterfall on the Manavgat River is near the city of Side, north of Manavgat, Turkey. Its high flow over a wide area as it falls from a low height is best viewed from a high altitude....
and though the coastal plain
Coastal plain
A coastal plain is an area of flat, low-lying land adjacent to a seacoast and separated from the interior by other features. One of the world's longest coastal plains is located in eastern South America. The southwestern coastal plain of North America is notable for its species diversity...
and into the Mediterranean Sea
Mediterranean Sea
The Mediterranean Sea is a sea connected to the Atlantic Ocean surrounded by the Mediterranean region and almost completely enclosed by land: on the north by Anatolia and Europe, on the south by North Africa, and on the east by the Levant...
. There are many caves in the river watershed area, the most interesting being the Altınbeşik cave.

The maximum flow of the Manavgat River is 500 m³/second, with an average of 147 m³/second. Using the average flow as a measure, the Manavgat River accounts for a very small amount ot the water flowing into the Mediterranean. There are two dams over the river: Oymapınar Dam
Oymapinar Dam
Oymapinar Dam is an arch dam built on the Manavgat river in Turkey in 1984. It is an arch dam in design, 185 m in height, built to generate hydroelectric power.Oymapınar Dam is located 12 km north of Manavgat Waterfall...
and the Manavgat Dam
Manavgat Dam
Manavgat Dam is a dam in Turkey. The development was backed by the Turkish State Hydraulic Works.-References:*, State Hydraulic Works , Retrieved December 16, 2009- External links :*...
. Studies have shown that water drains into the Manavgat River basin from its surface watershed
Drainage basin
A drainage basin is an extent or an area of land where surface water from rain and melting snow or ice converges to a single point, usually the exit of the basin, where the waters join another waterbody, such as a river, lake, reservoir, estuary, wetland, sea, or ocean...
and also from endorheic basins, especially those to the east of the river.

In 1992, the Turkish State Hydraulics Work (DSI) was given the job of developing a water supply
Water supply
Water supply is the provision of water by public utilities, commercial organisations, community endeavours or by individuals, usually via a system of pumps and pipes...
project for domestic use from the Manavgat river.