Encyclopedia
is a Japan
Japan
Japan is an island nation in East Asia. Located in the Pacific Ocean, it lies to the east of the Sea of Japan, China, North Korea, South Korea and Russia, stretching from the Sea of Okhotsk in the north to the East China Sea and Taiwan in the south...
ese brewing and distilling company group. Established in 1899, it is one of the oldest companies in the distribution of alcoholic beverage
Alcoholic beverage
An alcoholic beverage is a drink containing ethanol, commonly known as alcohol. Alcoholic beverages are divided into three general classes: beers, wines, and spirits. They are legally consumed in most countries, and over 100 countries have laws regulating their production, sale, and consumption...
s in Japan. Its business has expanded to other fields, and the company now offers everything from soft drink
Soft drink
A soft drink is a non-alcoholic beverage that typically contains water , a sweetener, and a flavoring agent...
s to sandwich
Sandwich
A sandwich is a food item, typically consisting of two or more slices of :bread with one or more fillings between them, or one slice of bread with a topping or toppings, commonly called an open sandwich. Sandwiches are a widely popular type of lunch food, typically taken to work or school, or...
chains. Suntory is headquartered in Dojimahama 2-chome
Japanese addressing system
The Japanese addressing system is used to identify a specific location in Japan. In Japanese, addresses are written using the opposite convention from Western addresses, starting with the biggest geographical entities down to the more specific ones....
, Kita-ku
Kita-ku, Osaka
is one of 24 wards of Osaka, Japan.-Economy:West Japan Railway Company has its headquarters in Kita-ku. Nihon Bussan has its headquarters in Kita-ku. Dentsu and Yomiuri Shimbun have branch offices in Kita-ku. Mazda has an office in the Umeda Sky Building Tower East. Air France has an office on the...
, Osaka
Osaka
is a city in the Kansai region of Japan's main island of Honshu, a designated city under the Local Autonomy Law, the capital city of Osaka Prefecture and also the biggest part of Keihanshin area, which is represented by three major cities of Japan, Kyoto, Osaka and Kobe...
, Osaka prefecture
Osaka Prefecture
is a prefecture located in the Kansai region on Honshū, the main island of Japan. The capital is the city of Osaka. It is the center of Osaka-Kobe-Kyoto area.- History :...
.

On July 14, 2009, Kirin
Kirin Brewery Company
is a Japanese company. It is a member of the Mitsubishi keiretsu.-Overview:Kirin sells two of the most popular beers in Japan, Kirin Lager--the country's oldest beer brand--and Ichiban Shibori. In the happoshu category, Kirin Tanrei is the top seller. Kirin handles domestic distribution for...
announced that it is negotiating with Suntory on a merger. On February 8, 2010, it was announced that negotiations between the two were terminated. 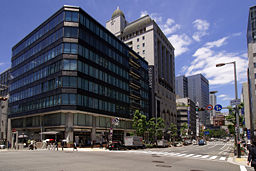 Suntory was started by Torii Shinjiro, who first opened his store Torii Shoten in Osaka
Osaka
is a city in the Kansai region of Japan's main island of Honshu, a designated city under the Local Autonomy Law, the capital city of Osaka Prefecture and also the biggest part of Keihanshin area, which is represented by three major cities of Japan, Kyoto, Osaka and Kobe...
on February 1, 1899, to sell imported wine
Wine
Wine is an alcoholic beverage, made of fermented fruit juice, usually from grapes. The natural chemical balance of grapes lets them ferment without the addition of sugars, acids, enzymes, or other nutrients. Grape wine is produced by fermenting crushed grapes using various types of yeast. Yeast...
s. In 1907, the store began selling a sweet tasting red wine called Akadama Port Wine. The store became the Kotobukiya company in 1921 to further expand its business. In December 1924, Yamazaki Distillery
Yamazaki Distillery
is a Japanese whisky distillery located in Shimamoto, Osaka, owned by Suntory. It was opened in 1923 and was Japan's first whisky distillery. Seven thousand bottles of unblended malt whisky are on display in the "Whisky Library".- History :...
, the first Japanese whisky
Japanese whisky
Whisky production in Japan began around 1870, but the first commercial production was in 1924 upon the opening of the country's first distillery, Yamazaki...
distillery, began its production of malt whisky. Five years later Suntory Whisky
Whisky
Whisky or whiskey is a type of distilled alcoholic beverage made from fermented grain mash. Different grains are used for different varieties, including barley, malted barley, rye, malted rye, wheat, and corn...
Sirofuda (White Label), the first single malt whisky made in Japan, was sold.

Due to wartime shortage of World War II
World War II
World War II, or the Second World War , was a global conflict lasting from 1939 to 1945, involving most of the world's nations—including all of the great powers—eventually forming two opposing military alliances: the Allies and the Axis...
, Kotobukiya was briefly forced to halt its development of new products. In 1961, Kotobukiya launched the famous "Drink Tory's (Whisky) and Go to Hawaii
Hawaii
Hawaii is the newest of the 50 U.S. states , and is the only U.S. state made up entirely of islands. It is the northernmost island group in Polynesia, occupying most of an archipelago in the central Pacific Ocean, southwest of the continental United States, southeast of Japan, and northeast of...
" campaign. At the time, a trip abroad was considered a once-in-a-lifetime opportunity. In 1963, Kotobukiya changed its name to "Suntory", taken from the name of the famous whisky it produces. In the same year, Musashino Beer Factory began its production of the Suntory Beer. In 1997, the company became Japan
Japan
Japan is an island nation in East Asia. Located in the Pacific Ocean, it lies to the east of the Sea of Japan, China, North Korea, South Korea and Russia, stretching from the Sea of Okhotsk in the north to the East China Sea and Taiwan in the south...
's sole bottler, distributor, and licensee of Pepsi
Pepsi
Pepsi is a carbonated soft drink that is produced and manufactured by PepsiCo...
products. 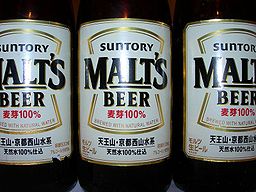 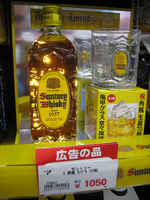 From the early 1990s, Suntory has collaborated extensively with Melbourne biotechnology firm Florigene
Florigene
Florigene is a biotechnology company based in Melbourne, Australia, which is principally involved in the application of in-house genetic modification techniques to develop novel colour expressions in a range of commercial plants....
to genetically engineer the world's first true blue rose
Blue rose
Blue roses, often portrayed in literature and art as a symbol of love and prosperity to those who seek it, do not exist in nature as a result of genetic limitations being imposed upon natural variance. Traditionally, white roses have been dyed blue to produce a blue appearance. In 2004, researchers...
, a symbol often associated with the impossible or unattainable. In 1991, the team won the intense global race to isolate the gene responsible for blue flowers, and has since developed a range of genetically modified flowers expressing colors in the blue spectrum, as well as a number of other breakthroughs extending the vase life
Vase life
Vase life is the period of time during which a cut flower or cut foliage retains its appearance in a vase. This is a major consideration in identifying plant species suitable for use in the cut flower industry, plants with a long vase life being far more desirable than those with a short vase life....
of cut flowers.

In 2003, Suntory acquired a 98.5% equity holding in Florigene. Prior to this, Florigene had been a subsidiary of global agrochemicals giant Nufarm Limited since 1999. In July 2004, Suntory and Florigene scientists announced to the world the development of the first roses containing blue pigment, an important step toward the creation of a truly blue colored rose.

In July 2011, Suntory Beverage and Food Limited together with PT GarudaFood from Indonesia
Indonesia
Indonesia , officially the Republic of Indonesia , is a country in Southeast Asia and Oceania. Indonesia is an archipelago comprising approximately 13,000 islands. It has 33 provinces with over 238 million people, and is the world's fourth most populous country. Indonesia is a republic, with an...
have agreed to make a new firm to produce non-alcoholic drink with 51 percent and 49 percent shares respectively. It will produce Suntory Ooolong Tea, Boss and Orangina.

The following drinks were approved as Food for Specified Health Uses (FOSHU).