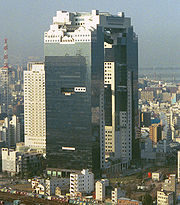 is one of 24 wards
Wards of Japan
A is a subdivision of one of the cities of Japan that is large enough to have been designated by government ordinance. Wards are used to subdivide each city designated by government ordinance...
of Osaka
Osaka
is a city in the Kansai region of Japan's main island of Honshu, a designated city under the Local Autonomy Law, the capital city of Osaka Prefecture and also the biggest part of Keihanshin area, which is represented by three major cities of Japan, Kyoto, Osaka and Kobe...
, Japan
Japan
Japan is an island nation in East Asia. Located in the Pacific Ocean, it lies to the east of the Sea of Japan, China, North Korea, South Korea and Russia, stretching from the Sea of Okhotsk in the north to the East China Sea and Taiwan in the south...
.

West Japan Railway Company
West Japan Railway Company
, also referred to as , is one of the Japan Railways Group companies and operates in western Honshū. It has its headquarters in Kita-ku, Osaka.-History:...
has its headquarters in Kita-ku. Nihon Bussan
Nihon Bussan
Nihon Bussan Co., Ltd. is a Japanese video game manufacturer, commonly known as Nichibutsu . The company uses an owl sign for the company's official logo. The company has its headquarters in Kita-ku, Osaka....
has its headquarters in Kita-ku. Dentsu
Dentsu
is one of the largest advertising agencies in the world. Its headquarters are located in the Dentsu Building in the Shiodome district of Minato, Tokyo....
and Yomiuri Shimbun
Yomiuri Shimbun
The is a Japanese newspaper published in Tokyo, Osaka, Fukuoka, and other major Japanese cities. It is one of the five national newspapers in Japan; the other four are the Asahi Shimbun, the Mainichi Shimbun, Nihon Keizai Shimbun, and the Sankei Shimbun...
have branch offices in Kita-ku. Mazda
Mazda
is a Japanese automotive manufacturer based in Fuchū, Aki District, Hiroshima Prefecture, Japan.In 2007, Mazda produced almost 1.3 million vehicles for global sales...
has an office in the Umeda Sky Building Tower East. Air France
Air France
Air France , stylised as AIRFRANCE, is the French flag carrier headquartered in Tremblay-en-France, , and is one of the world's largest airlines. It is a subsidiary of the Air France-KLM Group and a founding member of the SkyTeam global airline alliance...
has an office on the third and sixth floors of the Shin-Sakurabashi Building in Umeda. The office handles Aircalin
Aircalin
Société Aircalin, also known as Air Calédonie International, is the international airline of New Caledonia. It operates scheduled services to 10 regional destinations, including Japan. Its main base is La Tontouta International Airport...
-related inquiries. Google
Google
Google Inc. is an American multinational public corporation invested in Internet search, cloud computing, and advertising technologies. Google hosts and develops a number of Internet-based services and products, and generates profit primarily from advertising through its AdWords program...
has an office in the Hankyu Grand Building in Kita-ku. Bandai Visual
Bandai Visual
, is a Japanese anime, film production and distribution enterprise, established by Bandai Co., Ltd. and a subsidiary of Namco Bandai Holdings, Inc., which is based in Minato, Tokyo, Japan. Since the reorganisation of Namco Bandai Holdings in 2006, Bandai Visual now heads the group's Visual and...
's Kansai Office opened in Kita-ku in March 1988; the division is now known as the Osaka Branch.

The Consulate-General of the United States in Osaka is located in Kita-ku. The Consulate-General of Belgium in Osaka
Diplomatic missions of Belgium
This is a list of diplomatic missions of Belgium, excluding honorary consulates. Belgium is unique in having three networks of representation — one for the Belgian state, another for Dutch-speaking community of Flanders and Brussels, and a third one for the French-language Community of...
is located on the twelfth floor of the Snow Crystal Building in Umeda
Umeda
Umeda is the main commercial and central business district in Kita-ku, Osaka, Japan, best known as the city's main northern railway terminus .Umeda is a large traffic hub, as well as the principal office and hotel district...
, Kita-ku. The Consulate-General of Germany in Osaka
Diplomatic missions of Germany
This is a list of diplomatic missions of Germany. Historically, the German state of Prussia and several smaller German states, had sent emissaries abroad prior to the establishment of the North German Confederation, the precursor to the modern State of Germany.In 1874 Germany had only four...
is located on the thirty-fifth floor of the Umeda Sky Building Tower East in Kita-ku.

Commercial and business centre of Kansai
Kansai
The or the lies in the southern-central region of Japan's main island Honshū. The region includes the prefectures of Mie, Nara, Wakayama, Kyoto, Osaka, Hyōgo, and Shiga. Depending on who makes the distinction, Fukui, Tokushima and even Tottori Prefecture are also included...
region with many high-rise buildings and large underground complexes.

Government facilities and museums, and office buildings is situated on this island. Notable establishments is City hall, Central Public Hall, Bank of Japan
Bank of Japan
is the central bank of Japan. The Bank is often called for short. It has its headquarters in Chuo, Tokyo.-History:Like most modern Japanese institutions, the Bank of Japan was founded after the Meiji Restoration...
Osaka branch and Osaka International Convention Center
Osaka International Convention Center
The is a multi-purpose convention center in the city of Osaka, Osaka Prefecture, Japan.A Keihan railway station is located underground , operating as the terminus for the Nakanoshima Line.- Past events :...
.
National Museum of Art, Osaka
National Museum of Art, Osaka
The is a subterranean Japanese art museum located on the island of Nakanoshima, located between the Dōjima River and the Tosabori River, about 5 minutes west of Higobashi Station in central Osaka....
and Osaka Science Museum
Osaka Science Museum
The is a science museum in Naka-no-shima, Kita-ku, Osaka, Japan. The museum is located between the Dōjima River and the Tosabori River, above Osaka's subterranean National Museum of Art. Opened in 1989, the museum was constructed to mark the 100th anniversary of Osaka City. The construction was...
is also in this island. 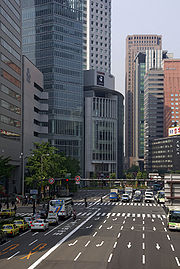 The following stations are also connected to Osaka and Umeda by underground passageways:

Other stations in Kita-ku: