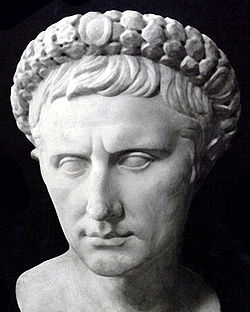 A strongman is a political leader who rules by force and runs an authoritarian regime. The term is often used interchangeably with "dictator
Dictator
A dictator is a ruler who assumes sole and absolute power but without hereditary ascension such as an absolute monarch. When other states call the head of state of a particular state a dictator, that state is called a dictatorship...
," but differs from a "warlord
Warlord
A warlord is a person with power who has both military and civil control over a subnational area due to armed forces loyal to the warlord and not to a central authority. The term can also mean one who espouses the ideal that war is necessary, and has the means and authority to engage in war...
".

A strongman is not necessarily always a formal head of government
Head of government
Head of government is the chief officer of the executive branch of a government, often presiding over a cabinet. In a parliamentary system, the head of government is often styled prime minister, chief minister, premier, etc...
, however. Sometimes the term is used to describe a military or political figure who exercises far more influence over the government than is constitutionally allowed. General Manuel Noriega
Manuel Noriega
Manuel Antonio Noriega Moreno is a Panamanian politician and soldier. He was military dictator of Panama from 1983 to 1989.The 1989 invasion of Panama by the United States removed him from power; he was captured, detained as a prisoner of war, and flown to the United States. Noriega was tried on...
, for example, was often dubbed the "Strongman of Panama" for the enormous amount of political power he exercised over Panama
Panama
Panama , officially the Republic of Panama , is the southernmost country of Central America. Situated on the isthmus connecting North and South America, it is bordered by Costa Rica to the northwest, Colombia to the southeast, the Caribbean Sea to the north and the Pacific Ocean to the south. The...
, despite the fact that he was not the formal president
President
A president is a leader of an organization, company, trade union, university, or country.Etymologically, a president is one who presides, who sits in leadership...
of the state. The same can be said for General Rahimuddin Khan
Rahimuddin Khan
Rahimuddin Khan Afridi is a retired four-star general of the Pakistan Army who was the fourth Chairman of the Joint Chiefs of Staff Committee from 1984 to 1987. He was also the longest-serving Governor and martial law administrator of Balochistan, from 1978 to when he resigned in 1984...
, often termed as the "Strongman of Balochistan
Balochistan (Pakistan)
Balochistan is one of the four provinces or federating units of Pakistan. With an area of 134,051 mi2 or , it is the largest province of Pakistan, constituting approximately 44% of the total land mass of Pakistan. According to the 1998 population census, Balochistan had a population of...
", whose post as martial law administrator was junior to that of then head of state, Zia-ul-Haq, but still phenomenally powerful. 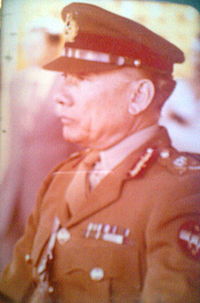 Political figures referred to as "strongmen"