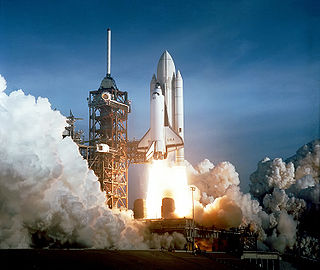 The Space Age is a time period encompassing the activities related to the Space Race
Space Race
The Space Race was a mid-to-late 20th century competition between the Soviet Union and the United States for supremacy in space exploration. Between 1957 and 1975, Cold War rivalry between the two nations focused on attaining firsts in space exploration, which were seen as necessary for national...
, space exploration
Space exploration
Space exploration is the use of space technology to explore outer space. Physical exploration of space is conducted both by human spaceflights and by robotic spacecraft....
, space technology, and the cultural developments influenced by these events. The Space Age is generally considered to have begun with Sputnik (1957). Furthermore it is argued that this age brought a new dimension to the Cold War
Cold War
The Cold War was the continuing state from roughly 1946 to 1991 of political conflict, military tension, proxy wars, and economic competition between the Communist World—primarily the Soviet Union and its satellite states and allies—and the powers of the Western world, primarily the United States...
.

The first man-made rocket to breach the boundary of space was a German V-2 rocket
V-2 rocket
The V-2 rocket , technical name Aggregat-4 , was a ballistic missile that was developed at the beginning of the Second World War in Germany, specifically targeted at London and later Antwerp. The liquid-propellant rocket was the world's first long-range combat-ballistic missile and first known...
(also known as A4) in 1942. Because of its destructive use during World War II
World War II
World War II, or the Second World War , was a global conflict lasting from 1939 to 1945, involving most of the world's nations—including all of the great powers—eventually forming two opposing military alliances: the Allies and the Axis...
it did not gain scientific acknowledgment at the time. Its chief developer Wernher von Braun
Wernher von Braun
Wernher Magnus Maximilian, Freiherr von Braun was a German rocket scientist, aerospace engineer, space architect, and one of the leading figures in the development of rocket technology in Nazi Germany during World War II and in the United States after that.A former member of the Nazi party,...
later became involved with NASA
NASA
The National Aeronautics and Space Administration is the agency of the United States government that is responsible for the nation's civilian space program and for aeronautics and aerospace research...
.

The Space Age began with the development of several technologies that culminated on October 4, 1957, with the launch of Sputnik 1
Sputnik 1
Sputnik 1 ) was the first artificial satellite to be put into Earth's orbit. It was launched into an elliptical low Earth orbit by the Soviet Union on 4 October 1957. The unanticipated announcement of Sputnik 1s success precipitated the Sputnik crisis in the United States and ignited the Space...
by the Soviet Union
Soviet Union
The Soviet Union , officially the Union of Soviet Socialist Republics , was a constitutionally socialist state that existed in Eurasia between 1922 and 1991....
. This was the known world's first artificial satellite, orbiting the Earth in 98.1 minutes and weighing in at 83 kg. The launch of Sputnik 1 ushered a new era of political, scientific and technological achievements that became known as the Space Age.

The Space Age was characterized by rapid development of new technology in a close race mostly between the US and the Soviet Union. Rapid advances were made in rocket
Rocket
A rocket is a missile, spacecraft, aircraft or other vehicle which obtains thrust from a rocket engine. In all rockets, the exhaust is formed entirely from propellants carried within the rocket before use. Rocket engines work by action and reaction...
ry, materials science
Materials science
Materials science is an interdisciplinary field applying the properties of matter to various areas of science and engineering. This scientific field investigates the relationship between the structure of materials at atomic or molecular scales and their macroscopic properties. It incorporates...
, computer
Computer
A computer is a programmable machine designed to sequentially and automatically carry out a sequence of arithmetic or logical operations. The particular sequence of operations can be changed readily, allowing the computer to solve more than one kind of problem...
s and other areas. Much of the technology originally developed for space applications has been spun off
Government spin-off
Government spin-off is civilian goods which are the result of military or governmental research. One prominent example of a type of government spin-off is technology that has been commercialized through NASA funding, research, licensing, facilities, or assistance. NASA spin-off technologies have...
and found other uses.

The Space Age reached its peak with the Apollo program, that captured the imagination of much of the world's population. The landing of Apollo 11
Apollo 11
In early 1969, Bill Anders accepted a job with the National Space Council effective in August 1969 and announced his retirement as an astronaut. At that point Ken Mattingly was moved from the support crew into parallel training with Anders as backup Command Module Pilot in case Apollo 11 was...
was watched by over 500 million people around the world and is widely recognized as one of the defining moments of the 20th century. Since then, public attention has largely moved to other areas. Public perception of the dangers and cost of space exploration
Space exploration
Space exploration is the use of space technology to explore outer space. Physical exploration of space is conducted both by human spaceflights and by robotic spacecraft....
in the US was greatly affected by the Challenger disaster in 1986. Public interest in space exploration further faded when the space race came to an end due to the dissolution of the Soviet Union
Dissolution of the Soviet Union
The dissolution of the Soviet Union was the disintegration of the federal political structures and central government of the Union of Soviet Socialist Republics , resulting in the independence of all fifteen republics of the Soviet Union between March 11, 1990 and December 25, 1991...
.

During the 1990s funding for space related programs fell sharply as the remaining structures of the Soviet Union disintegrated and NASA no longer had any direct competition.

Since then participation in space launches has increasingly widened to more governments and commercial interests. Since the 1990s, the current period has more often been referred to as the Information Age
Information Age
The Information Age, also commonly known as the Computer Age or Digital Age, is an idea that the current age will be characterized by the ability of individuals to transfer information freely, and to have instant access to knowledge that would have been difficult or impossible to find previously...
rather than the Space Age, since space exploration and space-related technologies gained a perception by many people of being commonplace.

In the early 21st century, the Ansari X Prize
Ansari X Prize
The Ansari X Prize was a space competition in which the X Prize Foundation offered a US$10,000,000 prize for the first non-government organization to launch a reusable manned spacecraft into space twice within two weeks...
competition was set up to help jump start private spaceflight
Private spaceflight
Private spaceflight is flight above Earth altitude conducted by and paid for by an entity other than a government. In the early decades of the Space Age, the government space agencies of the Soviet Union and United States pioneered space technology augmented by collaboration with affiliated design...
, which was won by Space Ship One in 2004, becoming the first spaceship not funded by a government agency.

Several countries now have space programs; from related technology ventures to full fledged space programs with launch facilities. There are many scientific and commercial satellites in use today, with a total of hundreds of satellite
Satellite
In the context of spaceflight, a satellite is an object which has been placed into orbit by human endeavour. Such objects are sometimes called artificial satellites to distinguish them from natural satellites such as the Moon....
s in orbit, and several countries have plans to send humans into space.

The Space Age might also be considered to have begun much earlier than October 4, 1957, because on October 3, 1942, a German A4
Aggregate series
The Aggregate series was a set of rocket designs developed in 1933–1945 by a research program of Nazi Germany's army. Its greatest success was the A4, more commonly known as the V-2. The German word refers to a group of machines working together.-A1:...
rocket, a prototype version of the V-2 rocket
V-2 rocket
The V-2 rocket , technical name Aggregat-4 , was a ballistic missile that was developed at the beginning of the Second World War in Germany, specifically targeted at London and later Antwerp. The liquid-propellant rocket was the world's first long-range combat-ballistic missile and first known...
program, reached space. It thus became the first man-made object to enter space
Outer space
Outer space is the void that exists between celestial bodies, including the Earth. It is not completely empty, but consists of a hard vacuum containing a low density of particles: predominantly a plasma of hydrogen and helium, as well as electromagnetic radiation, magnetic fields, and neutrinos....
, albeit only briefly. Since this flight was undertaken in secrecy, it wasn't public knowledge for many years afterwards. Further, the German launch, as well as the subsequent sounding rocket
Sounding rocket
A sounding rocket, sometimes called a research rocket, is an instrument-carrying rocket designed to take measurements and perform scientific experiments during its sub-orbital flight. The origin of the term comes from nautical vocabulary, where to sound is to throw a weighted line from a ship into...
tests performed in both the United States and the Soviet Union during the late 1940s and early 1950s, were not considered significant enough to start a new age because they did not reach orbit. Having a rocket powerful enough to reach orbit meant that a nation had the ability to place a payload anywhere on the planet, or to use another term, possessed an inter-continental ballistic missile. The fact that after such a development nowhere on the planet was safe from a nuclear warhead is why the orbit standard is used to define when the space age started.