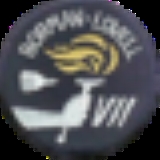 The original Gemini 6 mission, scheduled for launch on October 25, 1965 at 12:41 pm EDT, had a planned mission duration of 46 hours 47 minutes, completing a total of 29 orbits. It was to land in the western Atlantic Ocean south of Bermuda.

At 23 hours 55 minutes into the mission, while the spacecraft passed over White Sands, NM, the crew were to attempt to observe a laser beam originating from the ground.

The retro rockets were scheduled to be fired at 46 hours 10 minuttes into the mission while over the Pacific Ocean on the 29 orbit.

Original mission plans also included the first live television coverage of the recovery of a US spacecraft at sea from the recovery ship, the US aircraft carrier Wasp. The Wasp was fitted with ground station equipment to relay live television, via the Intelsat I
Intelsat I
Intelsat I was the first communications satellite to be placed in geosynchronous orbit, on April 6, 1965...
(nicknamed the "Early Bird" satellite).

However, after a control failure in the unmanned Agena target required its destruction six minutes after its liftoff (when the crew was already sitting in their capsule awaiting their launch), the mission was canceled.

Reviewing the situation, NASA decided to substitute an alternate mission: a meeting in space of two Gemini spacecraft. The new mission was designated Gemini 6A, to be launched eight days after the launch of Frank Borman
Frank Borman
Frank Frederick Borman, II is a retired NASA astronaut and engineer, best remembered as the Commander of Apollo 8, the first mission to fly around the Moon, making him, along with fellow crew mates Jim Lovell and Bill Anders, the first of only 24 humans to do so...
's and Jim Lovell
Jim Lovell
James "Jim" Arthur Lovell, Jr., is a former NASA astronaut and a retired captain in the United States Navy, most famous as the commander of the Apollo 13 mission, which suffered a critical failure en route to the Moon but was brought back safely to Earth by the efforts of the crew and mission...
's Gemini 7
Gemini 7
Gemini 7 was a 1965 manned spaceflight in NASA's Gemini program. It was the 4th manned Gemini flight, the 12th manned American flight and the 20th spaceflight of all time . The crew of Frank F. Borman, II and James A...
.

The first launch attempt of Gemini 6A was on December 12, 1965 at 9:54AM EST. All went well right up to ignition—in fact the engines did ignite, but then a plug fell out of the bottom of the rocket, starting the onboard computer. This was not meant to happen until the rocket had actually lifted off, and the onboard computer detected that there was no upwards motion, causing it to abort the launch. At this point mission rules dictated that the crew should eject from the spacecraft, as the rocket would explode on impact with the pad if it had lifted off by even an inch (2.54 cm).

Schirra elected not to eject as neither he nor Stafford had detected any upwards motion, and the ejection seats were seen as a last resort. In an early test of the system involving a dummy, the hatch had failed to blow off and the dummy's head was rammed into the side of the spacecraft. Also all ejection seats cause a dangerous compression of the spine as these were designed to carry the astronauts as quickly as possible (with the goal of evacuating the astronauts a couple of hundred meters away from an exploding rocket).

The Martin and Air Force teams who erected and tested the rocket found that some plugs on the rocket were able to pull out more easily than others. They replaced them with the ones that were harder to pull out on future missions, and a safety wire was added to make sure that the rocket had lifted off.

However, another problem was found as the engineers examined the thrust versus time graph. They found that the thrust rose nominally but started to decrease before the plug had fallen out. Through the night, engineers examined the rocket engine piece by piece until they found that a plastic cover had been left in the gas generator port. With this problem solved the rocket and spacecraft were rescheduled for a launch three days after the first attempt.

The third attempt to launch Gemini Spacecraft Number 6 (second attempt for the 6A mission) was successful on December 15. All went well through launch and ascent and the crew entered a 161 by 259 kilometers orbit, or as per the actual flight specifications, a 100 by 161 mile orbit.

The plan called for the rendezvous to take place on the fourth orbit of Gemini 6. Their first burn came 94 minutes after launch when they increased their speed by 5 meters per second, 16½ feet per second. Due to their lower orbit they were gaining on Gemini 7 and were only 730 miles, (or 1,175 kilometers), behind. The next burn was at 2 hours and 18 minutes when Gemini 6A made a phase adjustment to put them on the same orbital inclination as Gemini 7. They now only trailed by 483 kilometers, (300 miles).

The radar on Gemini 6 first made contact with Gemini 7
Gemini 7
Gemini 7 was a 1965 manned spaceflight in NASA's Gemini program. It was the 4th manned Gemini flight, the 12th manned American flight and the 20th spaceflight of all time . The crew of Frank F. Borman, II and James A...
at 3 hours and 15 minutes when they were 434 kilometers, (270 miles) away. A third burn put them into a 168 x 170 mile (270 by 274 kilometer) orbit. As they slowly gained, Schirra put Gemini 6's computer in charge of the rendezvous. At 5 hours and 4 minutes he saw a bright star that he thought was Sirius, but this was in fact Gemini 7. 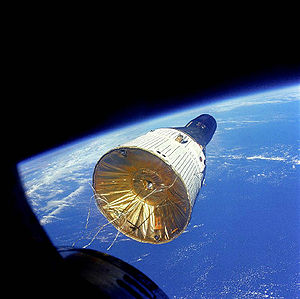 After several more burns the two spacecraft were only 130 feet, (40 meters) apart. The burns had only used 112 lbs., (51 kilograms) of fuel on Gemini 6, giving plenty of fuel for some fly arounds. During the next 270 minutes the crews moved as close as 1 foot, (30 centimetres), talking over the radio. At one stage the spacecraft were stationkeeping so well that neither crew had to make any burns for 20 minutes.

As the sleep periods approached, Gemini 6 made a separation burn and slowly drifted out to 10 miles, (16 kilometers). This ensured that there wouldn't be any accidental collisions in the night.

But before everyone went to sleep, the crew of Gemini 6 had a surprise for everyone:
At that point, the sound of "Jingle Bells
Jingle Bells
"Jingle Bells" is one of the best-known and commonly sung winter songs in the world. It was written by James Lord Pierpont and published under the title "One Horse Open Sleigh" in the autumn of 1857...
" was heard played on an 8-note Hohner "Little Lady" harmonica
Harmonica
The harmonica, also called harp, French harp, blues harp, and mouth organ, is a free reed wind instrument used primarily in blues and American folk music, jazz, country, and rock and roll. It is played by blowing air into it or drawing air out by placing lips over individual holes or multiple holes...
and a handful of small bells. The Smithsonian Institution
Smithsonian Institution
The Smithsonian Institution is an educational and research institute and associated museum complex, administered and funded by the government of the United States and by funds from its endowment, contributions, and profits from its retail operations, concessions, licensing activities, and magazines...
claims these were the first musical instruments played in space and keeps the instruments on display.

Gemini 6 reentered the next day, landing within 18 kilometres (11.2 mi) of the planned site northeast of Turks and Caicos in the Atlantic Ocean, the first truly accurate reentry. It was also the first splashdown and recovery to be televised live, through a transportable satellite earth station developed by ITT
ITT Corporation
ITT Corporation is a global diversified manufacturing company based in the United States. ITT participates in global markets including water and fluids management, defense and security, and motion and flow control...
on the deck of the recovery aircraft carrier USS Wasp
USS Wasp (CV-18)
USS Wasp was one of 24 s built during World War II for the United States Navy. The ship, the ninth US Navy ship to bear the name, was originally named Oriskany, but was renamed while under construction in honor of the previous , which was sunk 15 September 1942...
.

The Gemini 7 and 6A missions were supported by the following U.S. Department of Defense resources: 10,125 personnel, 125 aircraft and 16 ships.

Walter Schirra explained the patch in his book All We Did Was Fly to the Moon:
The original patch had called the flight GTA-6 (for Gemini-Titan-Agena) and showed the Gemini craft chasing an Agena. It was changed when the mission was altered to depict two Gemini spacecraft.

The spacecraft is currently on display at the Oklahoma History Center
Oklahoma History Center
The Oklahoma History Center is the history museum of the State of Oklahoma. Located across the street from the Governor's mansion at 2401 N. Laird Avenue in Oklahoma City, the museum opened in 2005 and is operated by the Oklahoma Historical Society...
in Oklahoma City
Oklahoma city
Oklahoma City is the capital and largest city of the U.S. state of Oklahoma.Oklahoma City may also refer to:*Oklahoma City metropolitan area*Downtown Oklahoma City*Uptown Oklahoma City*Oklahoma City bombing*Oklahoma City National Memorial...
, after having been on display at the Omniplex Science Museum
Omniplex Science Museum
The Science Museum Oklahoma is a science museum in Oklahoma City, Oklahoma. The museum is home to the Kirkpatrick Planetarium and a dome theater, as well as a number of specialized galleries.-History:...
elsewhere in the city. It is on a long term loan from the Smithsonian Institution
Smithsonian Institution
The Smithsonian Institution is an educational and research institute and associated museum complex, administered and funded by the government of the United States and by funds from its endowment, contributions, and profits from its retail operations, concessions, licensing activities, and magazines...
. Before coming to Oklahoma, the spacecraft was displayed at the St. Louis Science Center
St. Louis Science Center
The Saint Louis Science Center is a collection of buildings including a science museum and planetarium in St. Louis, Missouri, on the southeastern corner of Forest Park. The Planetarium opened in 1963, and it was expanded and renamed as the Saint Louis Science Center in 1983...
in St. Louis, Missouri
St. Louis, Missouri
St. Louis is an independent city on the eastern border of Missouri, United States. With a population of 319,294, it was the 58th-largest U.S. city at the 2010 U.S. Census. The Greater St...
.