Encyclopedia
Viking 1 was the first of two spacecraft sent to Mars
Mars
Mars is the fourth planet from the Sun in the Solar System. The planet is named after the Roman god of war, Mars. It is often described as the "Red Planet", as the iron oxide prevalent on its surface gives it a reddish appearance...
as part of NASA
NASA
The National Aeronautics and Space Administration is the agency of the United States government that is responsible for the nation's civilian space program and for aeronautics and aerospace research...
's Viking program
Viking program
The Viking program consisted of a pair of American space probes sent to Mars, Viking 1 and Viking 2. Each spacecraft was composed of two main parts, an orbiter designed to photograph the surface of Mars from orbit, and a lander designed to study the planet from the surface...
. It was the first spacecraft to successfully land on Mars and perform its mission, and until May 19, 2010 held the record for the second longest Mars surface mission of 6 years and 116 days (from landing until surface mission termination, Earth time).

Following launch using a Titan
Titan IIIE
The Titan IIIE or Titan 3E, also known as Titan III-Centaur was an American expendable launch system, launched seven times between 1974 and 1977...
/Centaur
Centaur (rocket stage)
Centaur is a rocket stage designed for use as the upper stage of space launch vehicles. Centaur boosts its satellite payload to geosynchronous orbit or, in the case of an interplanetary space probe, to or near to escape velocity...
launch vehicle on August 20, 1975 and a 10-month cruise to Mars, the orbiter began returning global images of Mars about 5 days before orbit insertion. The Viking 1 Orbiter was inserted into Mars orbit on June 19, 1976 and trimmed to a 1513 x 33,000 km, 24.66 h site certification orbit on June 21. Landing on Mars was planned for July 4, 1976, the United States Bicentennial
United States Bicentennial
The United States Bicentennial was a series of celebrations and observances during the mid-1970s that paid tribute to the historical events leading up to the creation of the United States as an independent republic...
, but imaging of the primary landing site showed it was too rough for a safe landing. The landing was delayed until a safer site was found. The lander separated from the orbiter on July 20 08:51 UTC and landed at 11:53:06 UTC. It was the first attempt by the United States at landing on Mars.

The instruments of the orbiter
Orbiter
An orbiter is a space probe that orbits a planet.-Asteroids:*NEAR Shoemaker...
consisted of two vidicon cameras for imaging (VIS), an infrared spectrometer for water vapor mapping (MAWD) and infrared radiometers for thermal mapping (IRTM). The orbiter
Orbiter
An orbiter is a space probe that orbits a planet.-Asteroids:*NEAR Shoemaker...
primary mission ended at the beginning of solar conjunction
Solar conjunction
Solar conjunction occurs when a planet or other solar system object is on the opposite side of the sun from the Earth. From an Earth reference, the object will pass between the sun and the Earth. Communication with any spacecraft in solar conjunction will be severely limited due to the sun's...
on November 5, 1976. The extended mission commenced on December 14, 1976 after solar conjunction. Operations included close approaches to Phobos
Phobos (moon)
Phobos is the larger and closer of the two natural satellites of Mars. Both moons were discovered in 1877. With a mean radius of , Phobos is 7.24 times as massive as Deimos...
in February 1977. The periapsis
Apsis
An apsis , plural apsides , is the point of greatest or least distance of a body from one of the foci of its elliptical orbit. In modern celestial mechanics this focus is also the center of attraction, which is usually the center of mass of the system...
was reduced to 300 km on March 11, 1977. Minor orbit adjustments were done occasionally over the course of the mission, primarily to change the walk rate — the rate at which the areocentric longitude changed with each orbit, and the periapsis was raised to 357 km on July 20, 1979. On August 7, 1980 Viking 1 Orbiter was running low on altitude control gas and its orbit was raised from 357 × 33943 km to 320 × 56000 km to prevent impact with Mars and possible contamination until the year 2019. Operations were terminated on August 17, 1980 after 1485 orbits.

The lander and its aeroshell separated from the orbiter on July 20 08:51 UTC. At the time of separation, the lander was orbiting at about 4 km/s. The aeroshell's retrorockets fired to begin the lander deorbit maneuver. After a few hours at about 300 km altitude, the lander was reoriented for atmospheric entry. The aeroshell with its ablative heat shield
Heat shield
A heat shield is designed to shield a substance from absorbing excessive heat from an outside source by either dissipating, reflecting or simply absorbing the heat...
slowed the craft as it plunged through the atmosphere. During this time, entry science experiments were performed by using a retarding potential analyzer, a mass spectrometer, and pressure, temperature and density sensors. At 6 km altitude, traveling at about 250 m/s, the 16 m diameter lander parachutes deployed. Seven seconds later the aeroshell was jettisoned, and 8 seconds after that the three lander legs were extended. In 45 seconds the parachute
Parachute
A parachute is a device used to slow the motion of an object through an atmosphere by creating drag, or in the case of ram-air parachutes, aerodynamic lift. Parachutes are usually made out of light, strong cloth, originally silk, now most commonly nylon...
had slowed the lander to 60 m/s. At 1.5 km altitude, retrorockets on the lander itself were ignited and, 40 seconds later at about 2.4 m/s, the lander arrived on Mars with a relatively light jolt. The legs had honeycomb aluminum shock absorbers to soften the landing.

The landing rockets used an 18 nozzle design to spread the hydrogen and nitrogen exhaust over a large area. NASA calculated that this approach would mean that the surface would not be heated by more than one degree Celsius, and that it would move no more than 1mm of surface material. Since most of Viking's experiments focused on the surface material a more straightforward design would not have served.

The Viking 1 Lander touched down in western Chryse Planitia
Chryse Planitia
Chryse Planitia is a smooth circular plain in the northern equatorial region of Mars close to the Tharsis region to the west, centered at . Chryse Planitia lies partially in the Lunae Palus quadrangle and partially in the Oxia Palus quadrangle...
("Golden Plain") at 22.697°N 48.222°W at a reference altitude of −2.69 km relative to a reference ellipsoid with an equatorial radius of 3397.2 km and a flatness of 0.0105 (22.480° N, 47.967° W planetographic) at 11:53:06 UT (16:13 local Mars time). Approximately 22 kg of propellants were left at landing.

Transmission of the first surface image began 25 seconds after landing and took about 4 minutes. During these minutes the lander activated itself. It erected a high-gain antenna pointed toward Earth for direct communication and deployed a meteorology boom mounted with sensors. In the next 7 minutes the second picture of the 300° panoramic scene (displayed below) was taken.
On the day after the landing the first color picture of the surface of Mars was taken. This first color image has since been lost or misplaced. Additionally, the seismometer failed to uncage, and a sampler arm locking pin was stuck and took 5 days to shake out. Otherwise, all experiments functioned nominally. The lander had two means of returning data to earth: a relay link up to the orbiter and back, and by using a direct link to earth. The data capacity of the relay link was about 10 times higher than the direct link.

The lander had two facsimile cameras, three analyses for metabolism, growth or photosyntheses, a gas chromatograph-mass spectrometer (GCMS), an x-ray fluorescence spectrometer, pressure, temperature and wind velocity sensors, a three-axis seismometer, a magnet on a sampler observed by the cameras, and various engineering sensors.

The Viking 1 Lander was named the Thomas Mutch
Thomas A. Mutch
Thomas A. Mutch was an American geologist and planetary scientist. He was a professor at Brown University from 1960 until his death. He was presumed killed when he disappeared during descent from Mount Nun in the Kashmir Himalayas.He published two books about the geology of the Moon and of Mars...
Memorial Station in January 1982 in honor of the leader of the Viking imaging team. The lander operated for 2245 sols (about 2306 earth days or 6 years) until November 11, 1982, when a faulty command sent by ground control resulted in loss of contact. The command was intended to uplink new battery charging software to improve the lander's deteriorating battery capacity, but it inadvertently overwrote data used by the antenna pointing software. Attempts to contact the lander during the next four months, based on the presumed antenna position, were unsuccessful. In 2006 the Viking 1 lander was imaged on the Martian surface by the Mars Reconnaissance Orbiter
Mars Reconnaissance Orbiter
Mars Reconnaissance Orbiter is a NASA multipurpose spacecraft designed to conduct reconnaissance and Exploration of Mars from orbit...
.

Viking carried a biology experiment whose purpose was to look for evidence of life. The Viking biology experiment weighed 15.5 kg (34 lbs) and consisted of three subsystems: the Pyrolytic Release experiment (PR), the Labeled Release experiment (LR), and the Gas Exchange experiment (GEX). In addition, independent of the biology experiments, Viking carried a Gas Chromatograph/Mass Spectrometer (GCMS) that could measure the composition and abundance of organic compounds in the martian soil. The results were surprising and interesting: the GCMS gave a negative result; the PR gave a negative result, the GEX gave a negative result, and the LR gave a positive result. Viking scientist Patricia Straat recently stated, "Our (LR) experiment was a definite positive response for life, but a lot of people have claimed that it was a false positive for a variety of reasons." Most scientists now believe that the data were due to inorganic chemical reactions of the soil; however, this view may be changing after the recent discovery of near-surface ice near the Viking landing zone. Some scientists still believe the results were due to living reactions. No organic chemicals were found in the soil. However, dry areas of Antarctica do not have detectable organic compounds either, but they have organisms living in the rocks. Mars has almost no ozone layer, unlike the Earth, so UV light sterilizes the surface and produces highly reactive chemicals such as peroxides that would oxidize any organic chemicals. The Phoenix Lander discovered the chemical perchlorate
Perchlorate
Perchlorates are the salts derived from perchloric acid . They occur both naturally and through manufacturing. They have been used as a medicine for more than 50 years to treat thyroid gland disorders. They are used extensively within the pyrotechnics industry, and ammonium perchlorate is also a...
in the Martian Soil. Perchlorate is a strong oxidant so it may have destroyed any organic matter on the surface. If it is widespread on Mars, carbon-based life would be difficult at the soil surface. 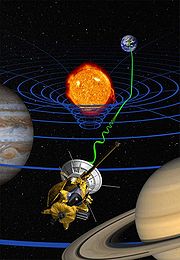