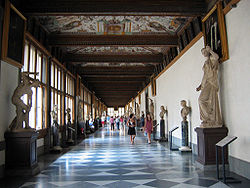 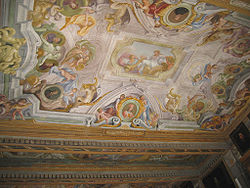 The Uffizi Gallery , is a museum in Florence, Italy
Italy
Italy , officially the Italian Republic languages]] under the European Charter for Regional or Minority Languages. In each of these, Italy's official name is as follows:;;;;;;;;), is a unitary parliamentary republic in South-Central Europe. To the north it borders France, Switzerland, Austria and...
. It is one of the oldest and most famous art museums of the Western world
Western world
The Western world, also known as the West and the Occident , is a term referring to the countries of Western Europe , the countries of the Americas, as well all countries of Northern and Central Europe, Australia and New Zealand...
.

The Palazzo degli Uffizi brought together under one roof the administrative offices, the Tribunal and the state archive (Archivio di Stato). The project that was planned by Cosimo I, Grand Duke of Tuscany to arrange that prime works of art in the Medici collections on the piano nobile was effected by Francis I of Tuscany
Francesco I de' Medici, Grand Duke of Tuscany
Francesco I de' Medici, Grand Duke of Tuscany was the second Grand Duke of Tuscany, ruling from 1574 to 1587.- Biography :...
, who commissioned from Buontalenti the famous Tribuna degli Uffizi
Tribuna of the Uffizi
The Tribuna of the Uffizi is an octagonal room in the Uffizi gallery, Florence, Italy. Designed by Bernardo Buontalenti for Francesco I de' Medici in the late 1580s, the most important antiquities and High Renaissance and Bolognese paintings from the Medici collection were and still are displayed...
that united a selection of the outstanding masterpieces in the collection in an ensemble that was a star attraction of the Grand Tour
Grand Tour
The Grand Tour was the traditional trip of Europe undertaken by mainly upper-class European young men of means. The custom flourished from about 1660 until the advent of large-scale rail transit in the 1840s, and was associated with a standard itinerary. It served as an educational rite of passage...
.

Over the years, further parts of the palace evolved into a display place for many of the paintings and sculpture collected by the Medici
Medici
The House of Medici or Famiglia de' Medici was a political dynasty, banking family and later royal house that first began to gather prominence under Cosimo de' Medici in the Republic of Florence during the late 14th century. The family originated in the Mugello region of the Tuscan countryside,...
family or commissioned by them. According to Vasari
Giorgio Vasari
Giorgio Vasari was an Italian painter, writer, historian, and architect, who is famous today for his biographies of Italian artists, considered the ideological foundation of art-historical writing.-Biography:...
, who was not only the architect of the Uffizi but also the author of Lives of the Artists, published in 1550 and 1568, artists such as Leonardo da Vinci
Leonardo da Vinci
Leonardo di ser Piero da Vinci was an Italian Renaissance polymath: painter, sculptor, architect, musician, scientist, mathematician, engineer, inventor, anatomist, geologist, cartographer, botanist and writer whose genius, perhaps more than that of any other figure, epitomized the Renaissance...
and Michelangelo
Michelangelo
Michelangelo di Lodovico Buonarroti Simoni , commonly known as Michelangelo, was an Italian Renaissance painter, sculptor, architect, poet, and engineer who exerted an unparalleled influence on the development of Western art...
gathered at the Uffizi "for beauty, for work and for recreation."

After the house of Medici was extinguished, the art treasures remained in Florence by terms of the famous Patto di famiglia negotiated by Anna Maria Luisa
Anna Maria Luisa de' Medici
Anna Maria Luisa de' Medici was the last scion of the House of Medici. A patron of the arts, she bequeathed the Medici's large art collection, including the contents of the Uffizi, Palazzo Pitti and the Medicean villas, which she inherited upon her brother Gian Gastone's death in 1737, and her...
, the last Medici heiress; it formed one of the first modern museums. The gallery had been open to visitors by request since the sixteenth century, and in 1765 it was officially opened to the public.

Because of its huge collection, some of its works have in the past been transferred to other museums in Florence — for example, some famous statue
Statue
A statue is a sculpture in the round representing a person or persons, an animal, an idea or an event, normally full-length, as opposed to a bust, and at least close to life-size, or larger...
s, to the Bargello
Bargello
The Bargello, also known as the Bargello Palace or Palazzo del Popolo is a former barracks and prison, now an art museum, in Florence, Italy.-Terminology:...
. A project is currently underway to expand the museum's exhibition space by 2006 from some 6,000 metres² (64,000 ft²) to almost 13,000 metres² (139,000 ft²), allowing public viewing of many artwork
Work of art
A work of art, artwork, art piece, or art object is an aesthetic item or artistic creation.The term "a work of art" can apply to:*an example of fine art, such as a painting or sculpture*a fine work of architecture or landscape design...
s that have usually been in storage.

In 1993, a car bomb exploded in Via dei Georgofili and damaged parts of the palace, killing five people. The most severe damage was to the Niobe
Niobe
Niobe was a daughter of Tantalus and of either Dione, the most frequently cited, or of Eurythemista or Euryanassa, and she was the sister of Pelops and Broteas, all of whom figure in Greek mythology....
room, the classical sculptures and neoclassical
Neoclassicism
Neoclassicism is the name given to Western movements in the decorative and visual arts, literature, theatre, music, and architecture that draw inspiration from the "classical" art and culture of Ancient Greece or Ancient Rome...
interior of which have been restored, although its fresco
Fresco
Fresco is any of several related mural painting types, executed on plaster on walls or ceilings. The word fresco comes from the Greek word affresca which derives from the Latin word for "fresh". Frescoes first developed in the ancient world and continued to be popular through the Renaissance...
es were damaged beyond repair. The identity of the bomber or bombers are unknown, although it was almost certainly attributable to the Sicilian Mafia who were engaged in a period of terrorism at that time.

Today, the Uffizi is one of the most popular tourist attraction
Tourist attraction
A tourist attraction is a place of interest where tourists visit, typically for its inherent or exhibited cultural value, historical significance, natural or built beauty, or amusement opportunities....
s of Florence. In high season (particularly in July), waiting times can be up to five hours. Visitors who reserve a ticket in advance have a substantially shorter wait.

In early August 2007, Florence was caught with a large rainstorm, and the Gallery was partially flooded, with water leaking through the ceiling, and the visitors had to be evacuated. There was a much more significant flood in 1966
1966 Flood of the River Arno in Florence
The 1966 Flood of the Arno River in Florence killed many people and damaged or destroyed millions of masterpieces of art and rare books in Florence. It is considered the worst flood in the city's history since 1557. With the combined effort of Italian citizens and foreign donors and committees, or...
which damaged most of the art collections in Florence severely, including the Uffizi.

Here is a selection from the collection of paintings:

The collection also contains some ancient sculptures, such as the Arrotino
Arrotino
The Arrotino , or formerly the Scythian, thought to be a figure from a group representing the Flaying of Marsyas is a Hellenistic-Roman sculpture of a man crouching to sharpen a knife on a whetstone.The sculpture was excavated in the early sixteenth century, for it is recognizable in an inventory...
and the Two Wrestlers.