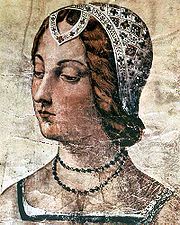 Laura de Noves was the wife of Count Hugues de Sade (ancestor of Marquis de Sade
Marquis de Sade
Donatien Alphonse François, Marquis de Sade was a French aristocrat, revolutionary politician, philosopher, and writer famous for his libertine sexuality and lifestyle...
). She could be the Laura that the Humanist poet Francesco Petrarch
Petrarch
Francesco Petrarca , known in English as Petrarch, was an Italian scholar, poet and one of the earliest humanists. Petrarch is often called the "Father of Humanism"...
wrote about extensively; however, she has never been positively identified as such. Laura had a great influence on Petrarch's life and lyrics. The historical information on Laura is meager at best.

Born 6 years after Petrarch in 1310 in Avignon
Avignon
Avignon is a French commune in southeastern France in the départment of the Vaucluse bordered by the left bank of the Rhône river. Of the 94,787 inhabitants of the city on 1 January 2010, 12 000 live in the ancient town centre surrounded by its medieval ramparts.Often referred to as the...
, she was the daughter of a knight, Audibert de Noves and his wife Ermessenda. She married at the age of 15 (16 January 1325) and Petrarch saw her for the first time two years later on 6 April (Good Friday) in 1327 at Easter mass in the church of Sainte-Claire d'Avignon.

Not much is known about her other than she did have a large family, was a virtuous wife, and died in 1348. Since this first encounter with Laura, Petrarch spent the next three years in Avignon
Avignon
Avignon is a French commune in southeastern France in the départment of the Vaucluse bordered by the left bank of the Rhône river. Of the 94,787 inhabitants of the city on 1 January 2010, 12 000 live in the ancient town centre surrounded by its medieval ramparts.Often referred to as the...
singing his purely platonic love
Platonic love
Platonic love is a chaste and strong type of love that is non-sexual.-Amor Platonicus:The term amor platonicus was coined as early as the 15th century by the Florentine scholar Marsilio Ficino. Platonic love in this original sense of the term is examined in Plato's dialogue the Symposium, which has...
and haunting Laura in church and on her walks. After this Petrarch left Avignon and went to Lombez
Lombez
Lombez is a commune in the Gers department in southwestern France.-Population:-References:*...
(a French department of Gers
Gers
The Gers is a department in the Midi-Pyrénées region in the southwest of France named after the Gers River.Inhabitants are called les Gersois or Gersoises.-History:...
) where he held a canonry gifted by Pope Benedict XII
Pope Benedict XII
Pope Benedict XII , born Jacques Fournier, the third of the Avignon Popes, was Pope from 1334 to 1342.-Early life:...
. Her possible tomb could have been discovered by the French poet Maurice Scève
Maurice Scève
Maurice Scève , French poet, was born at Lyon, where his father practised law.He was the centre of the Lyonnese côterie that elaborated the theory of spiritual love, derived partly from Plato and partly from Petrarch...
in 1533.

In 1337 he returned to Avignon and bought a small estate at Vaucluse
Vaucluse
The Vaucluse is a department in the southeast of France, named after the famous spring, the Fontaine-de-Vaucluse.- History :Vaucluse was created on 12 August 1793 out of parts of the departments of Bouches-du-Rhône, Drôme, and Basses-Alpes...
to be near his dear Laura. Here for the next three years he wrote numerous sonnets in her praise. Petrarch's Canzoniere (Songbook) is the lyrics to her in the troubadour tradition of courtly love. They advanced the growth of Italian as a literary language. They also popularized this form of sonnet
Sonnet
A sonnet is one of several forms of poetry that originate in Europe, mainly Provence and Italy. A sonnet commonly has 14 lines. The term "sonnet" derives from the Occitan word sonet and the Italian word sonetto, both meaning "little song" or "little sound"...
that is called Petrarchan sonnet. Years after her death Petrarch wrote his Trionfi, which is a religious allegory
Allegory
Allegory is a demonstrative form of representation explaining meaning other than the words that are spoken. Allegory communicates its message by means of symbolic figures, actions or symbolic representation...
in which Laura is idealized.