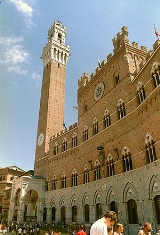 Encyclopedia
The Palazzo Pubblico is a palace in Siena
Siena
Siena is a city in Tuscany, Italy. It is the capital of the province of Siena.The historic centre of Siena has been declared by UNESCO a World Heritage Site. It is one of the nation's most visited tourist attractions, with over 163,000 international arrivals in 2008...
, Tuscany
Tuscany
Tuscany is a region in Italy. It has an area of about 23,000 square kilometres and a population of about 3.75 million inhabitants. The regional capital is Florence ....
, central Italy
Italy
Italy , officially the Italian Republic languages]] under the European Charter for Regional or Minority Languages. In each of these, Italy's official name is as follows:;;;;;;;;), is a unitary parliamentary republic in South-Central Europe. To the north it borders France, Switzerland, Austria and...
. Construction began in 1297 and its original purpose was to house the republican government, consisting of the Podestà
Podestà
Podestà is the name given to certain high officials in many Italian cities, since the later Middle Ages, mainly as Chief magistrate of a city state , but also as a local administrator, the representative of the Emperor.The term derives from the Latin word potestas, meaning power...
and Council of Nine.

The outside of the structure is an example of Italian medieval architecture with Gothic
Gothic architecture
Gothic architecture is a style of architecture that flourished during the high and late medieval period. It evolved from Romanesque architecture and was succeeded by Renaissance architecture....
influences. The lower story is stone; the upper crenelatted stories are made of brick. The facade
Facade
A facade or façade is generally one exterior side of a building, usually, but not always, the front. The word comes from the French language, literally meaning "frontage" or "face"....
of the palace is curved slightly inwards (concave) to reflect the outwards curve (convex) of the Piazza del Campo
Piazza del Campo
Piazza del Campo is the principal public space of the historic center of Siena, Tuscany, Italy and is one of Europe's greatest medieval squares. It is renowned worldwide for its beauty and architectural integrity. The Palazzo Pubblico and its Torre del Mangia, as well as various palazzi signorili...
, Siena's central square
Piazza
A piazza is a city square in Italy, Malta, along the Dalmatian coast and in surrounding regions. The term is roughly equivalent to the Spanish plaza...
of which the Palace is the focal point. The campanile or bell tower, Torre del Mangia
Torre del Mangia
The Torre del Mangia is a tower in Siena, in the Tuscany region of Italy. Built in 1338-1348, it is located in the Piazza del Campo, Siena's premier square, adjacent to the Palazzo Pubblico . When built it was one of the tallest secular towers in mediaeval Italy...
, was built between 1325 and 1344 with its crown designed by the painter, Lippo Memmi
Lippo Memmi
Lippo Memmi was an Italian painter from Siena. He was the foremost follower of Simone Martini, who was his brother-in-law....
. The tower was designed to be taller than the tower in neighboring rival Florence
Florence
Florence is the capital city of the Italian region of Tuscany and of the province of Florence. It is the most populous city in Tuscany, with approximately 370,000 inhabitants, expanding to over 1.5 million in the metropolitan area....
; at the time it was the tallest structure in Italy. It was fitted with a mechanical clock during the mid 14th century. Its design has been used as the basis for several other campaniles including the Dock Tower in Grimsby
Grimsby
Grimsby is a seaport on the Humber Estuary in Lincolnshire, England. It has been the administrative centre of the unitary authority area of North East Lincolnshire since 1996...
, England constructed in 1852 and the Joseph Chamberlain Memorial Clock Tower in the edgabston campus of the University of Birmingham
University of Birmingham
The University of Birmingham is a British Redbrick university located in the city of Birmingham, England. It received its royal charter in 1900 as a successor to Birmingham Medical School and Mason Science College . Birmingham was the first Redbrick university to gain a charter and thus...
(completed in 1908).

Nearly every major room in the palace contains fresco
Fresco
Fresco is any of several related mural painting types, executed on plaster on walls or ceilings. The word fresco comes from the Greek word affresca which derives from the Latin word for "fresh". Frescoes first developed in the ancient world and continued to be popular through the Renaissance...
es. These frescoes are unusual for the time in that they were commissioned by the governing body of the city, rather than by the Church or by a religious fraternity. They are also unusual in that many of them depict secular subjects instead of the religious subjects which are overwhelmingly typical of Italian art of this era. 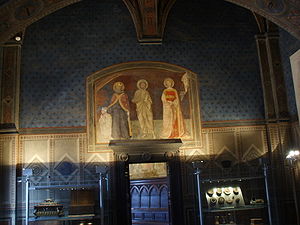 These frescoes are collectively known as Allegory and Effects of Good and Bad Government.

The Allegory of Good Government depicts the personification of Justice as a woman. She gestures to the scales of balance, held by the personification of Wisdom floating over her throne. On the viewer's left, a convicted criminal is beheaded; on the right, figures receive the rewards of justice. At Justice's feet, the personification of Virtue, also, unusually for the time, portrayed as a female figure, passes virtue among twenty four faithfully rendered and recognizable images of prominent male citizens of Siena. The men face towards the largest figure in the image, a judge located in the center right. The judge is surrounded by additional personifications including Peace, who is represented as a fashionable, white-clad contemporary female figure with elaborate blonde hair.

The allegory carries a strong social message of the value of the stable republican government of Siena. It combines elements of secular life with references to the importance of religion in the city at the time. The figure of Justice resembles the figure of Mary, Queen of Heaven, the patron saint of Siena, on a throne. The Judge reflects the tradition in the Christian Last Judgment to have God or Christ judging the saved on the left; the damned on the right. While classified as medieval or proto (pre)-renaissance art, these paintings show a transition in thought and an evolution in theme from earlier religious art.

Flanking the Allegory are two other paintings on perpendicular walls: Effects of Good Government and Effects of Bad Government. Both these frescoes depict a recognizable view of Siena and its countryside.

In the allegorical representation of Good Government, the prosperous townspeople are trading and dancing in the streets. Beyond the city walls is a lush countryside in which crops are harvested.

In the allegory of Bad Government, crime is rampant and diseased citizens roam a crumbling city. The countryside suffers from drought. 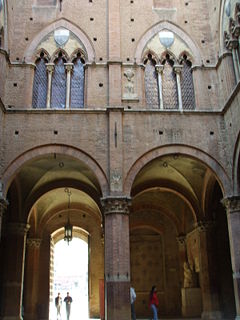 Many of the frescoes in the Palace, including these, are badly damaged. This is allegedly due to salt once stored in the basement of the building. It is theoretically possible that the salts wicked moisture down from the walls, causing the plaster to dry excessively and the frescoes to flake off.

Other notable frescoes include the mysterious fresco of Guidoriccio da Fogliano at the siege of Montemassi
Montemassi
Montemassi is a village in Tuscany, central Italy, administratively part of the comune of Roccastrada, in the province of Grosseto. It is located on a hill at c. 140 m over the sea level....
, located in the Great Council Hall (Sala del Mappamondo). The fresco is traditionally attributed to Simone Martini
Simone Martini
Simone Martini was an Italian painter born in Siena.He was a major figure in the development of early Italian painting and greatly influenced the development of the International Gothic style....
, although there is debate on the subject. The wall has circular markings left by the circular wall-mounted (now lost) map of the world by Ambrogio Lorenzetti
Ambrogio Lorenzetti
Ambrogio Lorenzetti was an Italian painter of the Sienese school. He was active between approximately 1317 to 1348. His elder brother was the painter Pietro Lorenzetti....
.

Siena was decimated by the Black Death
Black Death
The Black Death was one of the most devastating pandemics in human history, peaking in Europe between 1348 and 1350. Of several competing theories, the dominant explanation for the Black Death is the plague theory, which attributes the outbreak to the bacterium Yersinia pestis. Thought to have...
in 1348. Approximately half the population died in the plague. The republic's economy was destroyed and the state quickly declined from its position of prominence in Italy. The Franciscan
Franciscan
Most Franciscans are members of Roman Catholic religious orders founded by Saint Francis of Assisi. Besides Roman Catholic communities, there are also Old Catholic, Anglican, Lutheran, ecumenical and Non-denominational Franciscan communities....
religious order rose to power in the city. The stagnation over the following centuries meant that while Siena did not develop during the Renaissance
Renaissance
The Renaissance was a cultural movement that spanned roughly the 14th to the 17th century, beginning in Italy in the Late Middle Ages and later spreading to the rest of Europe. The term is also used more loosely to refer to the historical era, but since the changes of the Renaissance were not...
as did other Italian cities, it was also preserved both from bombardment during World War II
World War II
World War II, or the Second World War , was a global conflict lasting from 1939 to 1945, involving most of the world's nations—including all of the great powers—eventually forming two opposing military alliances: the Allies and the Axis...
and from modern development.