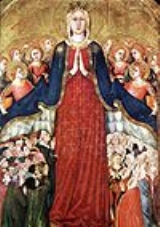 Encyclopedia
Lippo Memmi was an Italian
Italy
Italy , officially the Italian Republic languages]] under the European Charter for Regional or Minority Languages. In each of these, Italy's official name is as follows:;;;;;;;;), is a unitary parliamentary republic in South-Central Europe. To the north it borders France, Switzerland, Austria and...
painter from Siena
Siena
Siena is a city in Tuscany, Italy. It is the capital of the province of Siena.The historic centre of Siena has been declared by UNESCO a World Heritage Site. It is one of the nation's most visited tourist attractions, with over 163,000 international arrivals in 2008...
. He was the foremost follower of Simone Martini
Simone Martini
Simone Martini was an Italian painter born in Siena.He was a major figure in the development of early Italian painting and greatly influenced the development of the International Gothic style....
, who was his brother-in-law.

Together with Martini, in 1333 he painted, together with Martini, one of the masterworks of the International Gothic
International Gothic
International Gothic is a phase of Gothic art which developed in Burgundy, Bohemia, France and northern Italy in the late 14th century and early 15th century...
, the Annunciation with St. Margaret and St. Ansanus
Annunciation with St. Margaret and St. Ansanus
The Annunciation with St. Margaret and St. Ansanus is a painting by the Italian Gothic artists Simone Martini and Lippo Memmi, now housed in the Uffizi Gallery in Florence, Italy. It is a wooden triptych painted in tempera and gold, with a central panel having double size...
(now in the Uffizi
Uffizi
The Uffizi Gallery , is a museum in Florence, Italy. It is one of the oldest and most famous art museums of the Western world.-History:...
). He was one of the artists who worked at the Orvieto Cathedral, for which he finished the Madonna dei Raccomandati. Later he followed Martini at the Papal
Papal States
The Papal State, State of the Church, or Pontifical States were among the major historical states of Italy from roughly the 6th century until the Italian peninsula was unified in 1861 by the Kingdom of Piedmont-Sardinia .The Papal States comprised territories under...
court in Avignon
Avignon
Avignon is a French commune in southeastern France in the départment of the Vaucluse bordered by the left bank of the Rhône river. Of the 94,787 inhabitants of the city on 1 January 2010, 12 000 live in the ancient town centre surrounded by its medieval ramparts.Often referred to as the...
, where he worked until the mid-14th century.